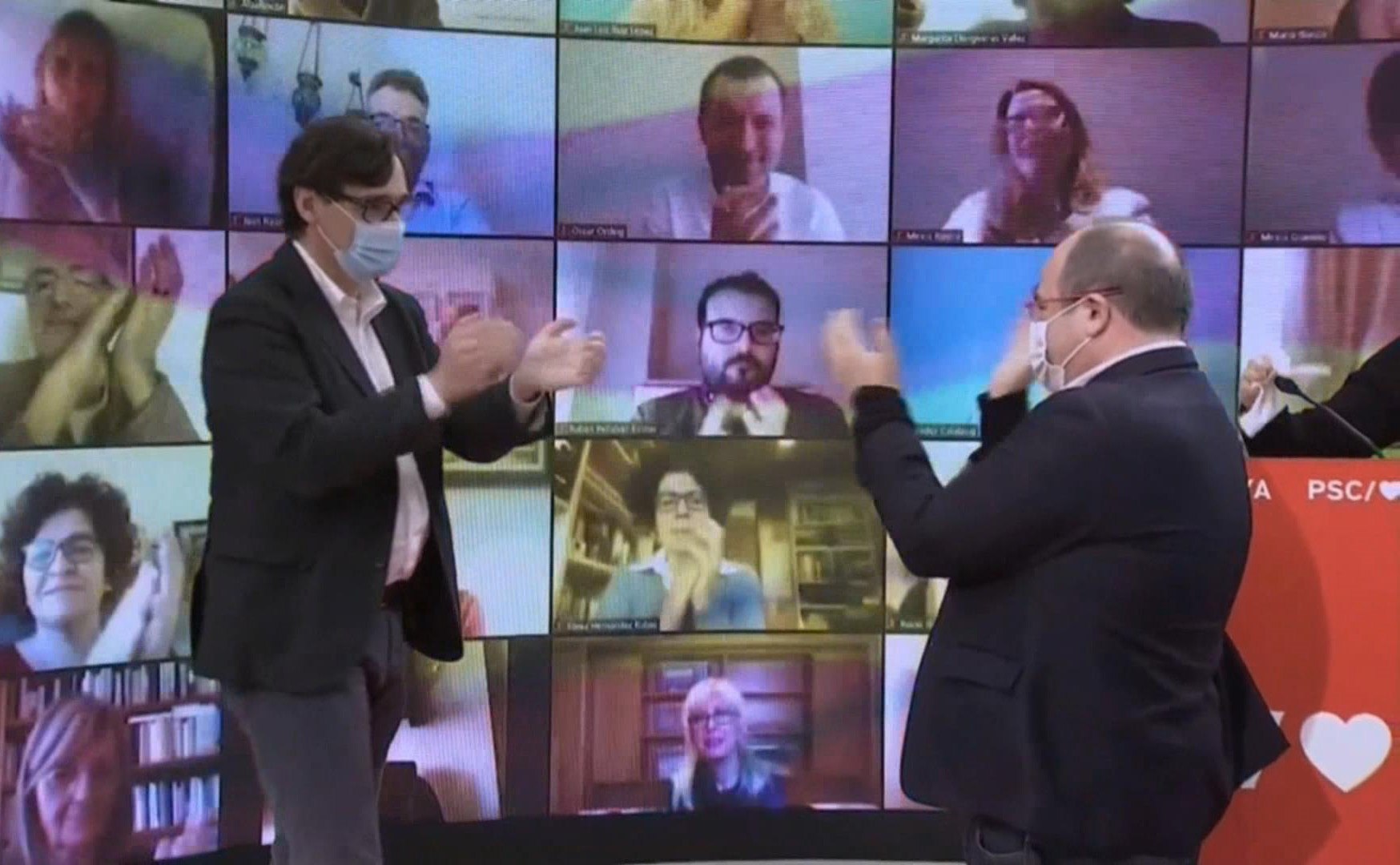 Three years after the failed declaration of independence, Catalonia faces the February 14 electoral campaign with the question of whether secessionism will revalidate the absolute majority in seats and will surpass its target of 50% of the votes for the first time or if the citizens put first other priorities. It remains to be seen to what extent the announced candidacy of Minister Salvador Illa to build an alternative government and emulate the one that Catalonia had from 2003 to 2010, with the two tripartites, can influence the result.

EL PAÍS has asked the candidates of the ten formations with the possibility of obtaining parliamentary representation what they propose to solve the Catalan situation. In short, Junts per Catalunya, the party of Carles Puigdemont, fled in Brussels, is the only one that continues to openly defend the unilateral way to achieve secession. The CUP shares this path, but is open to forcing the State to accept an agreed referendum on independence before 2025. It is an approach shared by Esquerra Republicana and which Catalonia seems to have renounced in Comú Podem, which claims to “strengthen self-government” . PDeCAT also calls for a referendum, but with international recognition, and the Partit Nacionalista de Catalunya (PNC) rejects the unilateral way. The PSC, Ciudadanos and the PP agree that the stage of the independence government must be overcome, although with notable nuances. Socialists speak of “building bridges”; for the orange formation the important thing is to offer society “security and political stability” and the popular ones want to “achieve political alternation for the first time.” With the prediction of the polls that several deputies will achieve, Vox claims “the freedom of millions of Catalans oppressed by separatism and the ideological offensive of the left.”

The social division that led to the unilateral declaration of independence approved by the Parliament on October 27, 2017, the subsequent application of Article 155 of the Constitution and the imprisonment of the leaders of the process They have led the independence movement to modulate its political proposal. In the absence of concreteness in the electoral programs, these forces continue to claim the independence of Catalonia as their goal, but in some cases they go through other channels. Thus, Carles Puigdemont’s party rhetorically proposes “to activate the 2017 declaration of independence with the purpose of making effective the constitution of Catalonia as an independent state in the form of a republic”, an expression that is a carbon copy of the referendum question illegal on October 1, 2017. Junts has been left alone airing that flag that still connects with tens of thousands of citizens. The former president as head of the electoral cartel is an important part of the strategy, knowing that he will never be invested and that the effective candidate is Laura Borràs.

“We are independentists and we don’t need to carry a flag in our hand to see that we are. The gesticulation, for others ”, assures Pere Aragonès, vice president of the Generalitat and candidate of ERC. His proposal is “the broad path to independence, be more, exceed 50%” of the votes and thus “put an end to repression and force the State to accept the right of self-determination.” The word that Republicans claim over and over again throughout this process is “dialogue.”

The CUP agrees with nuances in demanding a “broad front” to bring together “sovereignist and leftist policies.” Its headliner is Dolors Sabater, former mayor of Badalona, ​​who is not a member of the party. He assures that they would govern with Junts or Esquerra to “condition institutional policy.” Their strategy is different. “We have to mark distance with tear gas projects,” they say. They continue to expressly claim disobedience and warn that “independence cannot be the magic solution proposed by a messianic leader.”

Salvador Illa, the candidate of the PSC, maintains that his project “is the only one that can prosper” to overcome “the independence drift that has divided society without obtaining any progress or crystallizing in greater powers, investments, projects or push for Catalonia” . His alternative is to “build bridges within Catalonia and Catalonia with the rest of the towns in Spain.” Faced with the independence movement, he proposes “deepening self-government and relations between Spanish institutions.” The Socialists resigned in the 2015 elections to the legal and agreed consultation that they defended until then and that the PSC fractured. “We cannot waste any more time or energy. We are tired of frustration and divisions, of trenches being dug and walls erected, ”says Illa.

The independence movement is running in the elections with two new brands. One is PDeCAT, the party that Puigdemont and most of his own left, but which Artur Mas continues to support with his small mouth. His candidate is Àngels Chacón, company counselor with Quim Torra until shortly before he left the presidency after being disqualified. “PDeCAT believes in an independent Catalonia to improve the well-being of Catalans, but the strategy must change. We do not believe in continuous confrontation, nor in the simple 50%. We believe in good government ”, says Chacón, who claims to“ overcome the current disorientation ”caused by Esquerra,“ an overwhelmed party ”, and Junts,“ more pending of confrontation than governing ”. His political proposal requires the Spanish Government to have “enough courage to respond to more than two million Catalans” and accept a referendum.

The other new electoral brand is the Partit Nacionalista de Catalunya (PNC) led by Marta Pascal, former PDeCAT coordinator and deputy in 2017. For that party, independence is not a priority issue. “Let’s turn the page on confrontation, one-sidedness and disobedience,” says Pascal. “We will not give support to any candidate who does not expressly resign because our proposal is to prioritize the reactivation of Catalonia, get out of the pandemic and make a clear commitment to the economic agreement that allows us to manage all taxes from Catalonia.”

Carlos Carrizosa, candidate of Ciudadanos, the party that won the elections in 2017 and for which all polls predict a notable setback, assures that “we must shelve once and leave this decade horribilis what Catalonia has been through ”. “It is not possible that we continue to impoverish ourselves, that the 7,000 companies that left will not return,” he says. His priority is “to end the division of society.” He also assures that “the socialists are not to be trusted” and that they will try a new tripartite, the same accusation that Junts launches against Esquerra, reports Blanca Cia. He also recalls that he will make clear his opposition to the prisoners of the process may be pardoned.

Jéssica Albiach, candidate from Catalonia in Comú Podem, thinks that the “national question” has been “frozen” in the face of the emergencies caused by the health crisis, but it has not disappeared and is very present in Catalan society. “The independence leaders who led the events are still in prison and this is a wound for the independence movement and the entire country.” His alternative is “a new Catalanism that updates the great consensus of Catalan society, fraternally commits itself to the transformation of Spain and advances towards the horizon of a federal plurinational republic.”

Alejandro Fernández, PP candidate, highlights three issues when raising the future of Catalonia: “Coexistence from harmony and dialogue within the framework of the law, as was done in the Transition”; political alternation, “because in Catalonia the nationalists have always ruled”, and “reasonable governance, because if the key is held by the CUP, we already know the consequences.”

Ignacio Garriga, the head of Vox, declares that “Catalonia is an essential part of Spain and has always been, like Galicia, Extremadura or Murcia”. “Separatism has invented a propaganda farce that does not correspond to the history of the region or to the feelings of the Catalans. His only objective has always been to divide us and end the diversity of the region ”, he assures.

“We must abandon the horrible decade that we have passed in Catalonia. It is not possible that we continue to impoverish ourselves and that the 7,000 companies that left will not return. Security and political stability are needed ”.

Laura Borràs (Together for Catalonia)

“We are committed to working with the objective of activating the declaration of independence and making effective the constitution of Catalonia as an independent state in the form of a republic.”

“Broad path to independence, exceed 50%, put an end to the repression and force the State to accept the right of self-determination and amnesty as the only possible path for prisoners and exiles.”

“The pro-independence drift has divided society without further powers, investments or push for Catalonia. We want to build bridges within Catalonia and Catalonia with the rest of the towns in Spain ”.

Jéssica Albiach (Catalonia in Common We Can)

“A new Catalanism that is fraternally committed to the transformation of Spain and progress towards a federal plurinational republic. An agreement of broad majorities to strengthen self-government ”.

“Assume all responsibilities to condition institutional policy, put disobedience on the table and force the State to recognize the right to self-determination and hold a referendum.”

“Coexistence from harmony and dialogue within the framework of the law, as in the Transition, political alternation as part of the solution and reasonable governance so as not to depend on the CUP.”

“We do not believe in the continued confrontation, nor in the simple 50%. The independence movement in Catalonia is a political issue that will be resolved through an agreed and internationally recognized referendum ”.

“Let’s turn the page of confrontation, one-sidedness and disobedience. We must get out of the pandemic and make a clear commitment to an economic agreement that allows us to manage all taxes.

“We have come to vindicate the proud Catalonia of its belonging to Spain, like Extremadira or Murcia, and the freedom of millions of Catalans oppressed by separatism and the ideological offensive of the left.”