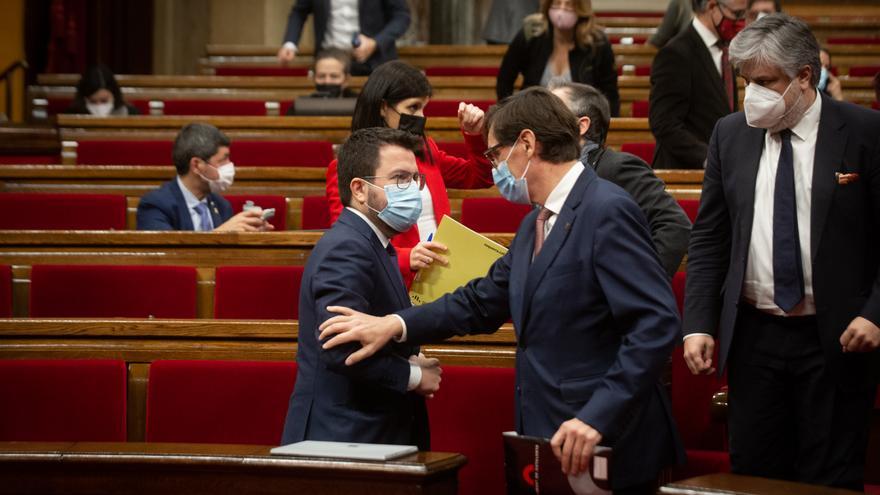 Those veteran palates who wandered this Thursday through the Parliament detected the nuances of oak in the flavor of the plenary session that led to the final approval of the budgets of the Generalitat by 2022. As of December 23 and effective on January 1. It seems obvious and easy, but this has not happened for more than a decade. An aged flavor for which each one looks for an adjective. A placid, calm, even boring debate, something rare in Catalan politics in these two decades.

The pact of the bipartite Government of ERC and Junts with the ‘comuns’ (who allow approval thanks to their abstention) already supposes in itself one less point of controversial boiling in the hemicycle than if the agreement had been sanctioned, as everyone said they wanted , but nobody applied, with the CUP. And if we add to this that the session began at 12 o’clock after the pact between the parties of the Government and the first party of the Parliament, the PSC, for the distribution of the positions in the renewal of the organs of the Genaralitat all results in a chicha calm.

The Socialists, of course, continued to not support the accounts. Alicia Romero, the socialist spokesperson, took advantage of his reasons for the defense of his 327 amendments and criticized duplicities in the ‘conselleries’ … and even said that Jaume Giró’s project had disappointed him. He met the minimums, given that he began his own intervention recognizing that “it was good news that there are budgets and that these come into force when they play, something that had not happened since the time of ‘president’ Montilla,” he said. The maximum sharp criticism allowed is that they were “convergent” budgets. Something that Marta Vilalta (ERC) was not pleased with and tried to deny later.

The CUP breaks the drowsiness

The counterpoint came from the former partners (or are they still?) Of the CUP. The deputy Eulàlia Reguant saw them and managed to baptize this new atmosphere that floated in the room. It was clear to him that it smelled of the 90s, and he recovered that term of entente between CiU and the PSC that became known as ‘sociovergence’. But the inclusion in the ERC equation lexically dynamites the phrase. “The PSC does not vote on the budgets because Catalonia cannot afford that photo of three,” Reguant said as an image of the participation of the socialists on the margins of autonomous power.

And direct criticism of Aragonès. “You said that we were the preferred partners, but, To do what? Since we finished the investiture pact, by which you are ‘president’, Reguant reminded him, “we have not agreed on anything else,” he said.

The CUP, he added, “continues to ask that they return to the starting point, to lay the foundations for a new attack with the State in order to end the political conflict.” “Yes,” he said without interruption, “every time we have fewer expectations of them coming back to the deal because the ‘left to social’ (the neologism of the new times) advances ”impregnable.

Reguant was allowed to recommend to Aragonese a Christmas time of reflection, because, now the letters have been distributed, “this Government does not pass any motion of confidence”, in reference to one of the points of the investiture agreement by which the ‘president’ must undergo a debate, in 2023, when they are fulfilled two years of the work of the dialogue and negotiation table. Yes indeed. Now it is up to Aragonès to decide whether to submit to the procedure or not.

Junts’ economic spokesman, the former president of the Barcelona Chamber, Joan Canadell, opted for his usual third-way tone. He demanded, like the anti-capitalists, to lay the foundations for the “attack”, and that his majority was 52%, that is, the independence movement, but, at the same time, showed his support for these budgets that are approved thanks to the frequently reviled by him, ‘comuns’. The rest of the speech, very in his line. Complaint of the “fiscal spur” that, he predicted, this 2022, “will exceed 20,000 million euros.”

The technical architect of the accounts, the ‘conseller’, closed Jaume Giró who gathered the fruit of morning placidity. With a soft speech of forms and emphatically sovereign in the background, he also advocated that majority of 52% and vowed to return to it in July, when the 2023 budgets are addressed.