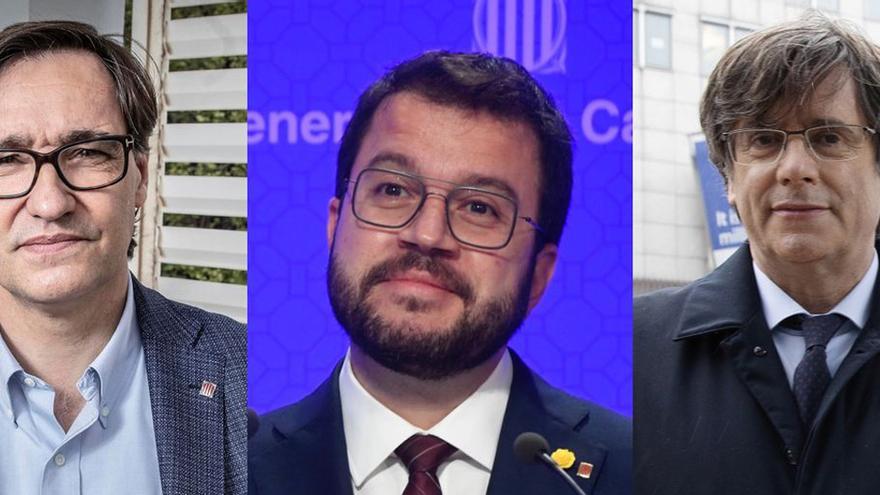 The winner of the Catalan elections of 14-F, Salvador Illa, remains the favorite option of the Catalans to lead the Generalitat. Above both Pere Aragonès, who tied in seats with the PSC, but obtaining 49,000 fewer votes, and the ‘former president’ Carles Puigdemont. The percentage of those who say they prefer the socialist exceeds the proportion of one in five Catalans, and although it falls with respect to the poll prior to the February elections, it provides them with a more than ample cushion with respect to their pursuers.

Specifically, according to GESOP survey for El Periódico de Catalunya 21.7% choose Illa out of the string of possible options, more than three points above Aragonese (18.4%). In third place is the leader of Junts per Catalunya, Carles Puigdemont, to almost three points, in turn (15,5%), your acting partner and adversary in ERC negotiations.

In the comparison with the January poll, prior to the 14-F elections, Illa, however, loses 2.7 support points, while Aragonès is made with 4.8 -35% – more. Puigdemont also improves the results that in January were taken with respect to the then president, Laura Borràs, in this case, in 1.1 points.

If a reading is done by blocks, depending on the ascription of the respondent to the independence sentiment, Puigdemont is chosen by 36.1% of the secessionist voters, for 31.1% who opt for Aragonese.

The difference between the two is that only 1.1% of non-independence supporters show their favoritism for the Waterloo resident and 9.1%, by the acting vice president, acting as president. For its part, Illa, collects 34.8% of bets in the non-independence electorate and 3.6% among those who support a secession.

Badly is, furthermore, the candidate who with more support among their own electorate, since 72.8% of those surveyed who voted on 14-F for the PSC prefer him as ‘president’. Very close, in terms of degree of fidelity, it is located Puigdemont with 70.1%, almost 18 points more than those achieved by Aragonès among his own (52.6%).

This little bulky pull of the Republican among his hosts is offset by the greater acceptance in the enemy trenches. Thus, for example, while a 11% of ERC voters favor Puigdemont, the 14.9% of Junts voters favor the acting vice president. In the comparison between Republican and Socialist electorates, Aragonès is also the winner, since 2.2% of ERC voters choose Illa, compared to 5.5% of Socialists who do so for him.

That being the case, why is the Republican almost three points from Illa? The key is to be found, again, in your electorate. While 7.2% of socialists and 8.5% of postconvergents choose the option “none of these candidates / other candidates”, Among the ranks of ERC this percentage rises to 17.7%.

Regarding the rest of the parties, the scarce pull of Dolors Sabater among the voters of the CUP stands out, only 31.5% of her voters on 14-F prefer her as president, which gives rise to the Anti-capitalist voters opt for Puigdemont (26.8%) and, to a lesser extent, for Aragonès (18.8%).

Interestingly, own Sabater is the most valued candidate of all, being the only one who stays at the door of the approved (4,9). They are followed by the rest of the leaders of left-wing parties, either also pro-independence, such as Sabater, that is, Aragonese (4.8); sovereignist, like Jessica Albiach (4.6) or federalist, like Island (4.5). Above 4 as a note, it is also worth mentioning Àngels Chacón from PDECat. Puigdemont is relegated to sixth position, with 3.7.

It is obvious that the valuation depends, to a large extent, on the degree of notoriety and, there, is the leader of Junts who almost touches 100% of knowledge among the electorate (99.7%), from which it can be deduced that it generates as many hatreds as loves. The former minister (95.5%) and the acting vice president (90.3%) complete the list of those who are known to more than nine out of 10 Catalans. Carlos Carrizosa (with a notoriety of 73.7% and a score of 2.3); Chacón (71.3%) and Sabater (70.6%) precede Albiach (65.2%) and the popular Alejandro Fernández (55.1% knowledge and a score of 3.1).

Valuation of the leaders by their possible Government partners.