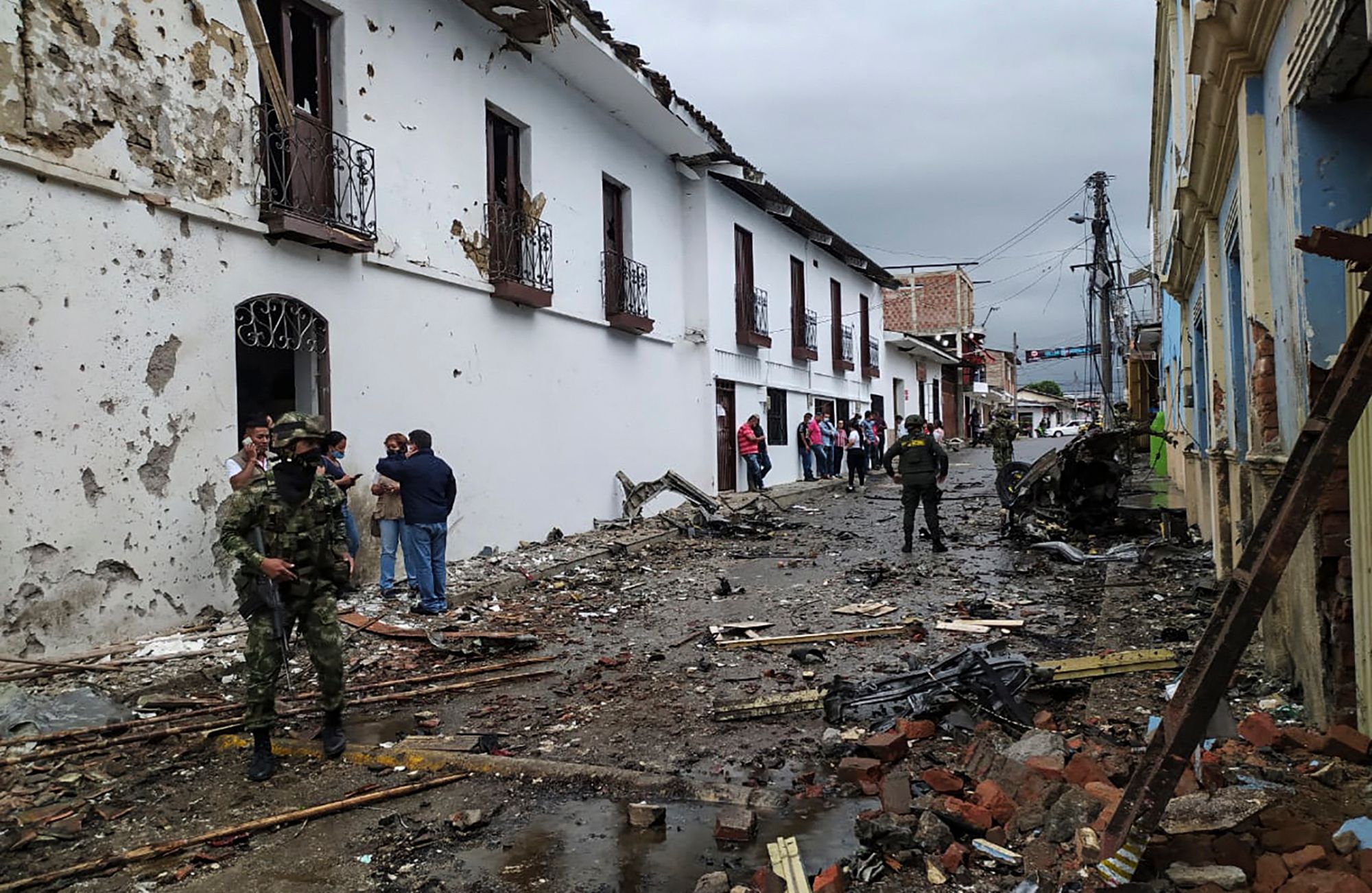 Peace has not reached Cauca, one of the departments hardest hit by the armed conflict that Colombia has sought to leave behind for four years, when it sealed the agreements with the FARC. The Andean country had become unaccustomed to photos of extreme violence, until last weekend it saw the debris left by the explosion of a car bomb in front of the mayor of Corinto, a municipality nestled in the mountains of that troubled region. The attack, which did not leave people dead but did dozens of wounded, has set off alarms. After the signing of the peace agreement, the violence did not cease in several territories and has even worsened.

El Cauca, a strategic place for drug trafficking routes due to its exit to the Pacific, has become a powder keg where an archipelago of illegal armed groups operate. Among them there are at least three dissidents from the defunct FARC, such as Dagoberto Ramos, who was blamed for the attack. The National Liberation Army (ELN) and the Gulf Clan, a drug trafficking gang inherited from paramilitary groups, also operate. Up to 20% of the inhabitants of Cauca, some 235,000 people, have been registered by the Government as victims of the armed conflict. The new stage of violence is more fragmented, without dominant actors.

“Here we know that those behind this attack are the bandits of Dagoberto Ramos. There is only one way left for them: they submit or we are going to confront them forcefully, ”said President Iván Duque when visiting Corinto. The government has resorted to old formulas, such as holding a security council, announcing the deployment of 2,000 additional soldiers to the 8,000 already in the department, and offering rewards for the leaders. The Defense Ministers, Diego Molano, and Interior, Daniel Palacios, toured the most affected municipalities on Wednesday with the promise of reinforcing demining operations and eradication of illicit crops, as well as guaranteeing the return of displaced families. But the violence is unleashed.

The car bomb explosion was not an isolated episode. Added to the attack are the clashes between dissidents and the ELN that have caused some 2,000 displaced persons in the municipality of Algeria. There, more than 6,000 civilians are exposed to the use of conventional and unconventional explosive devices by illegal armed actors, according to the Ombudsman’s Office, in charge of ensuring human rights. Also the kidnapping and subsequent murder of an official of the Public Prosecutor’s Office by Dagoberto Ramos when he was traveling on the highway that connects Santander de Quilichao with Corinto. All in a period of a few days since last weekend.

In the midst of the recent wave of massacres that has lowered Colombia to its darkest past, four massacres have also occurred in the department. The balance was 14 deaths so far in 2021, according to Indepaz, an NGO dedicated to issues of armed conflict. El Cauca has also occupied the first place in the incessant murder of social leaders throughout the country since the signing of the agreements. There the cultivation of coca leaves and marijuana converge creepy, illegal mining on the Pacific coast and conflicts over land.

“It is very rare that there is so much presence of the Armed Forces in Cauca and they are not able to control criminal structures, that so much military intelligence does not find those responsible, that they do not prevent the actions of armed groups and they are always late” , laments the senator and indigenous leader of Cauca Feliciano valencia, who was the target of an attack late last year. “The Government does not heed the early warnings issued by the Ombudsman’s Office to prevent criminal actions and the Army does not have a permanent presence in the territory. This is what causes the humanitarian crisis ”, he adds. The strategy of offering rewards is no longer effective and the capture of leaders does not weaken the dissidents because they do not have the same hierarchical structure as the FARC, points out an analysis of The Empty Chair.

In Cauca there is a historically unresolved social, economic and cultural conflict, explains ex-defender of the People Carlos Negret, from Cauca family and knowledgeable about the region. Its origin has several causes. The first is a broken geography that makes it costly and difficult for the State to make a permanent presence with its security offer, but especially justice, education, health and infrastructure. The same condition that paradoxically favors the armed actors. “For dozens of years the State and the establishment have had a relationship with the peasant, Afro-descendant and indigenous communities mediated by mistrust. A mistrust that has ancestral roots, that distances and has been built under prejudices and preconceptions that are the essential conditions of stigmatization, ”he says. And to that is added the inequality and lack of opportunities in an essentially rural territory.

“The only way to transform these conditions is with transformations promoted by the entire State. With long-term policies and not with circumstantial projects; with sustainable and sustainable decisions, and not with fire extinguishers that sooner rather than later finish their load ”, assesses Negret. “I think that the implementation of the peace agreement has many of those elements.”