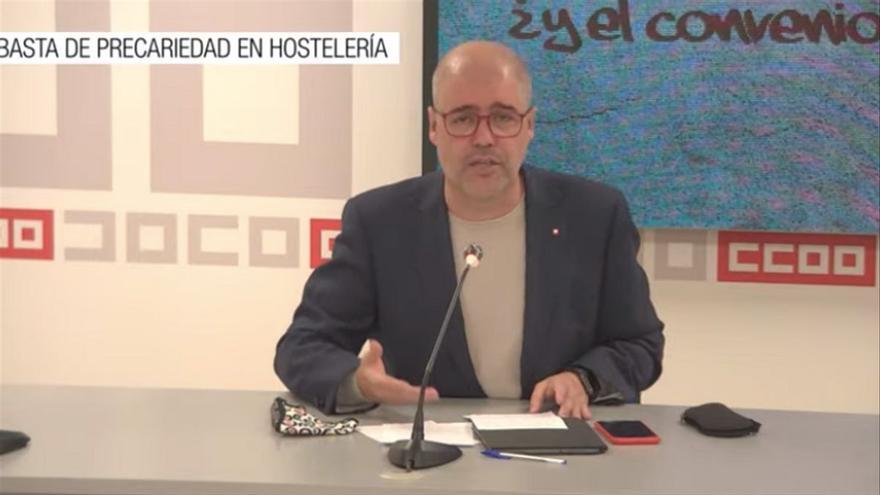 CCOO announces a Holy Week and a summer of strikes If the employer does not agree to unblock collective agreements of the sector of tourism, hospitality and restoration. CCOO has urged this Thursday to address a collective bargaining to improve the wages of workers in the sector and announces that if the employer does not open that possibility, mobilizations will be undertaken.

The secretary general of the CCOO, Unai Sordo, has defended this Thursday the labor reform as a fundamental instrument for the stabilization of employment and a clear opportunity to abandon the classic debate on the costs of dismissal, when the most important thing in his opinion is that they be imposed fixed or fixed discontinuous contracts in the sector and improve the conditions of the precariat. The big problem, according to Sordo, is that the average duration in the sector is 53 days, so the costs of severance pay are less important than addressing measures that limit temporary contracts. The CCOO general secretary has urged the left to be aware that the labor reform is the right instrument to face a new stage of fewer layoffs and eliminate the chronification of precariousness.

“We hope that the employers’ associations also bet on the unlocking and strengthening of collective bargaining. And if this is not the case, we will specify with the UGT and with the templates of the sector escalations of mobilizations at a global or territorial level, with Easter and summer as hot spots, demanding the unblocking of collective bargaining and measures against precariousness in Hospitality,” warns the union in its report ‘Enough of precariousness in hospitality’ presented this Thursday.

In a gradual situation of recovery of tourism in Spain, CCOO considers that “a ‘side B’ of Tourism and Hospitality is evident in the form of chronic and extreme job insecurity, for the sake of a model that has revealed its lack of sustainability in its fourfold aspect -economic, social, labor and environmental-“. The messages of ‘there are no waiters’ in a context of labor agreement frozen for 10 years, are one more trait for the union that the sector is marked by “misery wages and false partiality”. According Jose Maria Martinez, general secretary of the Federation of CCOO Services, has argued that it is necessary to reopen the negotiation of the collective agreement to fight against the improper use of partial hiring, payments in ‘B’ or the lengthening of working hours. In this sense, indefinite contracts and salary equality between men and women will be promoted. Sordo has recalled that the cleaning employees charge two euros for rooms that customers pay 400 euros per night in what is a “real scandal”. The agreement addressed in the Balearic Islands to demand elevating beds to facilitate the work of workers in their daily tasks has been welcomed by the union.

For CCOO “you need a change of model in Tourism and Hospitality. A model that must place in the foreground those who are the main asset of the sector (its professionals, mostly women), and that in no case can base its future on continuing to chronicle and perpetuate unsustainable precariousness”.

The report ensures that there has been an increase and chronification of the main indicators of precariousness, the bias -which has grown by more than 10 points, with a gender gap of 15%- and temporality -located at peaks close to or greater than 40%, even after adjusting temporary contracts during the pandemic-.

Between 2018 and 2020, a total of 36,111 adjustments in the Hospitality sector, more than 20% of the total regularizations, with a special incidence of regularizations in the form of increases in working hours, 58% of which were concentrated in Hospitality.