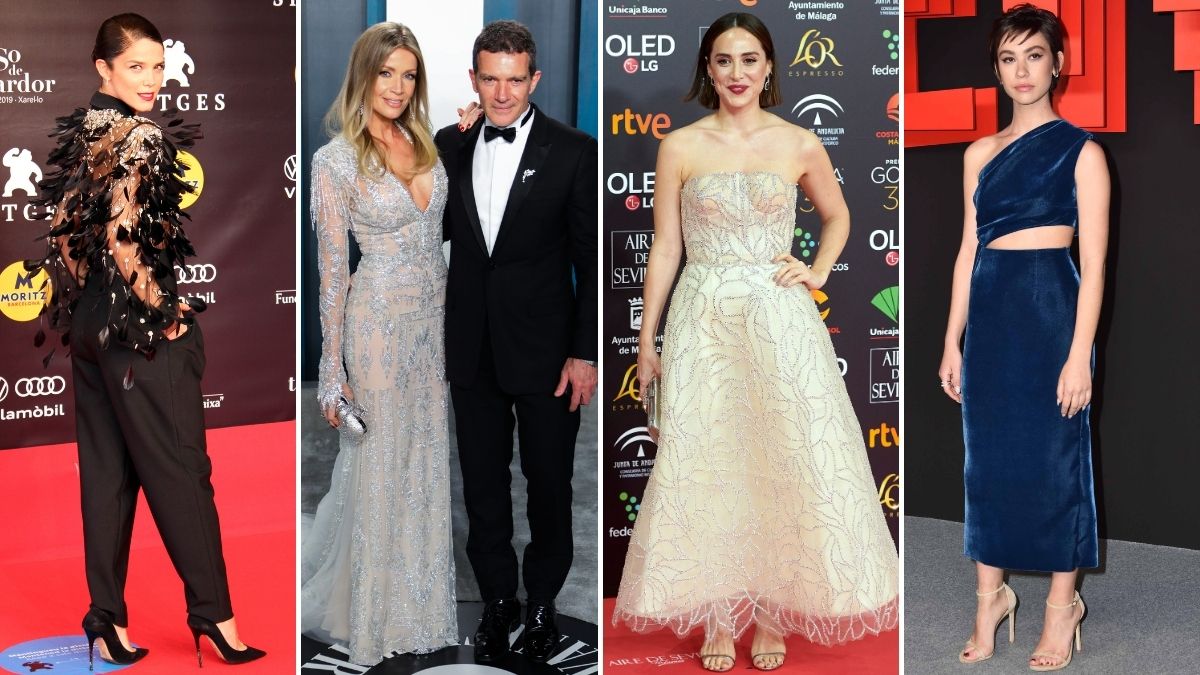 The announcement of the confinement caught Cristina Reyes returning from the Oscar ceremony. “I dressed Nicole Kimpel, Antonio Banderas’s wife. I went from being on the big red carpet to being tucked into my house. Luckily I was able to survive thanks to work in digital format with different brands ”, he explains. Now he is in Malaga, preparing for a strange ceremony of the Goya that will mix the physical presence with the video call. “This year we will only work with Nathalie Poza, who is nominated. It’s a shame the photocall. And it doesn’t make sense to dress to be at home, of course, ”says José Juan Rodríguez who, along with Paco Casado, dresses more than a dozen actresses with very different profiles, from Bárbara Lennie to Carmen Ruiz through Inma Cuesta or Aitana Sánchez Gijón. They have been doing it for almost 30 years. “We were almost the only ones. Then social networks changed everything, of course “, they comment.

All eyes are on the public image of certain celebrities. Their dress choices are subject to the tyranny of the I like it and they can be the beginning of lucrative deals with firms. However, for years, the work of dressing others has not been appreciated enough. “In the United States it has been important for years; here it has only recently become relevant. The artists were not aware that a good image can be a business that brings you advertising contracts “, says Cristina Reyes, who started in this sector in 2009 through her childhood friend, Enrique Iglesias:” I dressed Tamara Falcó to an event with a Marchesa dress. At that time the brand was in full swing, because it was long before the Harvey Weinstein scandal (the owner of Marchesa, Georgina Chapman, was his wife) and I, a newbie, sent them a powerpoint explaining everything so that they could send me a dress from New York ”. Cristina became the image manager for the Preyslers, the family that has been judged for their style for more than three decades. “I know Isabel doesn’t need advice, but I make her life much easier,” she says.

“30 years ago in Spain the concept of a stylist did not exist, or at least I was unaware of it. We didn’t even sign our editorials in the magazines, ”explains Blanca Unzueta, who, after an extensive career linked to the publishing world, is now also in charge of the image of another member of the clan: Tamara Falcó. “Our relationship came naturally. We knew each other through the magazine Hello! and in 2019 he called me. I started a new side in my career. The styling of celebrities in Spain it is somewhat more recent, but I think that over time it will pass as in other countries where some famous stylists have a name ”, he says.

“When we teach students we usually tell them that there is a lot of world beyond fashion magazines. There is television, series, actresses… and in the end those sectors are the real prescribers, ”says José Juan Rodríguez. Of course, in this business you have to put aside, by definition, the desire for notoriety. “It is true that before we were not named so much, but I honestly do not believe that we have to be named more than what is done. We should be in the background, because our job is to make the person we work with feel good. The problem comes when the stylist needs to stand out or stand out more than his client ”, comments Freddy Alonso, responsible for the image among many others, of Juana Acosta, Adriana Ugarte or Greta Fernández. “Yes, discretion is basic in this,” adds Cristina, “I can talk about it because I have been working with the same people for many years, but it is essential to stay out of it, because your job consists precisely in giving your client all the prominence ”. Discretion … and psychology, because patience and empathy are the key for the stylist-client relationship to extend over time. “They are not models; in our case, they are actresses, and there is a lot of insecurity, ”says José Juan. “The key is to make them feel good, to trust you. Only then can you experiment and get them out of their comfort zone ”, adds Freddy. “It’s that everyone can have a bad day and look terrible. The idea is that they fully trust your criteria. If you see them well, they know they are well, ”says Cristina Reyes.

They, in the shadows, set up a very profitable media and advertising machine, so every choice counts. “There are no schedules here, but the satisfaction of having your work recognized, makes up for it,” explains Blanca Unzueta. The problem, however, is that despite carrying the pressure of massive praise or criticism that comes with passing through any photograph or red carpet, the industry still does not help them. “There are firms that do not lend you clothes for an important person because their aesthetics ‘do not fit’, or because they do not have enough followers on Instagram. Not to mention the problem with sizes. Very famous people who don’t have to wear because they don’t fit into the canon of some big firms. Imagine the insecurity it creates for them ”, explains José Juan. And she adds: “Luckily, the time when everyone had to wear the sequined mermaid dress has passed. Now at least you can play to be different ”.