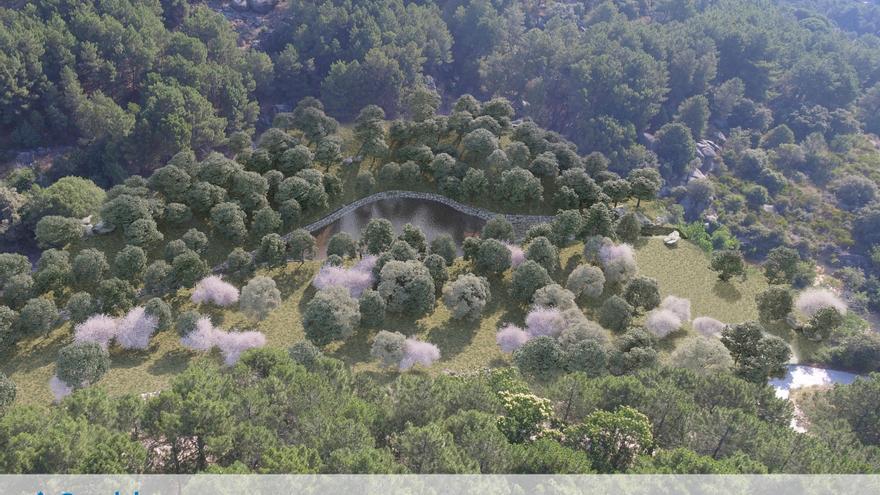 Frogs, toads and newts of a great variety of sizes and colors coexist in La Alberca, a pond located in an old dam in the Madrid town of Cenicientos that has become, after years of neglect, the largest amphibian colony in Europe.

Although Cenicientos is still emptier than usual due to the summer holidays, some residents of this town located in the extreme southwest of the Community of Madrid have come to know this renaturalized pond located on the outskirts of the municipality.

Access is only possible from the M-501 road by a very steep dirt road that finally ends in the enclosure, in the middle of the Arroyo de la Huerta de las Ánimas, at the foot of the Sierra de Gredos.

The old dam was conceived in the 1960s and construction began in 1969 to supply water to the municipalities in the area (Cenicientos, Cadalso de los Vidrios and Rozas de Puerto Real), although it was never used because leakage problems were detected.

In 2017, after years of disuse and facing the danger of collapse, the Community of Madrid decided to act on the site and finally discard its start-up, in collaboration with the City Council of Cenicientos.

“Besides all that, down the road passes and we could have had problems in the event of a large water leak“, explains Pablo Rodríguez Sardinero, manager of Canal de Isabel II, the Madrid public company in charge of water management at the foot of the pond.

The Community of Madrid has recently completed some works that began last October and that have lasted until mid-August, at a cost of 523,000 euros.

“We have proceeded to demolition of the dam wall, the sludge has been collected and the stream has been recovered to its natural state“, sums up the manager to Efe.

The depth of the water is barely one meter and A simple visit can be seen in its interior countless species of amphibians, mainly newts, frogs and toads of great variety of sizes and colors.

Several stone mounds have been placed in the middle of the pond to further attract the presence of this type of animal and, in addition, the mud removed from the bottom has been used to generate a vegetation cover on the edge.

Strolling through the vicinity, at the extreme left of the enclosure, you can see the the only preserved piece of the dam wall, which has been used to build a shelter for a colony of bats that had been detected in the area.

“It has been necessary to make a new access to the gallery of the wall on the left bank, because the original was on the right, which has been covered with earth and vegetation to integrate it into the area,” Vicente Muñoz, head of the Canal de Isabel II technical area, which has been in charge of supervising the works.

On the other hand, for In the reforestation of the area, seeds of native species have been used facilitated by the Madrid Institute for Rural, Agrarian and Food Research and Development (Imidra) and the National Center for Forest Genetic Resources, of the Ministry for Ecological Transition.

Further, the concrete of the dam has been crushed to obtain artificial gravel, a very useful granular construction material for the construction of cattle trails and roads, as can be seen in the vicinity.

There is no type of limitation for access to the area, but as soon as you arrive at the site you can clearly see a sign that prohibits bathing and any type of recreational activity.

The mayor of Cenicientos, Natalia Núñez, asks the people “raise awareness and take care of the place”, which will be “a benchmark in Europe in terms of amphibians”.

“It is a spectacular and unique site in flora and fauna throughout the Community of Madrid. It is necessary to bet on sustainable tourism“, he comments to Efe.

For now, both the Environmental Protection Service (Seprona) and the Ministry of the Environment, Housing and Agriculture will be in charge of monitoring and preserving the environment to prevent anyone from spoiling it.

Likewise, the Community of Madrid does not rule out carrying out similar actions in the near future in other areas of the region, such as the Navacerrada dam.