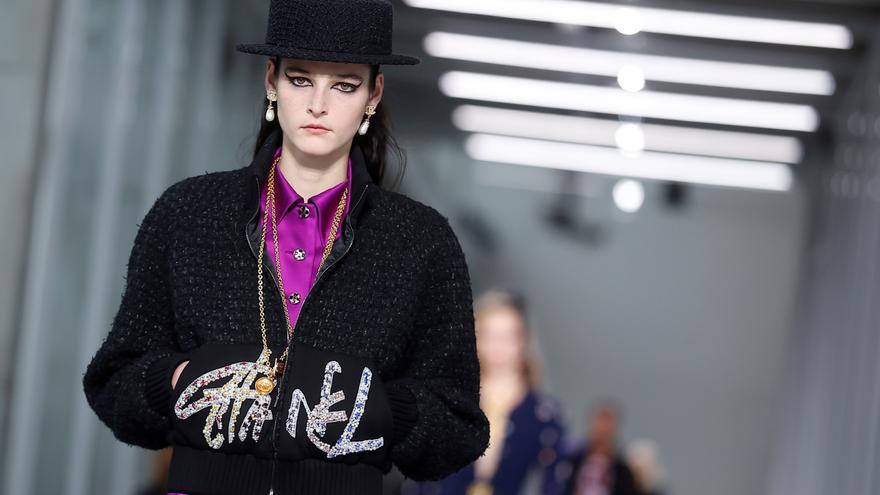 Chanel paid tribute to its artisans on Tuesday with a new edition of his collection ‘Métiers d’Art’, which exhibits the virtuosity of his talent and this time it was located in the 19M, a Parisian building that groups together some of the houses that work for the French ‘maison’.

That space of 25,500 square meters, designed by the architect Rudy Ricciotti, now houses eleven brands that collaborate with Chanel and other luxury brands, as well as the Eres lingerie and swimwear company, which also belongs to the group. This new headquarters, of modern, white and diaphanous structure, opened its doors to the public on Tuesday to offer a show in which the usual codes of the house were not lacking: from bicolor shoes to camellia, its emblematic flower.

The name of the firm was seen on jackets and belts, the double C interlaced It was also printed on dresses, and the feathers, hats or the elaborate decoration of pockets, coats or blouses, with abundant chains, was an ode to his own legacy. Sets in different shades of pink and gray, evening dresses with transparencies at the top and bottom, loose-fitting blouses with a wide neck or “total looks” in black and white, accompanied by tiny handbags. All of them completed a show with a minimalist presentation, in which they also opted for denim.

The film of the CHANEL 2021/22 Métiers d’art show is now playing on Twitter.#CHANELMetiersdart #CHANEL #CHANELShow https://t.co/7yEEvWsxEb

“All Chanel fashion shows are always a dream,” Spanish actress María Valverde told EFE, who witnessed it live along with guests such as the former model Inès de la Fressange or the choreographer and dancer Blanca Li.

The 19M is located in the 19th arrondissement of ParisA popular area known for its makeshift immigrant camps, it is home to, among others, the millinery Maison Michel, the embroiderer Lesage or the shoemaker Massaro. The chosen name evokes both the number of the neighborhood in which it is located and the date of birth of the founder, Gabrielle Chanel, on August 19, 1883, while the ‘M’, according to the ‘maison’ in December, it was chosen as a fashion or manufacturing initial.

Glimpses of the CHANEL 2021/22 Métiers d’art collection by Virginie Viard. Filmed at 𝘭𝘦19M, Chamblas documents the silhouettes in constant motion as models explore the new building dedicated to the fashion Métiers d’art.
Choreography and film by Dimitri Chamblas.#CHANEL pic.twitter.com/WFBV98cnpr

Chanel’s commitment to artisans is not new: Gabrielle relied on them from the beginning and, since then, the alliance has been strengthened to prevent the disappearance of some of these workshops due to lack of investment or successors.

Chanel, led by Virginie Viard after the death of Karl Lagerfeld in 2019, has bought around forty handicraft firms since 1985, with 6,600 total employees, and has been presenting ‘Métiers d’Art’ collections since 2002, outside the haute couture or ready-to-wear calendar. In previous editions they have been taken to places like Tokyo, New York, Monaco, London, Shanghai or Edinburgh.

This line combines craftsmanship and creativity and its presentation this Tuesday in the same building from which some of these experts work served to bring the guests closer to the heart of this meticulous process.

Also Read  Facebook: Police investigate a Moroccan publication that recruited people to cause an emergency landing in Spain | Spain

The parade was accompanied by the launch of a small animation film entrusted to the Remembers studio, which bases some of its images on the unique architecture of 19M and offers, from the artwork prism, the traditional Chanel codes.