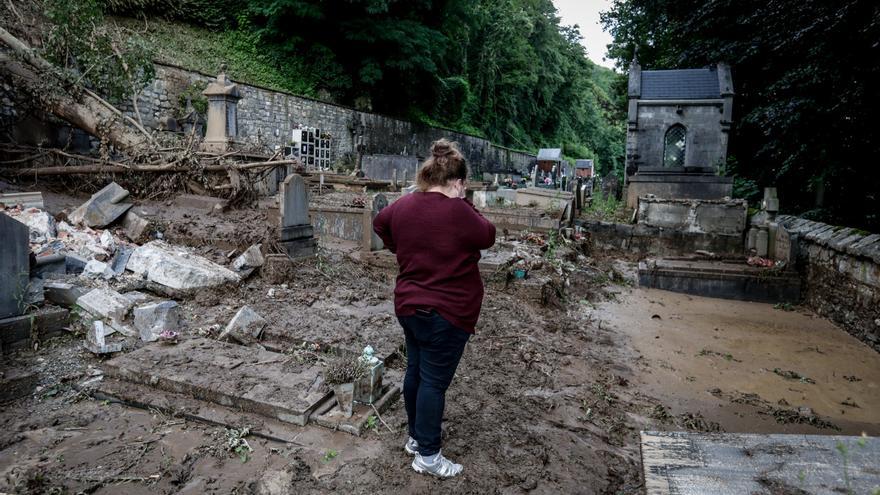 All humanity, absolutely all, has already suffered the effects of the climate crisis. There is not a single populated corner of the planet that has been spared the impact of global warming, thaw, sea level rise or the scourge of extreme weather events. This is confirmed by the sixth report of the Intergovernmental Group of Experts on Climate Change (IPCC) that, after years of scrupulous work, this Monday presents the first part of its ‘radiography’ of this global crisis.

This first report, focused on the physical and climatic part, has been developed over three years by 234 renowned scientists from 66 countries. The conclusions, in turn, have been reviewed by a hundred external scientific and governmental sources, which have added 51,387 comments to the final draft. In total, only this document is based on more than 15,000 academic references. It is not surprising, then, that the ‘condensed’ version of this work occupies more than forty pages.

The information that you will read below talks about the present and the future of the climate crisis. The data that is presented can be especially shocking for people who are especially sensitive or apprehensive or with anxiety problems. If this is your case, remember to address this information taking care of your mental health. If at any point during the reading you feel overwhelmed, for example, save the link and come back later. Doses the information. Share your feelings with friends and family. Seek support from environmental groups. Feeling fear, anguish and anger about the climate crisis is normal. “It is a set of feelings that serve as a preamble for the awakening of an ecological conscience,” he explains. Caroline Hickman, Psicoterapeuta of the Climate Psychology Alliance.

These are the main conclusions of the first installment of the report of the Intergovernmental Panel on Climate Change 2021, summarized by EL PERIÓDICO.

The first conclusion of the report is, perhaps, the strongest. “It is unequivocal that human activity has warmed the atmosphere, the ocean and the earth’s surface“, ditch the IPCC expert review. The X-ray of the impact of the climate crisis, then, begins by pointing out those responsible for this crisis.

Each of the last four decades has been warmer than any previous decade since 1850. In the last 20 years, the global surface temperature has been almost a degree higher than between 1850 and 1900. In total, it is estimated that the average temperature on the planet has increased by up to 1.2 degrees Celsius compared to the pre-industrial era.

Human influence is primarily responsible for the global retreat of glaciers, the declining arctic ice and from Greenland thaw of the last decades. The impact of human activity is also unequivocally related to the warming of the upper layer of the oceans, the water acidification and rising sea levels.

The Intergovernmental Panel on Climate Change also confirms that “Many of the observed changes in climate are unprecedented in thousands, if not hundreds of thousands of years“Hence, as they emphasize, we are facing an unprecedented crisis.

The global warming in the last 50 years has increased faster than any other time in the last 2,000 years. The temperatures recorded during this last decade exceed those estimated for the last warm period on the planet, 65,000 years ago.

In the last decade, annual extent of Arctic ice reached its lowest level since at least 1850. The ice levels recorded in late summer were lower than at any other time in the last 1,000 years. The retreat of glaciers, recorded around the world since the 1950s, is unprecedented in at least the last 2,000 years.

The sea ​​level has risen faster from 1,900 to now than during any previous century in at least the last 3,000 years. The average temperature of the ocean has increased more during the past century than since the end of the last glacial transition, about 11,000 years ago. Ocean acidification levels also set a precedent in the last 2 million years.

The report estimates that it is “practically certain” that warm extremes (including heat waves) have become more frequent and intense in most terrestrial regions since the 1950s. Some heat peaks observed during the last decade would have been “extremely unlikely without human influence on the climate system.”

Everything points to what human influence has increased the possibility of extreme events since the 1950s. This includes an increase in the frequency and intensity of heat waves and droughts on a global scale; an increase in the risk of fires on all inhabited continents; and an increase in rainfall and extreme floods on the planet.

The man-made climate crisis is also estimated to have contributed to the increase in agricultural and ecological droughts in some regions of the planet due to increased evapotranspiration from the earth. The areas most affected by this phenomenon will be the Mediterranean (including Spain), southern Africa, as well as parts of Australia, South America, and southwestern North America.

The report, far from being a catastrophic portrait of the planet, is a call to action. As explained by the scientist Francisco J. Doblas-Reyes in an interview with EL PERIÓDICO, “We are still on time, but we have to start now“” Just as it has become very clear that this crisis is the fault of human activity, we also know that human action is the only thing that can mitigate its impact, “he says.

Experts call “apply immediate, forceful and large-scale measures to reduce the emission of greenhouse gases. “Only in this way, they argue, will we be able to contain the advance of this global climate crisis. Especially considering that, even if drastic measures are implemented today to curb emissions, the planet would take between 20 and 30 years to regain its pulse.

The latest IPCC report, published in 2014, served to outline the roadmap for the 2016 Paris Agreement, the international pact for reducing greenhouse gas emissions. Only time will tell if this latest appeal from the Intergovernmental Panel on Climate Change (IPCC) will save the planet.