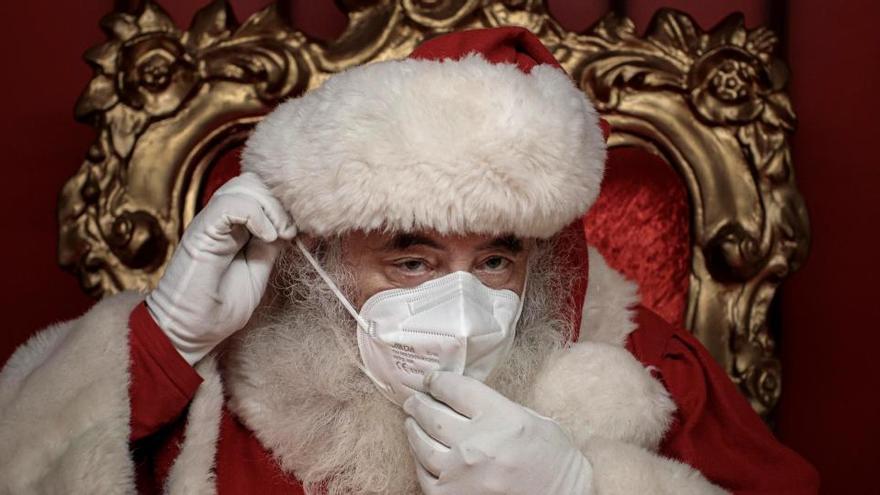 Europe celebrates Christmas Eve this Thursday divided between the hope of the imminent vaccine against Covid-19 and fear that festive events and social conditions contribute to increasing infections, despite the restrictions imposed by governments.

Limitations on attendance at dinners, curfews, restricted mobility… are the usual trend these days, which even come to the first Christmas in Greece when children will not be able to sing the traditional Christmas carols door to door (Kalanda).

One of the centers of interest is in the port of Dover, in the United Kingdom. Thousands of truckers are being held there waiting to go to France. The British Government promised that the ferries crossing the English Channel will continue to operate tomorrow, Christmas Day, and Saturday, to ease the chaos in the port.

Truckers, of different nationalities, are waiting on the motorway and on an airstrip near Dover waiting to be able to cross the continent, after France opened the border with the United Kingdom on Wednesday, closed on Sunday due to fears about the discovery of a new strain of the coronavirus in England.

Further, a team of 26 French firefighters has arrived in Dover with 10,000 coronavirus tests for carriers hoping to cross the English Channel in the next few hours, announced the French ambassador to the United Kingdom, Catherine Colonna.

Germany registered 32,195 new infections with Covid-19 In the last 24 hours, almost 1,800 more than a week ago, while the number of fatalities reached 802, which is 104 more than last Thursday. According to data from the Robert Koch Institute (RKI) of virology, updated last midnight, the number of positives since the first contagion was announced in the country at the end of January amounts to 1,587,115, with 28,770 deaths.

On Wednesday of last week they came into force new more restrictive measures, which will last until January 10. They include the closure of non-essential shops and schools and are added to the cessation of activity in force since the beginning of November in the leisure, sports, culture and gastronomy sectors. The limit of five people from two addresses in private meetings is maintained – which does not include those under 14 years of age in the calculation

From this Thursday until Saturday, on the occasion of the Christmas festivities, the meetings may be extended to four more people, also from other homes, although not in all federal states.

Italy begins its days of confinement to avoid crowds of people during Christmas before a contagion curve that does not drop what was expected and with about 15,000 daily cases. The Government decreed that from today until December 27, and subsequently from January 31 to 6, all of Italy, and not just some regions, will be in the red zone and it will not be possible to leave home without a justified reason for work, to buy or for an emergency and all stores have been closed except pharmacies and supermarkets.

Mobility between municipalities and mass family gatherings are not allowed either, but on these dates an exception has been introduced to facilitate visits to relatives, only two more people from the family nucleus (not counting children under 14 years of age). For this reason, checkpoints have been intensified both in city centers and on exit roads. Those traveling will have to bring a statement proving the reasons for their mobility.

Italy reached this Wednesday the 70,000 deaths from coronavirus after adding another 553 deaths. These figures make it the fifth country with the most deaths from the virus in the world, after the United States, Brazil, India and Mexico, according to the US Johns Hopkins University.

In France, President Emmanuel Macron ends the one-week quarantine imposed on Thursday after testing positive for covid-19 and after all symptoms of the disease disappeared, the Elysee said.

The country, which close to 62,000 dead and the 2.5 million infections, it is under a strict curfew from 8:00 p.m. to 6:00 p.m., which, however, will not apply on Christmas Eve, although it will apply on New Year’s Eve. Even so, the government insists that family gatherings bring together a maximum of six adults, not counting minors.

Portugal begins today a new state of emergency of 15 days, until January 7, although until Saturday there will be a reduction of the restrictions so that relatives can see each other on Christmas Eve and Christmas. In this way, the curfew will only apply between December 24 and 26 from 2 to 5 in the morning and it will be possible to circulate between regions to visit relatives.

Further, On the nights of December 24 and 25, the restaurants will be open until one in the morning. The restrictive measures will be implemented again from Sunday

After several days of recess, yesterday, the number of infections and deaths rose again, with 4,602 infections and 89 deaths. Portugal has accumulated 383,258 positives since March.

Russia added 29,935 COVID-19 infections on Thursday, a new daily maximum since the outbreak of the pandemic, and 635 deaths, reported the country’s health authorities. Since the start of the health emergency, 2,963,688 cases of coronavirus have been registered. With the deaths in the last 24 hours, the total number of deaths from covid-19 in Russia amounts to 53,096, according to official statistics.

Russia so far has not tightened sanitary restrictions and is committed to vaccination campaign that started in the country this month. The mayor of Moscow, Sergei Sobianin, has warned that the city will be able to return to a life without restrictions – teleworking, confinement of the elderly, limited hours for restaurants, cafes and bars, and smaller capacity in cinemas, theaters and concert halls- only after mass vaccination of the population.

In Belgium, due to the risk, the curfew is still in force and bars and restaurants are closed. The regulations impose that only one person from outside the home can be invited to dinner, or two for those who live alone. There is the possibility of receiving up to four guests to dine in the garden, provided that it has autonomous access to the street. And only one of the strangers will be able to use the bathroom.

Sales of braziers and stoves They have shot up on the advent dates and firefighters have asked those who are going to celebrate Christmas Eve with fire in the garden to take extreme precautions.