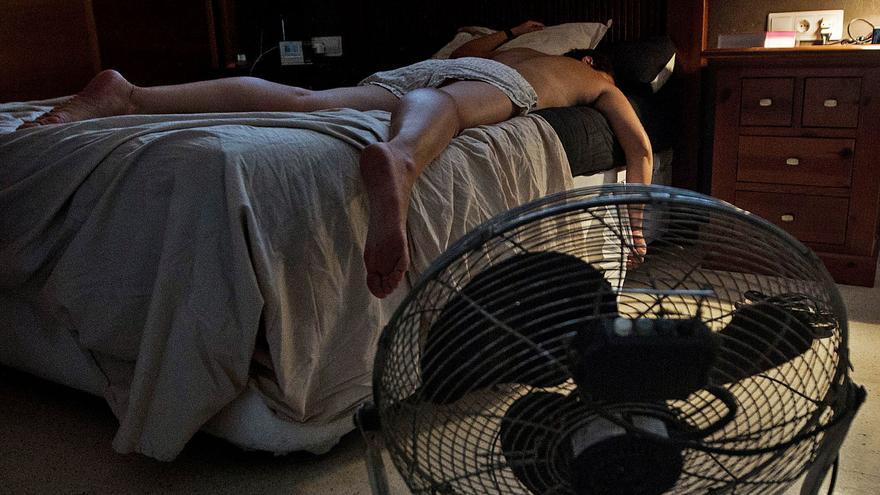 Increasing the temperature of the Mediterranean Sea (already close to 28 degrees on the coast of the province) has had a devastating effect on the increase in summer heat discomfort in the province of Alicante, since between June 1 and August 18, last Wednesday, the Laboratory of Climatology of the University has registered a total of 71 tropical nights – the temperature does not drop below 22 degrees – of which five were equatorial (25 degrees or more than minimum), twice as much as in the summer of 2020, and completed with a high degree of humidity. The direct cause is the sea temperature and according to Jorge OlcinaIt is already a fact that in summer in cities like Alicante the temperature does not drop below 20 degrees on any night in the summer, especially in the urban center, where the buildings also help to keep warm. That is, in many cities every night is tropical in summer. The last succession followed by equatorial nights, five in August, already occurred in the summer of 2015.

A report from the Laboratory of Climatology on the effects that climate change causes on the evolution of temperatures in the province warns that, in the last ten years, the increase and combination of heat and humidity have caused the thermal sensation during the summer ( embarrassment), especially at night, becomes higher than in the Guadalquivir Valley, which is considered the most torrid area in Spain.

In the province, it is perfectly appreciated in the urban centers of Torrevieja, Elche, Alicante, Benidorm and Dénia, as he points out Jorge Olcina, author of the study together with Samuel Biener. The so-called tropical nights (the temperature does not drop below 22 degrees) have tripled since 1980 and as an anecdote it is worth noting that the neighborhood of La Florida, in the city of Alicante, happens to be the oven of the municipality, according to the report’s calculations.

During the first fortnight of August, nighttime values ​​have been very high throughout the province, culminating in the heat wave last weekend. The minimum temperatures have not dropped below 25º. When at night it does not drop below 25º, it is popularly called equatorial night.

During the last two weeks the relative humidity of the air has experienced multiple fluctuations. Every night, the thermal sensation has been around 30º, even in some cases more, according to the «heat Index», which is the one usually used by the State Meteorological Agency. “Without air conditioning it is very difficult to fall asleep with such high temperature and humidity values,” explains Olcina.

This situation does not occur in other areas of Spain, where torrid nights tend to be rather specific or do not last more than three or four days, almost always coinciding with heat waves, and one of the best examples is the Guadalquivir valley.

Due to the warming of the Mediterranean, the effect of the urban heat island and climate change (although in the case of the Mediterranean coast we still do not know the weight it has with respect to these situations), there is a very important increase in the last decades of the tropical nights (minimum of 22o or more), and especially, of torrid nights (25o or more), according to the Climatology report.

Until 1980, torrid nights in the Mediterranean and on the coast were exceptional, but in recent years they are becoming more frequent on the Mediterranean coast. In our province, it is perfectly appreciated in the urban centers of Torrevieja, Elche, Alicante, Benidorm and Dénia.

The Mediterranean will rise to 28ºC in early September

The warming of the sea, which has become the main negative consequence of the climatic field in the province, because this thermal increase is responsible for the violence of the cold drop and, for example, tropical and equatorial nights. Olcina, alert for “We will still see this summer how the temperature will reach 28 degrees in September”. For now, the Mediterranean is already like the Caribbean and the water is very hot, which is also a factor to feed the cold drop of autumn, when torrential rains occur. Since 1980 the average temperature has increased by 0.8ºC and this warming is responsible for the tropical nights.