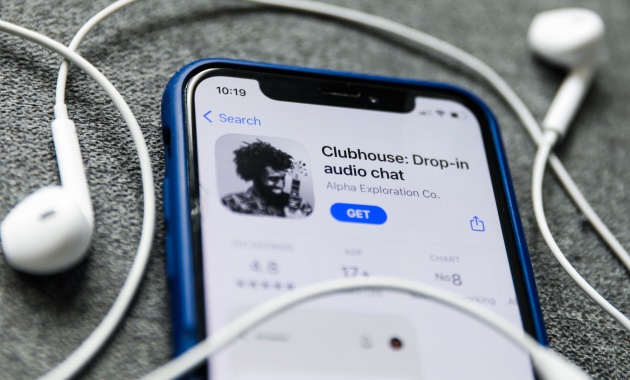 Clubhouse, the social network that only allows communication with audio, is dripping into Spain. At the moment, it is only available for iPhone and requires an invitation to register, although these are growing exponentially. Each user who registers receives two invitations, so that a new member can invite two people, who in turn will invite four, who will invite eight … And in that spiral of growth, they invited me.

Unlike other social networks, in Clubhouse there is no image, no video, no text or emojis. Single voice. In addition to holding private conversations with one or more contacts of the user, the most striking part of this application, which was born last April but has just started to become popular in Spain, are its rooms: this is how group conversations are called, access chats free in which the moderators give voice to the users who ask to speak, for which they only have to press a button (an icon of raising their hands). There are rooms of everything: poetry, marketing, humor, to play, etc. And all content is ephemeral: no conversation is saved or logged.

The application, for the moment, is quite intuitive: it has a menu to search for rooms and users; another that could be the counterpart to the Twitter timeline, which shows the rooms available at that moment (ordered according to your preferences); another with rooms scheduled for the next few hours and a notification section. In my first 24 hours after receiving the invitation, I entered a dozen rooms, organized my own, spoke twice and learned a lot about this application. Here are some of the lessons from my first day talking to strangers at the Clubhouse:

At the moment, Clubhouse is not an open application, so after downloading it and selecting your username, you have two options: or wait until you have to enter – the app page it only indicates that they are still “opening” and it is unknown when it will open to the public – or that a friend who is already inside will sneak you in. So, to enter without waiting, you need a friend or acquaintance who is already inside to invite you. When you get in, it’s still like a disco. First, you locate your group of friends: as soon as you register, this social network shows you your contacts who are already in the Clubhouse so that you can follow them or start a conversation with them. Afterwards, it’s time to talk to strangers.

2. Your interests are of little use, at least for now

After entering the Clubhouse and selecting the contacts to follow, the application displays a list of interests to select what your hobbies are (music, television, comics, video games …), your religion (Christian, Buddhist, Taoist, atheist …) , what languages ​​do you speak, what do you identify with (black, Latin, genZ, baby boomer…), etc. However, it is not much use: in the morning, as there is not a too large volume of users, both the “explore” menu and the rooms that will take place soon do not only show talks related to your interests, but what there is at that moment. After marking that I spoke Spanish and that I was interested in television, video games, comedy and manga, the first rooms that appeared on the list – and the first ones I entered, although only to listen – were Business chat – gurus no thanks (about marketing and business) and Welcome to clubhouse Malasya (about… I don’t know, they were speaking in Malay). Well into the afternoon and at night, although the rooms still did not coincide 100% with my preferences, there was much more variety.

3. To organize a room, it is recommended not to be alone (and be patient)

Since the first rooms that appeared in my list did not interest me too much and I wanted to test what it was like to chat and interact with the rest of the users, I decided to set up my own, Half an hour of bad jokes. The title was very clear: I would spend half an hour telling terrible jokes and giving the floor to anyone who dared to tell one. In my first room, I learned two things that more users later confirmed: the first, that although the application and the environment invite you to participate, people find it a bit difficult to cheer up.

Fernando of Cordoba Y David Belzunce, experts in marketing and social networks who have been testing formats in the application for several weeks, explained to me (through a private Clubhouse room) that they usually prepare the first ten minutes of chatting in their rooms so as not to generate uncomfortable silences and pave the way. ground until the rest of the users are encouraged to speak. The second thing I learned is that, to avoid those silences, it is also recommended that the weight of the room be carried between two people. The bad joke room turned out to be a lot of fun, but the first few minutes were very strange: it is really awkward to tell a joke and the only response is total silence.

4. A Galician people had a diplomatic conflict with Israel

It seems like a weird lesson to learn at the Clubhouse, but it’s just one of the things I learned in the first room not hosted by me that I dared to raise my hand to participate: Tell us something we don’t know, one of the formats that Fernando de Cordoba and David Belzunce have been testing for several days and in which listeners participate by telling curious facts or facts that the rest probably do not know. The first brave woman who dared to speak told the story of the diplomatic conflict between Oleiros (A Coruña) and the government of Ariel Sharon in 2004. Yo, why is pineapple sugus blue.

5. You can cook while you are in the Clubhouse. And walk, or do the shopping …

Unlike other social networks that are based on text, images or video, in Clubhouse there is only audio. Once you enter a room, you don’t have to look at your mobile unless you want to raise your hand to participate, which forces you to press a button. So you can do the same thing you would do while listening to a podcast: play sports, take care of housework, answer emails, check Twitter … I heard Tell us something we don’t know while preparing dinner.

6. The network is about to civilize

While I was making dinner listening Tell us something you don’t know, There came a time when it was impossible for me to both speak and listen: I had to turn on the kitchen extractor hood. There, a question arose: after telling why Pineapple Sugus is blue, I still had permission to speak. Is it rude to leave the room without saying goodbye or, on the contrary, is it rude to interrupt the conversation just to say that you are leaving? De Córdoba and Belzunce told me that “as in Twitter there are more or less clear rules of etiquette, such as capital letters imply shouting and should be avoided, at Clubhouse there is still no clear etiquette guide.” Each room is its own world: there are some in which users take the floor and begin to speak without introducing themselves or saying hello, others who only say hello, others who tell their entire curriculum vitae before starting to speak …

7. There is a free bar of formats without a clear winner

The variety of rooms is very high. On my first day I saw open poetry mikes, humorous talks to tell anecdotes or share embarrassing moments, dozens of talks about marketing, entrepreneurship, about the operation of the Clubhouse or how to be a Clubhouse influencer … From Córdoba and Belzunce, after several weeks testing their own formats and those of others, they consider that, in their opinion, one of the possibilities with the most potential are games and interactive formats: “They have many possibilities, a written chat is not as warm as a chat in a Clubhouse room”, consider De Córdoba. Last weekend he organized a Detective game, with the same mechanics than the one that Roberto Sánchez captains in Cadena SER. And Sánchez himself ended up playing. “It was like making a room talking about crimes and seeing Agatha Christie come in,” says De Córdoba. This weekend, De Córdoba will be with Manuel Bartual, Modesto García and Nikki García, among others, organizing a role-playing game on the platform.

8. The environment is healthier than in other social networks

On my first day at the Clubhouse I only heard friendly comments, people laughing and conversations in an informal, friendly and relaxed tone. One of the factors that promote this climate is that conversations are not recorded. If it weren’t for that, I don’t think more than a dozen people, including well-known journalists and marketers, would tell terrible jokes live during my bad joke room. Fernando de Córdoba and David Belzunce also point in another direction: almost all users use their photo and real name on this network, where you can only talk. “Without a pseudonym and an avatar to hide in, and having to criticize loudly, it is more difficult for insults to appear, for example,” they consider.

9. All this could change from one day to the next

The application is in beta version and is still undergoing changes. For example, in one of the groups on marketing and Clubhouse that I entered they were talking about “clubs”, communities of users with the same interest and from which to publish rooms. However, they themselves warned that, for the moment, the option of creating clubs had been deactivated. As well have incorporated new features in recent days as direct links to the rooms (although you must be registered to access them) or search for users within the same room. After trying this social network, the next day I couldn’t even find it on my phone: they had changed the logo.