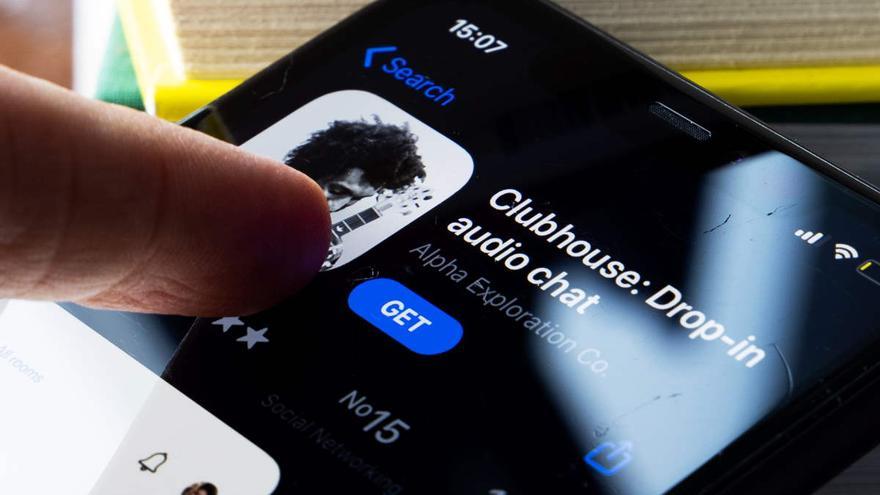 Be an active user, charge a maximum of $ 100 if you die, give your content, do not give false information … These are conditions that, although most do not know it, the users of the latest fashionable social network are accepting, Clubhouse.

The voice social network has become very popular in recent months, with two million downloads, recently arrived in Spain and currently only available for iOS. With its format, it has even attracted the attention of other social networks that have imitated it, such as Twitter, with its Spaces.

Between 90 and 99 percent of users, according to ProPrivacy.com, do not read the terms of use or the privacy policies Of the tools they use, and with the arrival of new social networks, such as the Clubhouse, controversy and confusion often arise among the community.

The fashion app has already had to review and update its privacy policy and conditions of service due to the doubts generated by the way and the place in which the data and conversations of the users were stored, which could be accessed by the government of China.

Beyond the location of the servers, from the digital development consultancy Spanish Syntonize recall that it is important to know the legal implications that one accepts each time an app is downloaded.

“The focus is usually on data protection, but the mere fact of having to go to court in California or Miami because you have agreed to litigate there, can already represent a huge expense for a person or a company just in accommodation and transportation “, he warns Juan Quintanilla, CEO of Syntonize.

From the consulting firm they review some of the legal curiosities accepted by users who chat in Clubhouse, owned by Alpha Exploration Co.

The first one is that people accept new Clubhouse conditions without being notified. Since last November 2, when the conditions of service were updated, users consent to the temporary recording of their audios at least for the duration of the conversation.

This update is only communicated on the web and users accept it for the mere fact of continuing to use the service, even if they are not aware of the changes. The same happens with a possible change in rates, which the app can communicate on the web or to the user’s email with 15 days in advance. If you continue using the app, the new rate will be accepted.

Only of legal age

Clubhouse establishes certain conditions to allow its use. The first is that it can only be used by people over 18 years, above the age required by other platforms (in Spain it is 14 years old on Facebook, Instagram and YouTube, for example).

The second is that people must use the social network actively. This reserves the right to paralyze or suspend the service without having to notify the subscriber or cancel the accounts of those users who are inactive for an extended period of time, without specifying how much.

Clubhouse also does not allow people to use the platform to give false information or run contests. Users cannot use the app to send viruses, spam, chain letters, pyramid business proposals, surveys, contests or lotteries, among other things.

Nor may they use language that is harmful, threatening, abusive, harassing, criminal, excessively violent, defamatory, vulgar, obscene, pornographic, libelous, invasive of another person’s privacy, or that evokes racial or ethnic hatred. And to avoid bulos and ‘fake news’, you cannot give false information. These conditions are common in today’s social networks.

Clubhouse also has other conditions relating to secrets. The platform requires written consent from all members of the conversation to record part of it and information cannot be shared outside of the Clubhouse when the speaker has explicitly said that that conversation is ‘off the record’.

In the Community Use Guide, The application indicates that the information obtained in Clubhouse cannot be transcribed, recorded, reproduced or shared without the corresponding permission.

However, Clubhouse can freely use your content. By uploading any content to Clubhouse the user grants the company and affiliated companies a worldwide license, royalty-free, transferable, sublicensable, perpetual and irrevocable to make any use of the content uploaded to the network without having to pay for it and in perpetuity for the promotion, advertising or marketing of the service in any current form, medium or technology or that will be developed in the future.

Despite this, the company asks users to ensure the protection of the intellectual property.

One hundred dollars per death

In another of the most curious sections of the Clubhouse policies, the user exonerates the company and its affiliates from damages, expenses, actions of any kind and injuries, including death, derived from the use of the service or for the violation of the service conditions.

The platform warns that, in case of compensation, will not pay more than what the user has paid for the last six months of service or, at most, 100 dollars.

Clubhouse users authorize the company to analyze their activity, something common also on social networks. The company reserves the right to collect information on how a user uses the service, the types of conversations you participate in, the content you share, the features you use, the actions you take, the people or accounts you interact with, and the time, frequency and duration of their use.

Finally, another important aspect is that Clubhouse, born in U.S, refer any litigation associated with the terms of service and the privacy conditions to the arbitration of the American Arbitration Association and to the courts of San Francisco (United States) for any other legal claim.

The owning company agrees to agree to an arbitration court that suits both parties since, in the case of claims less than $ 10,000, the visit is by phone or in person, as the user prefers.

However, the claim and its possible repair (including monetary compensation, by court order and declaration) can only be individual.

As with the rest of the most used applications, ignore the ‘small letter’ of the terms of use does not allow non-compliance, but in general the rules in all are similar. Therefore from Syntonize it is recommended to make sensible use of any application and it is remembered that the information that is shared in them usually becomes the property of the manufacturer.