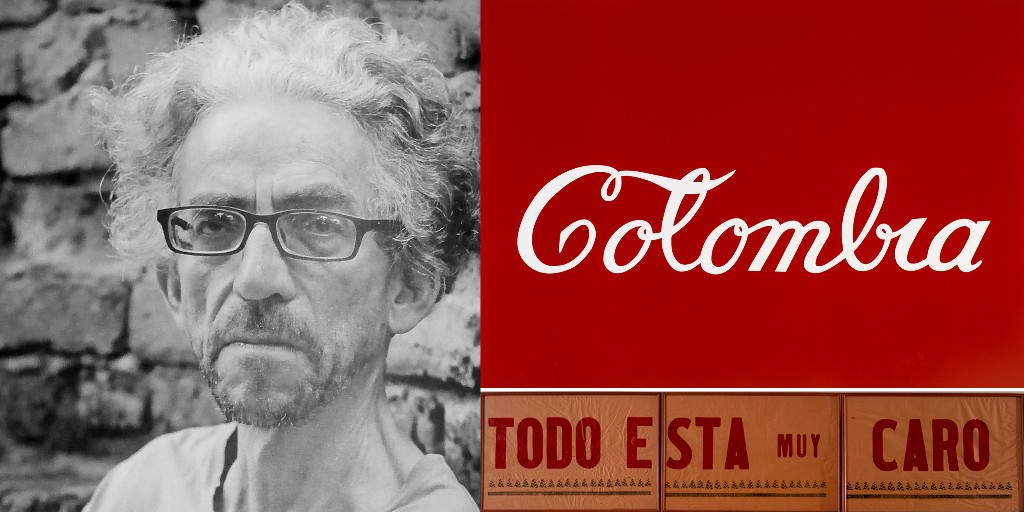 Antonio Caro, who died this Monday, was one of the critical artists of the Colombian scene in the 1970s and 1980s. His work feeds on the political tradition that emerged in Bogota art in the late 1940s. At that time, a popular revolt known as El Bogotazo, on April 9, 1948, caused a turn in the modern tradition: now the artists could not remain silent before the bullets and the dead in the streets, nor before the repressive order. Unlike the rest of Latin America, in Colombia there were no great dictatorships, but there was an underground effort to maintain the the status quo regardless of the cost. The consequences are intensely felt in the present: guerrillas, paramilitaries and drug trafficking, as well as the persistence of the so-called “art of violence”, perhaps the most enduring cultural tradition of the Republic.

Antonio Caro, unlike previous modern artists, produced a typographic, installation and conceptual work that did not use the direct representation of events to give “testimony” or make a “document”; Nor did he want to produce “unique” works to decorate collectors’ houses (which was the case with certain paintings of violence such as Alejandro Obregón’s), nor was he interested in traditional media such as painting. Caro preferred to point out, with simple puns, with the juxtaposition of symbols, with ambiguity, humor and sarcasm (inherited from another conceptual artist, his teacher Bernardo Salcedo), the generators of the country’s violence: the possession of the land, inequality in the countryside, political repression, US penetration and the “Indian problem.”

For this, Caro produced his works through quasi-industrial methods such as typographic poster, lithography or printing. offset, which offered him larger runs than the usual engraving methods such as etching, preferred by other political artists such as Luis Ángel Rengifo. This seemed to align with a certain spirit that hovered over the political art of the continent and that we see in the artists Juan Carlos Romero from Buenos Aires, Clemente Padín from Montevideo or Adolfo Bernal from Medellín. These production methods struggled with the prevailing idea of ​​uniqueness in the art market and were committed to the free and free circulation of the artistic object, especially the critical object. The artist Miguel Ángel Rojas, a friend of Caro and a fellow student at the National University of Colombia, affirms that “Antonio’s great contribution was to base his work on thought rather than on trade: he neatly continued the attitude of the artist Bernardo Salcedo who taught us to think, thus establishing an impeccable line in conceptual art ”. For his part, the artist Álvaro Barrios reminds us that, at the headquarters of the Museum of Modern Art at the National University, Caro “closely followed the development of Colombian art at that time, which moved from modern art to the art of ideas, when the foundations of conceptualism were established in our country. There he was able to see closely the work of pioneers such as Feliza Bursztyn, Beatriz González and also my work ”.

A Caro timeline shouldn’t miss at least three projects: (i) Colombia (1976), in which he wrote the name of the country with Coca Cola letters (in drawing, lithography, screen printing and enamel), criticizing consumerism and the growing US penetration in Colombian society. In this regard, the historian Álvaro Medina tells us: “I was living in Manhattan when Caro made his Colombia Coca Cola and he dreamed of seeing it hanging, embroidered on a five-by-two-meter banner, on the facade of some building on 57th Street or Madison Avenue, because it was much more powerful than many of the works exhibited there. Caro knew how to question the relationship of dependency that, by consent, we have with the United States, a dependency that drug trafficking has ended up strengthening in the worst way. The criminals here depend on the criminals there and our governments also depend on the government there. Vicious circle. Caro was right ”.

For its part, (ii) in the series Everything is very expensive, the artist plays with his surname and with a citizen economic claim. Finally, (iii) Caro recreated the signature of the indigenous leader Manuel Quintín Lame (1880-1967), unjustly imprisoned and tortured. The signature of Quintín Lame used the characteristic initiation of the signatures of the conquerors syncretized with the indigenous glyphs. Caro appropriated this signature to, as the Uruguayan critic Luis Camnitzer says, “to revitalize the power of Quintín Lame’s lyrics and force the awareness that Colombia still has stories that have not ended.”

Although the 1970s are the time of vogue among historians and the art market, and it is the period intensely revalued during the last decade, it is not the only time that Caro worked. The Colombian critic Carolina Ponce de León reminds us that “although Caro’s contribution to the conceptual art of the 70s is often highlighted, for me, her vision went beyond that legacy with her creativity workshops that anticipated artistic practices based on the collaboration and in the exchange of knowledge. I worked with him for the first time at the exhibition Before America which I cured together with Gerardo Mosquera and Rachel Weiss in 1992, for which Caro prepared an ancient recipe for sweet papayuela in a large clay pot for 500 guests, a delicacy that has withstood the multiple colonial forces of Colombian history. He designed a flyer with the recipe and distributed it among all, fulfilling a kind of historical justice, affirmed with an activist, generous and poetic gesture ”.

Despite the numerous texts that historians and curators have dedicated to Caro’s work, many passages from her personal life remain a mystery to the general public. And this mystery contrasts with the visibility and significance that the artist has gained in Latin American art in the last decade. This seemingly contradictory position (that of an artist whom, personally, we know so little about, but who at the same time is so visible), coupled with his deliberately disheveled appearance and his self-confidence in confronting contradictions, has helped to fuel all sorts of legends. Ponce de León recalls that, when he met Caro in 1980, “he already had a mythical reputation for a public slap he had given to an art critic and for the sculpture of a head of salt that he made of President Carlos Lleras and that melted in an urn filled with water during a National Salon of Artists. The rumor was that he had to be feared ”.

In the Colombian scene he is also remembered as a ubiquitous person and, perhaps, in this perception (which is not anecdotal) resided his great vital performance. Juan David Correa, literary director of Planeta Colombia, evokes how easy it was to meet Caro on any street corner, even several times in the same day; curator María Wills remembers him as “a traveler, far from the ideal of the ‘successful’ artist of the 21st century”; and Luis Camnitzer, in his article Antonio Caro: visual guerrilla (1995), extrapolated the subversive character of his work to his daily performance when he stated –in a text that could be the artist’s epitaph–: “I can’t swear it, but I think he lives with a backpack stuck to his back. I believe that it does not ‘own’ things, that it has the power of ubiquity and that it does not age (over the years I have seen it in different cities in Colombia, with no apparent reason to be there, no visible changes). Disregard for his own image made him a kind of icon that gives us a clue to his work. His art lacks the fetishism typical of gallery works, vanity was expelled from his world and in that world, Caro is just another work ”.

Halim Badawi He is an art critic and curator.