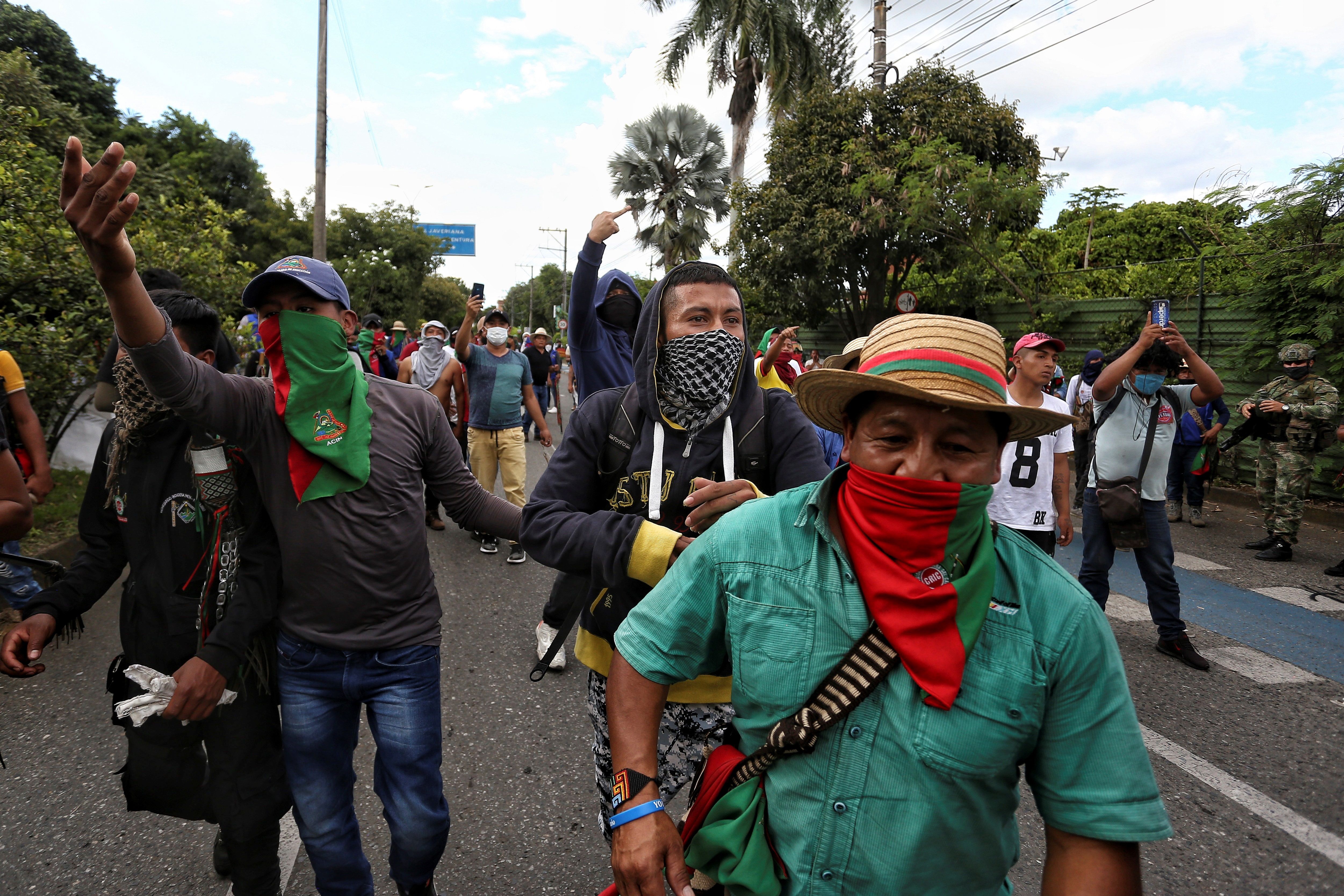 Groups of armed civilians fired this Sunday at the protesters who were part of the minga indigenous people who have gathered in the city of Cali, the scene of violent confrontations in the framework of the protests against the government of Iván Duque, according to the indigenous authorities and can be seen in videos that have flooded social networks. In the midst of blockades that threaten to cause shortage problems, the tension in Colombia’s third city has escalated without brake in the 12 days that have elapsed since the outbreak of social mobilization that has crashed with police repression, in incidents that they have caused at least 27 deaths throughout the country.

The “rich families of Cali in union with the police (…) fired indiscriminately” against the indigenous guard and the community, the congressman denounced. Feliciano valencia, one of the most recognized indigenous leaders in the country and a senator for the Indigenous and Social Alternative Movement (MAIS). The armed attack in the Cañas Gordas sector, on the road that connects Cali with Jamundí, in the department of Valle del Cauca, has left nine wounded by firearms, reported the Association of Indigenous Councils of Northern Cauca (ACIN). “The harassment of armed civilian individuals persists, with the complicit accompaniment of the army, the police and the [Escuadrón Móvil Antidisturbios] Esmad, ”the organization said in a statement.

With more than two million inhabitants, Cali is the great city in southwestern Colombia, near the Pacific coast, that functions as a corridor for drug trafficking, and has been facing security problems for decades, from gangs to organized armed groups. At the end of the last century, it suffered the attacks of the large drug cartels, as well as the actions of the guerrillas, in particular mass kidnappings. The city is a neighbor of territories still in dispute in the department of Cauca, and the authorities have even noticed the incipient presence of emissaries of Mexican cartels. The mobilizations, confrontations and disturbances derived from the protests against the Government, and the violent police repression, are in Cali with a powder keg to which is added the indigenous minga that has arrived to join the national strike.

“Mr. President Iván Duque, there is an indigenous protest and a citizen strike. It is a national political problem that takes place in Cali. This political problem needs your visit and that of the entire national conglomerate to resolve it through dialogue ”, declared the mayor of the city, Jorge Iván Ospina. “Here in our department, the mayors of the municipalities, the Archdiocese of Cali and the social leaders are working at the tables for humanitarian corridors, but the indigenous issue is only the spring of the national government,” said the governor of the Valle del Cauca, Clara Luz Roldán. They did not get the desired response.

Without detailing the incident, or referring to the attackers, President Duque reacted with a statement to the country. The president asked the leaders of the Cauca Regional Indigenous Council (CRIC) order the protesters to return to their shelters and suspend the roadblocks they have made in Cali and the road to Jamundí, “to avoid unnecessary confrontations.” He also announced that he was sending his Minister of the Interior, Daniel Palacios.

Colombia as a whole, and particularly the citizens of Cali, reject the blockades that affect the supply and distribution of medicines. To the members of the @CRIC_Cauca I call on you: return to your shelters and avoid violent confrontations with citizens. pic.twitter.com/oFv3I7RmIl

“The images that we are seeing in the city of Cali deserve, on the part of all of us, to act with all prudence,” declared the president, who has been demanded by various authorities to move urgently to that region to address the difficult social situation and of public order. “I have made the decision, out of prudence, not to have a presence at this time that distracts the work of the public force, which should be deployed throughout the city, but I am constantly monitoring,” he declared. His words generated a barrage of criticism, both from the political opposition and from his own party, the Democratic Center.