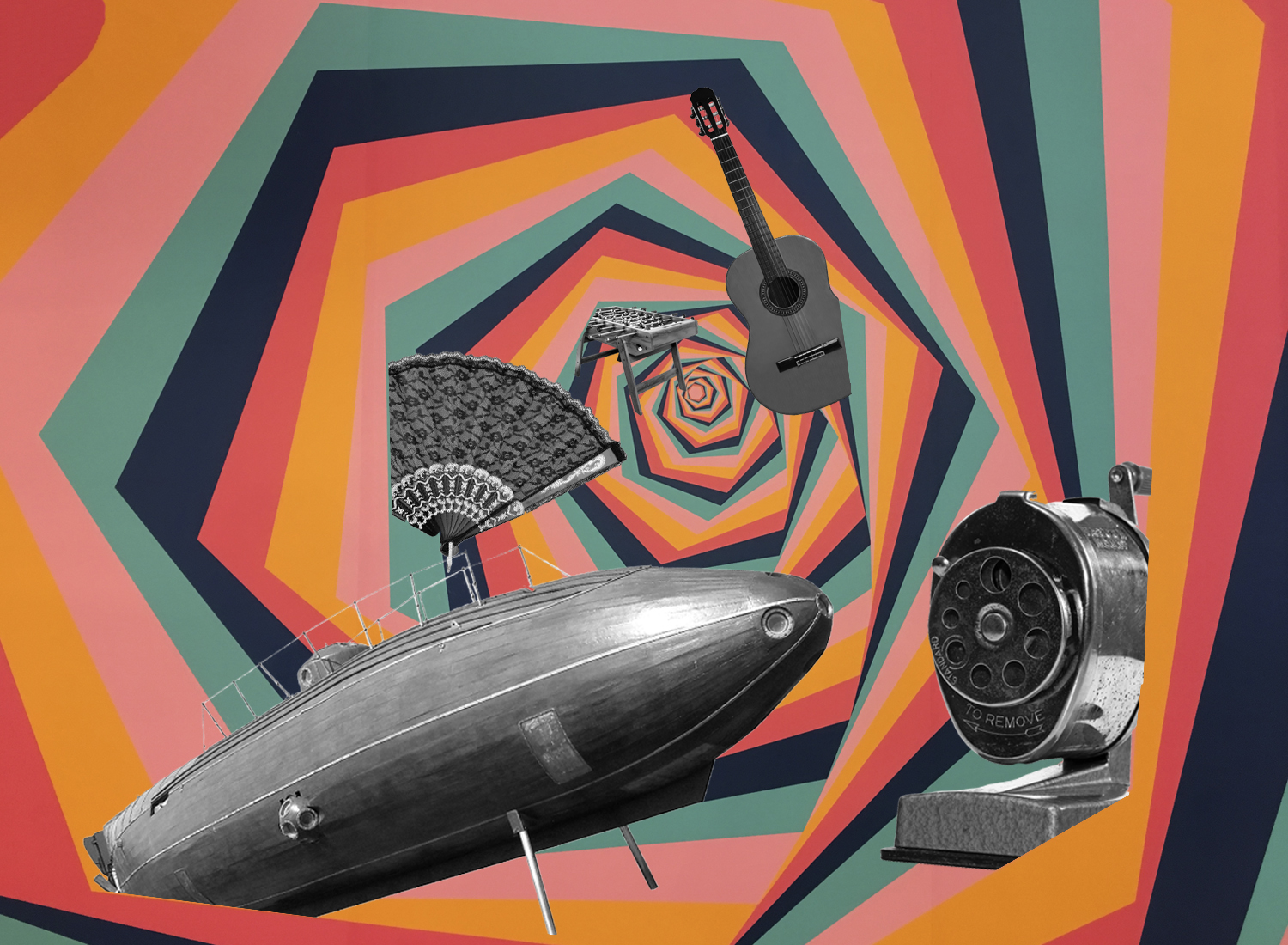 “Let them invent!” Don wrote in a lapidary phrase. Miguel de Unamuno to point out the lack of scientific and innovative character of the Spanish. This time Unamuno was somewhat misguided, because in our country a lot has been invented and sometimes very well, some of those devices have become universal and have even contributed to the well-being of our species.

A good part of them can be seen in a curious virtual museum, the Confort Museum, promoted by the French car brand Citroën (its new model, the C4, has been designed in Spain), which can be seen on Instagram. It is divided into four sections (comfort, design, technology, electricity) in which a journey of several centuries is traced through objects completely integrated into our daily lives such as the chupa chups, the mop, the guitar, the stapler, the razor, the table football, the submarine, the astronaut suit, the fan and many others. The architect of the museum is the architect specialized in design Juli Capella (author of books like This is how things are born Y Made in Spain, both published by Electa) and collaborates in the story Marisa santamaria, director of RED (Meeting of Design Companies) and trend analyst.

“There have been inventions a lifetime, but to talk about design as such we have to place ourselves in the Industrial Revolution”Says Capella. It is at that historical moment when people begin to design things without being involved in production, unlike the basket maker or the potter, who designed their baskets and pots and then manufactured them with their own hands. Now, the author’s design, the signature design, arises in the historical avant-gardes of the XX, especially the Bauhaus. Perhaps here begins the idea of ​​a designer that we handle today. “In Spain, the avant-garde, design, are truncated by the Civil War and the beginning of the dictatorship,” says Capella, “although it reappeared in the sixties, in the heat of developmentalism, after the time of autarky and poverty”.

It is in those years when great Spanish innovations emerge. For example, the mixer minipimer, by Gabriel Lluelles, who came to improve the glass blender (typically American) and which was bought by Braun. Rafael Marquina’s anti-drip oil can prevents us from staining the tablecloths with the inevitable drop of oil. The lollipops, by Enric Bernat, begins a new way of enjoying sweets slowly and without staining your fingers. Manuel Jalón realizes that, by attaching a stick to a cloth, you don’t have to break your back and knees to scrub the floor: that’s how the mop was born. “You can always refine a design,” says Capella, “but the mop is so perfect that it practically remains the same as when it was invented.”

As human knowledge is cumulative, in this museum, in addition to originally Spanish designs, there are also notable redesigns that happened in Spain following a line that came from elsewhere. This is the case of the fan. “It is of oriental origin, but it comes to Spain due to the intense trade with the East”, recalls Capella, “here a Royal Fan Factory, the fan is conceived as we know it now, with its rods and its landscape [el nombre de la tela] and it becomes popular throughout Europe ”. It is also the case of the Spanish guitar, which is from the family of the multitude of string instruments that circulated in the Middle Ages or in the Renaissance. Juan de la Cierva’s autogyro is an important milestone (a “necessary precedent,” in Capella’s words) on the way to the current helicopter.

The most recent design on display in the museum is the surgical arm, created by the Maimonides Institute in 2015, a robot that reduces costs and allows the surgeon to operate with 3D glasses. Where is Spanish design going now? “There has been a great evolution at the end of the twentieth century and what we have in the twenty-first,” says Santamaría. “We have new generations of designers who have been trained abroad, who move with ease on the international scene and who, in addition, can work from rural or peripheral environments to the entire world”.

Spanish companies are increasingly taking design into account, considering it from the beginning of the processes (using, for example, the Design Thinking, the analysis of the problems in the way of the designers). There is a turning point in the previous crisis, points out the expert, in which companies realize the importance of exporting, of improving their products and their packaging, to design new distribution and logistics processes, etc. “We have always considered design as an added value,” says Santamaría, “but the ‘added’ is now overflowing.”

For its part, society is increasingly understanding the essences of design better. “Design has been misunderstood, and the designers are to blame,” says Capella. “In the eighties design was sold as something bizarre, expensive, for posh people.” But, as demonstrated in this virtual museum, design permeates everything and influences the day to day. “Let’s look at the clip, which is an incredible design,” continues the architect. “It is expensive? Is it an author? Is it bizarre?

What is missing in Spanish design is the generation of its own story. “For example, Italian design has it. Also the Nordic one ”, points out Santamaría. “In some countries they have public institutions especially focused on design, something that is lacking in Spain. It is necessary to generate a narrative line typical of Spanish design ”. Although there is a lot of talent and creativity, there are those who lack more coordination between designers and industry, between creation and production. Also more support from the public sector.

Unamuno continued saying that when “they” invented, we would benefit from their inventions. But, on the contrary, a good part of the terrestrial orb has benefited from these inventions made in Spain.

The anti-drip oil can

Who invented it and when. Rafael Marquina. 1961.

His story. It was in 1961 when the architect and designer Rafael Marquina invented the anti-drip oil can, one of the simplest, most brilliant and most copied inventions in the world: until he was born, it was practically impossible not to use the oil can without getting lost with the drop on duty.

His story. Juan de la Cierva, in addition to being an aeronautical scientist, canal, road and bridge engineer and aviator, was one of the great inventors of our country. We owe the convenience of one of the most practical transports ever invented to him, as the forerunner of the helicopter. When the Murcian inventor developed the articulated rotor, which ended up becoming a key part of helicopters, he did not trust this system too much as he thought it was prone to accidents.

His story. One of the most viral and at the same time simplest inventions in our history took place in 1959, when Enric Bernat, a confectioner and pastry chef from Barcelona, ​​went around the world with a candy glued to a stick with the Salvador Dalí logo. Making the world an easier place doesn’t always have to be difficult.

Who invented it and when. Antonio Torres Jurado. 1850.

His story. The classical guitar was devised in Spain between the 13th and 17th centuries, but it was Antonio Torres who, in the middle of the 19th century, came up with the design that is still used today. Its curvy shape was designed to accommodate the shape of the body of the person who touches it. There are still different legends about the origin of the first guitar.

Who invented it and when. Gabriel Lluelles. 1959.

His story. With this simple device, Lluelles was able to notably improve domestic culinary work in Spain. But its success was such that it spread to various European countries through the German company Braun, which bought its device.

When it was invented. It was created in Japan in the 7th century and began to be used in Spain in the 14th century.

His story. The fan fitted perfectly into the Spanish climate and had a great development when it became fashionable among the aristocracy. In the 19th century there was even a Royal Fan Factory. It has been immortalized in paintings from Velázquez to Picasso and is an iconic element of flamenco dance.

Who invented it and when. Ignacio Urresti. 1945.

His story. Despite not inventing the first pencil sharpener in history, here in Spain we wanted to contribute our point of view by making one much more comfortable to use, inspired by a coffee grinder. We scored that goal.

His story. At the beginning of the 20th century, another of the minds of our country decided to turn on that light bulb of ideas that we have used so much, and it did so with its own switch made in Spain. More than 100 years later, Simón, the company, continues as a leader in useful and cutting-edge electrical equipment. His model 31, created in 1978, with its characteristic curved corners, is part of the daily lives of several generations, and of our sentimental education.

Who invented it and when. Anonymous. Century XVIII.

His story. Originally they were made of hawksbill from the shell of turtles. Fortunately, today they are made with synthetic materials, but their use remains undaunted: their dramatic silhouette completes women’s hairstyles at weddings, christenings, communions or festivities of great tradition.

Who invented it and when. Narcís Monturiol. 1859.

His story. In the middle of the 19th century, it was a Catalan engineer, intellectual, politician and inventor, Narcís Monturiol, who decided that it was possible to move below sea level. Yes, the first submersible vessel is made in Spain.

Who invented it and when. Emilio Herrero. 1935.

His story. Emilio Herrero is without a doubt the Spanish inventor who has taken the concept of comfort further, to space to be more specific, with his diving suit to be able to go up in a balloon to great heights. As an anecdote, it is said that Emilio refused to be part of NASA for not including a Spanish flag in his expedition.

Who invented it and when. Azarquiel. Eleventh century.

His story. Azafea is one of the inventions developed by Andalusian science that contributed not only to astronomy but also to the orientation and navigation of the time. This instrument allows astronomical observation at any terrestrial latitude, hence it is considered universal. Thanks to him, it was possible to calculate, among other things, the height of the sun above the horizon, its position in the astrological houses and the geographical latitude of the place of observation.

Who invented it and when. Alexandre Campos. 1937.

His story. The most widespread version of table football was devised by a Galician poet, editor, poet, anarchist and inventor. Campos decided at the beginning of the 20th century that the beautiful sport could be carried comfortably to every home without having to put on high-heeled boots. Home or the bar, of course.