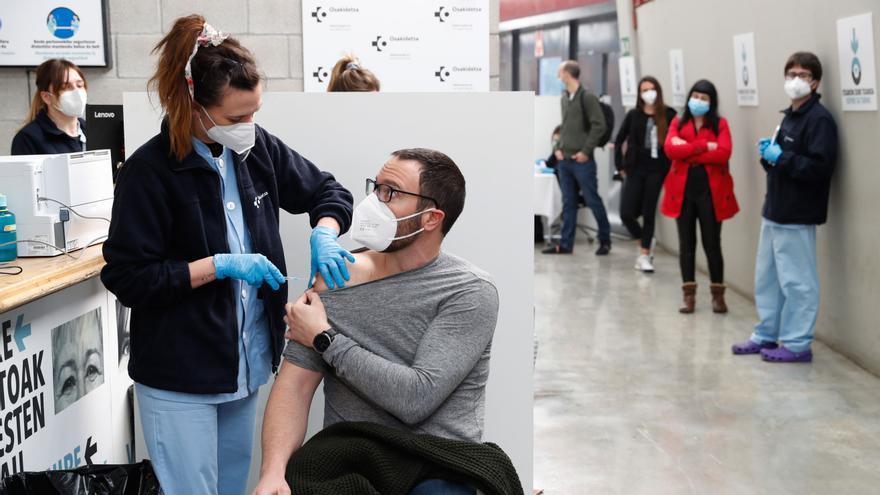 The incessant increase of contagions among unvaccinated groups, especially the youngest, has accelerated the plans vaccination communities to begin immunizing those under 30 years of age in July, which is why some territories have already opened the self-citation system.

The decision to include young people in vaccination campaigns coincides with the appearance of a super outbreak related to end-of-year trips by students to Baleares, that keeps 249 isolated in Palma, quarantined more than 4,000 people and more than 1,200 affected by covid-19, including in the ICU an 18-year-old from Elche (Alicante).

Although vaccination advances at different rates in each autonomous community, Health has been in favor of overlapping the different age groups to stop the infections.

The Board of Andalusia expects to slow down the vaccination rate in July due to the decrease in the number of doses that are going to arrive, which will make it impossible to continue to lose age at the rate of previous months.

Health officials hope to continue calling people of 33, 34 and 35 years old in July, maintaining the age progression because they consider that taking a leap and starting now with those under 30 would mean taking doses away from those over this age.

The Aragonese Government, which has planned open the appointment for the vaccination of people over 18 years of age at the end of July, has launched this Tuesday the self-appointment system for those born in 1984 and 1985, that is, people who turn 37 and 36 years in 2021.

In addition, next Thursday the appointments will be available for those born in the years 1986 and 1987.

It is one of the communities that does not plan to start vaccinating people under 30 years of age and at this moment vaccination is focused on the cohort between 30 and 39 years of age.

Also Read  A woman is shot dead inside the Capitol

But if it contemplates immunizing students from the Erasmus program and the like in July.

The Ministry of Health opened the appointments last friday to get vaccinated against covid-19 to young people between 16 and 29 years old in Menorca, Ibiza and Formentera, and the inoculation of doses was started three days ago.

In Mallorca, it will be from tomorrow, Wednesday, when the self-appointment for this age group opens.

The rate of vaccination in the Canary Islands varies depending on the island. In La Gomera, La Graciosa or El Hierro they are already vaccinating the population between 12 and 16 years old.

However, in Tenerife and Gran Canaria, vaccination is currently focused on the group between 30 and 39 years old, although some 11,000 appointments of people in this group have already been advanced in order to start as soon as possible with those under 30 years of age.

For the Cantabrian Ministry of Health, the priority is that older people are vaccinated against covid and the campaign now focuses on the 40 to 49-year-old group and on applying the second dose to all those who were vaccinated with the first AstraZeneca.

But, the possibility of lowering the vaccination age will depend on the arrival of vaccines, always overlapping with the rest of the elderly.

Castilla la Mancha you are vaccinating the age group 30-39 years and it is planned to start with those under 30 in the coming weeks.

Likewise, the regional Executive has announced that in mid-August it will launch the self-appointment from the age of 12.

The regional government maintains the initial planning by age groups, and plans to vaccinate the 30-39 age group in the second half of July.

In addition, it also prepares the self-appointment system for those under 30 years of age.

Catalonia studies opening the vaccination of hit everyone under 30, at a time of continued growth of infections among the youngest.

Young people between 16 and 29 years old could have their turn in a few days, while adolescents between 12 and 15 years old would have to wait until August or even September, so the Generalitat plans to vaccinate them in schools at the beginning of the course.

The president of the Valencian Generalitat, Ximo Puig has indicated that if vaccination is accelerated from 30 to 40 years in July, in August it will be possible to reach “a broad coverage of young people”.

With this objective, it is intended that all university students, when the first weeks of September arrive, can already be vaccinated.

The Extremadura community is vaccinating the age group between 30 and 39 years.

The Ministry of Health has prioritized vaccines for agricultural seasonal workers, students who go to other countries, and those under 12 years of age who have a significant disability, but no dates have been specified to inoculate the doses.

It is maintained in vaccination to people between the ages of 40 and 49 and you’ve just started with the 30-39 range.

The Xunta estimates that as of July the self-appointment system will be opened for minors under 40 and of legal age, while with respect to schoolchildren it wants to follow the national strategy and for the moment it does not foresee “special consideration” for Erasmus students.

In Madrid, the Ministry of Health wants to open as of July 5 the self-appointment system for those who are under 39 years old, in order to streamline the process.

In addition, the health authorities have announced that if there are free spaces, they can be used by people of “28 or 36 years.”

The president of Murcia has announced that in August the vaccination of young people will begin aged between 12 and 29 years.

Currently, the population between 35 and 39 years of age is being vaccinated.

Navarra will begin with the vaccination of the age groups between the ages of 20 and 29 at the end of July.

The Basque Government follows the criteria of vaccination by age, and their priority at the moment is to end the population between 40 and 49 years old.

However, over the next seven days 33 people could start to be prodded.

It is one of the communities that has not yet specified the exact date on which the inoculation of those under 30 years of age will begin.

The Riojan Government is currently addressing the initiation of immunization to the population aged 40 to 44 years.

Ceuta began on June 22 to immunize people born in 1991 against covid-19 and has already vaccinated 10% of those between 20 and 29 years old.

For its part, Melilla plans to end the vaccination campaign against the coronavirus next week after starting this Tuesday to vaccinate those under 30 years of age.

The immunization of schoolchildren before the start of the course remains unspecified, although it is expected to take place in the two weeks prior to that date, as reported by the Ministry of Health.