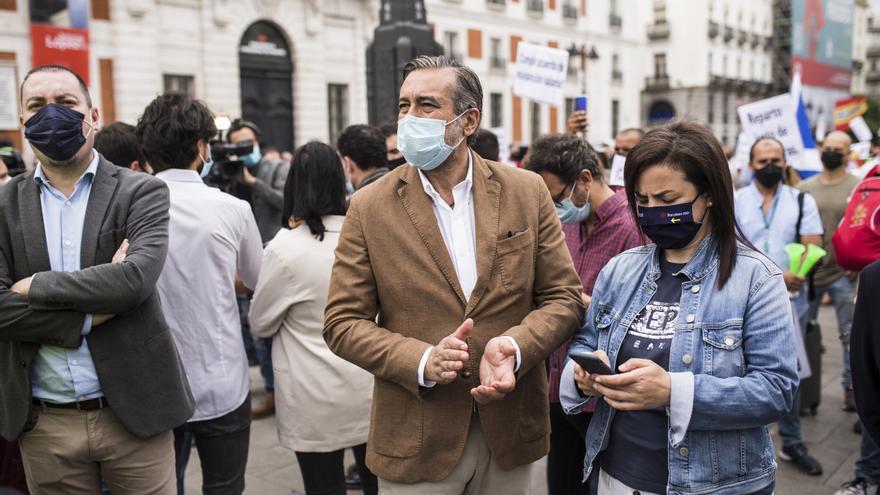 The criticisms of regional governments that continue to apply their own measures, those of the parties and sectors affected by the new restrictions on hospitality and nightlife, have continued this Saturday, the day on which the BOE has published the order of the Ministry of Health .

Madrid, one of the communities that voted against these new capacity and schedule limitations, will appeal to the National Court, has announced the acting Minister of Justice, Enrique López, who has insisted that the Executive is invading the competitions autonomic.

In any case, they will continue with the same measures they were applying and which, according to the counselor, are “technically better” in terms of containing the virus and “better than those proposed by the Government.”

Also Galicia, another of those who rejected these limitations, will continue for the moment with its “roadmap” while their legal services determine whether or not the rule is binding, explained the vice president of the Xunta, Alfonso Rueda.

The Minister of the Presidency of Andalusia, Elías Bendodo, has warned the Government not to have them “to give the coup de grace” to the hotel industry and ruin it definitively, after having been “punished” throughout the pandemic.

It has insisted, like the rest of the territories that voted against, that the Government cannot impose measures that are not within its competence and that were not unanimously adopted by the Interterritorial Health Council.

These measures come into force with the publication this Saturday in the Official State Gazette and are mandatory until the Minister of Health, Carolina Darias, “approve the end of its validity” prior agreement of the Interterritorial Council, as is stated in the order that transferred yesterday to all the communities.

The restrictions on schedules and capacity depending on the level of incidence of Covid will also be appealed by the most important sector associations of the Community of Madrid, considering that it is “a new obstacle for the recovery of leisure and cultural activity , and an interference in regulatory powers “.

In another of the most affected communities, that of the The Rioja, governed by the PSOE, the measures have not been adopted either and the Executive has reported that its Council -which is scheduled for next Tuesday, June 8- will transpose the declaration of coordinated actions into the Plan of Measures according to Indicators in force in La Rioja against Covid-19, published in the Official State Gazette. Therefore, until that day, in La Rioja the current Plan of Measures and the precautionary measures of the TSJR remain in force in their respective fields of application.

The Basque Government, meanwhile, has reiterated that the preventive measures it approved last Monday to contain the pandemic are still in force. despite the publication in the BOE of the resolution with the inter-territorial agreements on Wednesday.

The Vitoria Executive has insisted that the Health Emergency Declaration approved on August 17 of last year and its own regional plans are in force in the Basque Country.

The decision to implement the new restrictions went ahead with the vote against in Madrid, Galicia, Murcia, Andalusia and Catalonia, and the abstention of Castilla y León. Euskadi did not even participate in the debate.

The new restrictions on hospitality and nightlife

Hereinafter, Nightlife may reopen until 2 a.m., extendable at 3 a.m., in communities that are outside risk level or alert level 1Today, Galicia, Cantabria, Navarra, Extremadura, the Valencian Community, Murcia, the Balearic Islands and the Canary Islands. Euskadi and La Rioja are at alert level 3 and the rest at 2.

The consumption of drinks and food in these places, both indoors and outdoors, will be done seated, with a separation between the chairs of different tables of at least 1.5 meters.

They may not exceed 50% capacity inside; the outdoor terraces may occupy all the permitted tables, which may only be occupied by a maximum of 6 people indoors and 10 outdoors.

If the territory reaches alert level 2, the community may consider authorizing the opening of nightlife venues with the restrictions that are proposed at the health traffic light, which reduces the capacity to a third.

According to the hostelry, if the territory is outside the risk levels, it will be allowed half of the capacity inside, being able to increase by 10% if measures are applied to ensure a high level of ventilation and air quality control.

On the outdoor terraces, all the tables separated by 1.5 meters can be occupied and occupied to the maximum by 6 people indoors and 10 outdoors. They will be open at most until 1 a.m. and will stop serving at midnight.