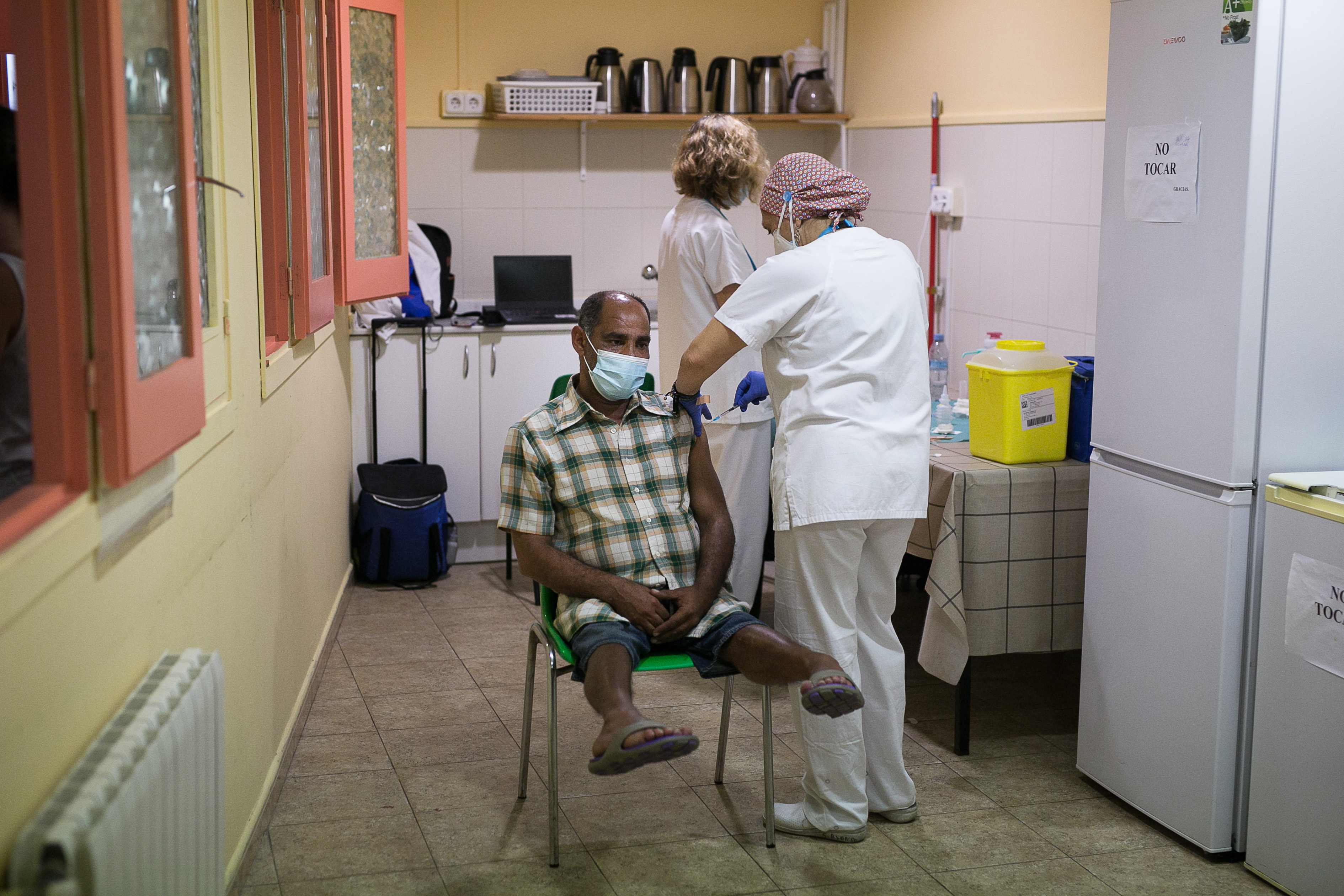 In a not so distant time when vaccines against the coronavirus were scarce in Spain, Janssen’s, a single dose, promised to be the panacea to accelerate towards the goal of 70% of the population with a full schedule in summer. But the problems in its manufacture and the infrequent side effects caused by the drug left it restricted to a small part of the population: only two of the 37.2 million people vaccinated have been inoculated with this serum. Among them, the campaign selected seasonal workers, the homeless and other vulnerable groups with difficult access precisely because it only required a puncture. Now that the Ministry of Health has scheduled a second dose for them to reinforce immunity, the autonomous communities have the task of locating them again.

They are setting up the same networks to capture them and begin to revaccinate them as of November 15, through the censuses they made for the first puncture, or through NGOs and associations that have access to these groups. But it is not always easy, since it is about homeless people or, in the case of seasonal workers, many immigrants, often without papers, who move itinerantly wherever there are campaigns.

The bulk of those who were vaccinated with Janssen, however, do not respond to these characteristics. Most were people who were lucky enough to receive this drug, just as any other could have been. Although at the beginning of the vaccination some septuagenarians began to be pricked, it was a minimal number. When the side effects appeared in the attenuated virus vaccines (Janssen and AstraZeneca), they were restricted to those between 40 and 70 years old: in older people, the health authorities decided to inject only messenger RNA (Pfizer and Moderna) because of its greater effectiveness, and in younger people, it was discarded because they presented the most serious reactions.

An exception was made for minors of this age in people who were expected to be difficult to locate, among whom, in addition to the aforementioned, also included aid workers, seafarers, Erasmus students and, due to the urgency of the Eurocup, the national team players. Spanish football. Not all communities provide the number of vulnerable individuals they must recruit for the second dose. The Comprehensive National Strategy for the Homeless It estimates that some 33,000 citizens are in this situation, although it is a document from 2015 and sector organizations estimate that the number is considerably higher and that it may be around 40,000. On the other hand, the agricultural sector employs approximately 300,000 temporary employees, of which around half are foreigners, according to the Ministry of Agriculture. Ultimately, communities have to locate tens of thousands of people for that booster dose.

Manuel Sánchez, president of the Table of the Third Sector of Andalusia, which brings together a dozen NGOs, explains that the first dose “was complicated.” “But we were satisfied because we had to mentalize people, who believed that the covid was a story and was not real. There was ignorance and disbelief in religious groups that deny the pandemic. There are many people, scattered and some unattainable that our technicians had to mentalize ”, he says.

Lleida Red Cross was this summer the interlocutor of the Department of Health of the Generalitat to vaccinate the thousands of seasonal workers who lived in settlements in the Segrià region. A spokeswoman for the entity assures that no one has contacted them for the second dose, but admits that “it is an impossible mission.” “This summer they identified the people who vaccinated even in the settlements themselves, but they are workers who move across the country in campaigns from south to north and now they will be very difficult to detect,” he laments.

In Lleida, 10,500 workers in the agricultural sector were vaccinated this summer, not all of them were seasonal workers. In the province 18,000 doses of Janssen were injected and, taking into account that more than 23,000 temporary workers were needed, almost all were destined for this group. The delegation of the Department of Health in Lleida has informed EL PAÍS this Friday that it has not yet received the guidelines and protocols to try to contact people already inoculated with a first dose, who now need a second, and are difficult to contact, whose figure is unknown.

These difficulties in Catalonia contrast with the statements of the Minister of Health of Aragon, Sira Repollés that pick up the SER Chain: “In principle, we do not foresee that we will have any special problems. We have a perfectly delimited census of the people who have been inoculated with the Janssen vaccine and, either by the self-citation process or by active appeal, as we deem appropriate, we will proceed to the vaccination without any problems ”.

The seasonal workers were a sector that was viewed with great concern, since their precarious living conditions were one of the triggers of the second wave that began in the summer of 2020. The circumstances now are very different. The decision to inoculate a second dose has been favored because it has been proven that Janssen’s vaccine protects less than messenger RNA vaccines and that, with an extra dose of these (Moderna or Pfizer), protection can be considerably increased.

But the levels of protection maintained by those who received Janssen remain very high. A health study shows that the effectiveness against hospitalization is between 86% of Janssen and 98% of the complete vaccination cycle with Moderna or the so-called heterologous regimen of AstraZeneca with another dose of messenger RNA vaccines. The difference is greater for symptomatic infection: 64% for Janssen versus 90% for AstraZeneca and second dose of Pfizer or Moderna, which is the immunity that those vaccinated with Janssen are now intended to achieve.

Immigrants are generally young people who already had a very low risk of becoming seriously ill from covid. Even if they are not located for a second vaccine, the risk to their health is minimal. It is somewhat greater for the homeless, who suffer from very precarious living conditions that shorten their life expectancy by between 20 and 30 years.

Gonzalo Caro, from the NGO Hogar Sí, emphasizes that the lack of a roof to live under not only diminishes the right to housing, but also to health. “It will be difficult to locate many of these people. Some were in shelters, where they do not live permanently. Others are in the street and although there are organizations that have their circuits, they are not infallible ”, he points out.

When it comes to re-vaccinating as many homeless people as possible, even if there are no censuses, the worst that could happen is that those who have not received any vaccine get their first dose, while those who did receive Janssen complete the guideline. “But the lack of a home makes it impossible to monitor the health of these people, of whom 20% do not have a health card,” concludes Caro.

Ferran Busquets, director of the Arrels Foundation to help the homeless in Barcelona, ​​assured EL PAÍS this Friday that, despite having asked Salud about the second dose of Janssen, he has not received any response. “In Barcelona, ​​about 1,100 people sleep in the open. In our entity 62 people were vaccinated thanks to the fact that the health workers from the Drassanes clinic moved to our day center. The problem that there will be with the second dose confirms that, once again, the homeless seem like second-class citizens who find it difficult to have access to basic rights such as health ”.