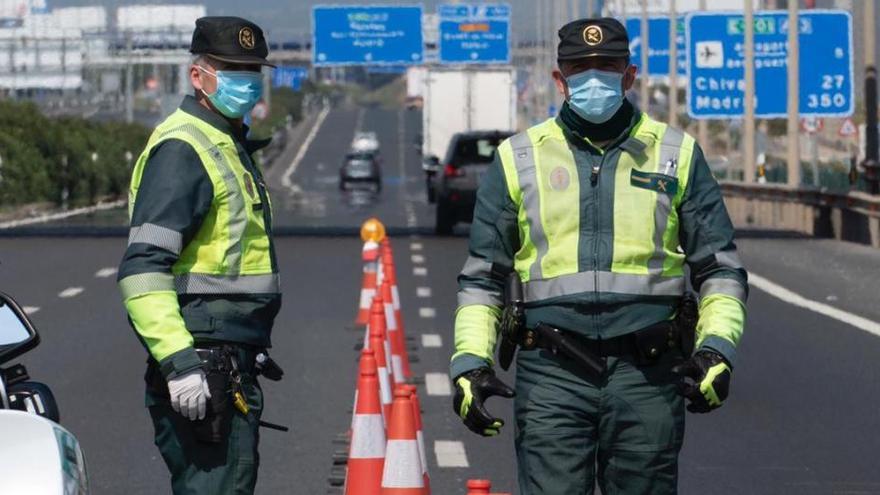 Just 24 hours before the Christmas celebrations and with a cumulative incidence of more than 230 cases per 100,000 inhabitants, 12 points more in a single day, the autonomous communities are shielded against the rebound in infections in the face of Christmas. This Wednesday the restrictions of the Christmas Plan agreed with the Government begin and there are up to six territories that request proof of travel, which is only allowed in the case of visiting relatives and friends.

The autonomous communities notified this Tuesday to the Ministry of Health 10,654 cases of Covid-19, of which 5,637 were diagnosed in the last 24 hours, compared to 2,156 registered on Monday, raising the global number of people infected by coronavirus to 1,829,903.

So just Valencian Community restricts entry and exit mobility, except for residents, while Extremadura, Murcia, Melilla and Ceuta eliminate the term attached due to the complexity to regulate their displacement. In every house, several CCAA, such as the Community of Madrid, Aragon, Navarra, La Rioja and the Basque Country, request a document of responsibility to prove the displacement.

These are the restrictions for each autonomous community:

The Government of Isabel Díaz Ayuso decreed this Tuesday the perimeter closure of the region from December 23 to January 6. However, citizens who have to return to their family residence from outside the region or those who have to leave will be able to do so without problem, as long as they present a document of responsibility.

Family gatherings are limited to six people and the curfew from 0.00 to 6.00 hours, except the nights from December 24 to 25 and from December 31 to January 1, which is delayed by an hour and a half (1.30 h). Hospitality and commerce may open with capacity restrictions.

The Catalan government agreed on Tuesday a perimeter confinement that will begin at 00:00 in the regions of La Cerdanya and El Ripollès, where you can only enter for justified reasons, the restoration, indoor sports activities and a good part of the cultural activities will be closed.

On the other hand, mobility is restricted to the local area, with the exception of those family units that move to a second residence, and the perimeter closure of Catalonia is maintained, although it will be allowed to return to the family home.

The curfew will begin at 10 p.m., except on Christmas Eve and New Year’s Eve, which will be at 1.30 a.m., and Twelfth Night at 11 p.m. Family gatherings are limited to six people, except on holidays, which may be 10 members of a maximum of two households.

The Valencian Community announced last week its perimeter closure until next January 15, only residents who return home can enter, which does not include family members or relatives. The Generalitat has also limited Christmas lunches and dinners to six people, of a maximum of two groups of coexistence, and the curfew will come into force at 23, except on 24 and 31, which will be delayed at 12 night.

Andalusia also maintains the perimeter closure but with the exception of relatives and close friends. In addition, the Board has divided the festivities into two sections. In the current one, which will last until Sunday, December 27, citizens can move freely between Andalusian provinces. The store has returned to its normal hours and the hospitality industry closes at 6 p.m., although you can raise the blind again to serve dinners between 8 p.m. and 10:30 p.m. Only cafeterias or bars that do not serve alcohol may open uninterrupted hours.

The night curfew will be from 23 to 6, except on Christmas Eve and New Year’s Eve, which will start at 1.30. On those two nights, the hospitality establishments may open until 1. Meetings may be of up to 10 people on the most indicated dates.

Community maintains the regional perimeter confinement and of the three provinces until January 12, and will only allow trips inside and outside the community between December 23 and 26 and January 30 and 2 to territories of habitual residence of relatives, always with a responsibility document. The night curfew will be from 23 to 6 hours.

The entry and exit of people to visit relatives will be allowed in two periods: from December 23 to 26 and from December 30 to January 2. This exception is not for close associates. The curfew is maintained at 10 p.m., except on December 24 and 31, which is extended to 1.30 a.m. The closure of the community will be in effect until next January 10.

The time restriction will be at 00:30. The community maintains the limit of 10 people in family and social gatherings for Christmas lunches and dinners in the private sphere on December 24, 25, 31 and January 1, but not in the hospitality industry.

The curfew is maintained from 10 p.m. to 6 p.m., although on Christmas Eve and New Year’s Eve the cut-off time will be until 1:30 a.m. just to go home. The meetings will be of 6 people extended to 10 on the days indicated, with a maximum of two different coexistence groups. The mobility of relatives and friends is allowed on the dates.

From last midnight and until 11:00 p.m. on Friday 25, all Galicians will be able to leave the councils to visit relatives. In addition, night mobility runs from this Thursday, Christmas Eve, at 1.30 in the morning, instead of the curfew at 23.00 that will govern the rest of the days.

Starting this Wednesday, December 23, and until January 6 Visitors may enter for health, work or family visits. This decision may be reviewed on the 28th by the clinical committee.

Visitors from Madrid, Extremadura, Castilla-La Mancha, Catalonia, the Balearic Islands and the Valencian Community will have to register their visit on the Health website.

The community has reduced to six the number of people in family gatherings and eliminated the term close friend, so only family members can get together. It has also imposed the perimeter closure from January 23 to 6.

Faced with the spike in infections, heshops and hotels in the Basque Country will have to close at six in the afternoon on December 24, 25 and 31 and on January 1, 5 and 6, and on Christmas Eve and New Year’s Eve the curfew will be brought forward at 00:30. Also, at the end and beginning of the year, meetings are limited to six people and not ten. The Basques will not be able to move on New Year’s Eve, since the Government has decreed the perimeter closure to avoid celebrations.

Between December 30 and January 2, it will be forbidden for campsites to admit clients who had not stayed before December 28 because attempts to organize end-of-year parties have been detected.

Murcia It will only allow family travel on the most important days of Christmas, but not those of close friends. It has also ordered that bars and restaurants close from 6:00 p.m. to 9:00 p.m. on December 24, 25 and 31, as well as January 1, in order to avoid possible infections in the area leisure.

In addition, only a maximum of 10 people from three family units can meet at home; and the maximum number of diners in restaurants and bars is also limited to ten people.

The Christmas gatherings will be for a maximum of ten people and two different coexistence units. Bars and cafes must close their normal activity at 8:00 p.m. and from then on they will only have take away service. Responsibility document is required to move.

The Principality has Christmas party encounters limited to six people and has established the curfew on Christmas Eve and New Year’s Eve at 00:30 hours, one hour earlier than set. Although it maintains its extension until 7:00 am for the early mornings of Christmas, New Years and Kings.

Further, will maintain the perimeter closure of the community, although, as already announced on December 11, it will allow entry and exit to other territories to visit relatives up to the second degree (brothers, grandparents and grandchildren) and close friends, “the latter concept understood as those people with that, without having a kinship relationship, an emotional bond of a couple or similar is maintained “.

The Balearic Government will have sanitary controllers at airports and ports to monitor that all arriving travelers have a recent negative PCR test or have an appointment to do it and they agree to quarantine until the result is obtained. The limitations regarding the hours of hospitality or curfew differ between islands.

The Canary Islands, for their part, has confined Tenerife, except for family reunification.

The community has decreed the perimeter closure that may be broken between December 23 and January 6 to visit relatives during Christmas. The figure of the relatives has been eliminated.

Also with perimeter closure, between December 23 and January 6 to visit relatives during Christmas. The figure of the relatives has been vetoed. The curfew will be from 23 to 6 hours, but on Christmas Eve and New Year’s Eve it will begin at 1. The maximum number of people in meetings is four but on designated days up to ten people may meet. It has been recommended that the two coexistence groups are not exceeded.