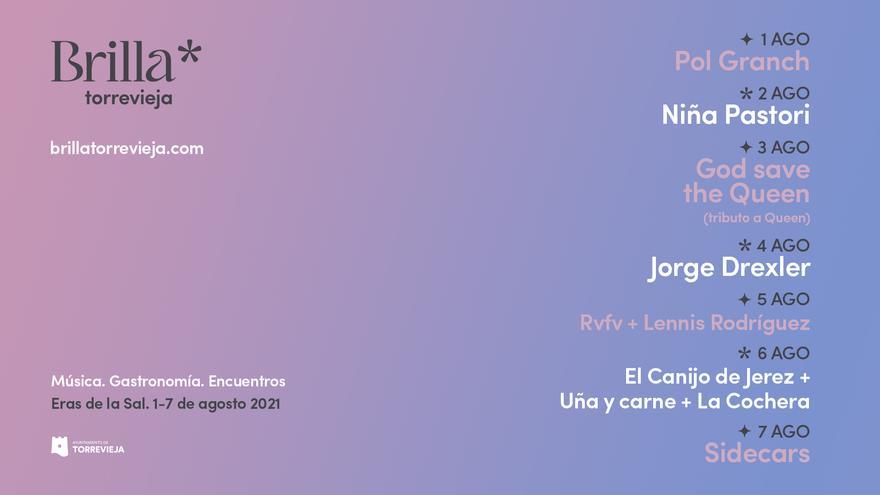 In August, the holiday month par excellence, the Alicante town of Torrevieja has a very varied cultural offer thanks to the musical performances that comprise the Brilla Torrevieja Festival. Rest, enjoy and recharge your batteries to the sound of your favorite singers in the midst of an idyllic atmosphere and a varied gastronomic offer.

Torrevieja hosts this summer the first edition of the festival that will feature the presence of various artists of the stature of Niña Pastori. During the first week of August, specifically from 1 to 7, concerts of different musical styles will be held in Era de la Sal, a privileged open-air space, surrounded by piers and piers.

Discover all the artists

Niña Pastori is celebrating this year of her 25 years of artistic career that will include a very special tour, in addition to other milestones, to commemorate an anniversary that magnifies her legend. Buy tickets here.

– God Save The Queen

God Save The Queen is surely the most important Queen tribute band in the world. It should be noted that, after more than 20 years of career, the Argentine band was chosen by Queen in 2018 to promote the film Bohemian Rhapsody. Buy tickets here.

Lead singer of the tribute band God Save The Queen

The heroes of Spanish rock return to present Ruido de fondo (2020), their sixth studio work, made of punches and caresses, with songs that hit the heart hard in a human and brave way. Buy tickets here.

In a short time, RVFV has become a musical phenomenon that has a following all over the planet.

Lennis Rodríguez is considered one of the great promises of urban music who falls in love with his personal voice and his original way of telling stories.

Twenty years have passed, there is nothing, since his debut with Los Delinqüentes. El Canijo de Jerez is undoubtedly synonymous with joy, partying and a way of understanding life in the purest “Garrapatero” style.

Its name is not by chance… La Cochera is a rumba and flamenco group that was born more than ten years ago in a garage in the city of Orihuela. Today they present their first work to us, and it is spectacular.

Uña y Carne intends to defend artisan music with nobility and rebellion. Based on the flamenco voice of Antonio Clavería and the versatility of the composer Carlos Salado, this group is definitely indescribable.

After more than a year away from face-to-face concerts, the Uruguayan artist will take to the stage again. It will be a tour in unique venues, seeking closeness and connection between the public and the artist as a vector of communication. Buy tickets here.

With its overflowing flag sensitivity and songs as exciting as they are versatile, Granch is one of the strongest bets for the present.

All performances will start at 22 hours, except Those of the August 6 that will start at 8:30 p.m. Nevertheless, from 7:00 p.m. you will be able to access the enclosure with the same input. In this way, attendees will have the opportunity to take advantage of the hours prior to the concerts to be able to enjoy, on a terrace by the sea, the gastronomic offer while listening to live music.

Much more than music

In addition to the musical offer, Brilla Torrevieja will have other spaces and parallel activities to concerts to be able to enjoy family leisure with gastronomic and artistic experiences so that the public can experiment and have fun through different innovative proposals.

By creating a multitude of spaces throughout the city, this initiative aims to create an idyllic environment where the public can connect with culture, creating unique and unforgettable moments. For the promoters of the initiative, another of the purposes is promote tourism and local commerce developing different actions that improve the economy of the region.

Since the organization of the festival, the importance of compliance with sanitary measures. That is why, the promoters ensure that all pertinent precautionary measures will be adopted so that the public can enjoy with complete peace of mind of the celebration of the different events, concerts and shows.