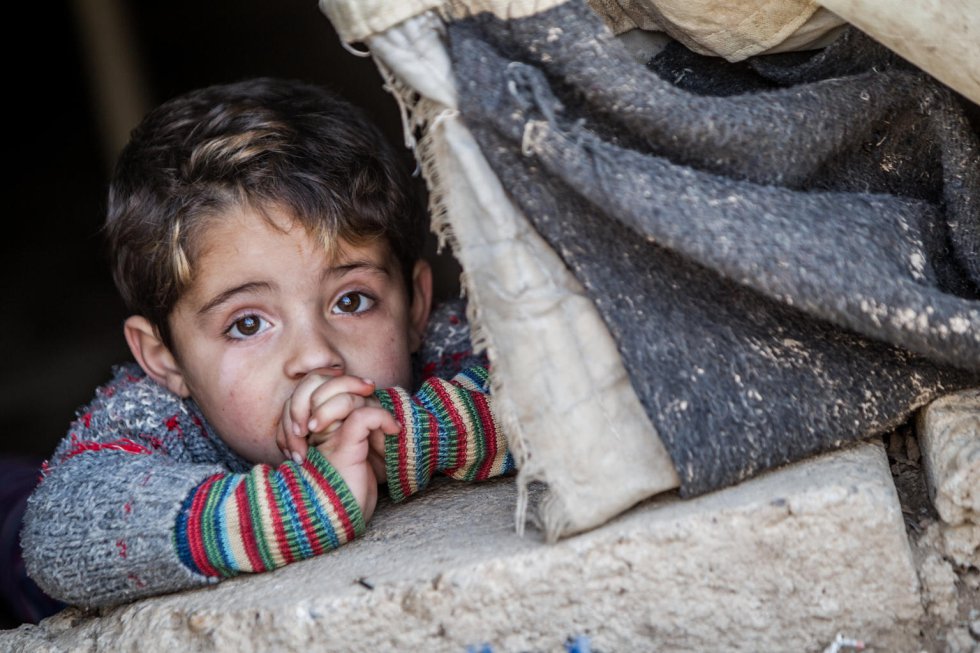 The war in Syria turns 10 years old and there is already talk of a generation of children hanging by a thread. Unicef ​​assures that 90% of them, mainly the almost five million who have been born since the beginning of the conflict, need humanitarian aid. The UN agency for children calls for peace in this contest that began on March 15, 2011, when a part of the population in the streets demanded the resignation of President Bashar Al Asad.

The human bill of war exceeds half a million people. Almost 12,000 of those dead were children, according to the Syrian Observatory for Human Rights. Other dramas are added to the death toll. More than 5,700 minors, some as young as seven, were recruited as soldiers for combat, according to Unicef. ISIS has been the most responsible: The Syrian Observatory assures that the terrorist group gave military training to a thousand boys who enlisted in its ranks under the denomination of “puppies of the Caliphate”. After the defeat of these jihadists in Syria and Iraq, in 2019 some of them were taken as prisoners and are in the so-called military camps. de-radicalization, like Al-Hol’s. In both this and others throughout the northeast of the country, 27,500 children of at least 60 nationalities languish, and among them and thousands of Syrian minors linked to armed groups.

In addition, a huge number of Syrian children beg inside and outside their country; others work in the countryside and in textile factories, for 10 and 12 hours a day, and the number of girls who have been married increases so that they are no longer an economic burden for their families in refugee camps such as those in Lebanon and Jordan. The situation in Syrian households, after a decade of conflict, is dramatic and has been exacerbated during the coronavirus pandemic. In the last year, the price of the shopping basket has increased more than 230%.

Unicef ​​has made balance of this decade and within the drama considers positive that 3.5 million Syrian minors have been able to access formal and non-formal education on their territory and in their neighboring countries. However, there are still almost 2.45 million within the country and another 750,000 Syrian children outside of it who are not in school; 40% of them are girls.

Unicef ​​has organized a virtual visit to Syria and Jordan for journalists in which, through a walk with a camera in hand, the organization has shown as proof of the great effort what was done in Aleppo, specifically in a rehabilitated school in 2017. This activity was encouraged A press conference followed, attended by Ted Chaiban and Juliette Touma, regional director and head of communication for Unicef ​​in the Middle East and North Africa. For his part, Osama Antibi, education officer in Syria, explained why and how they have recovered study spaces amid the ruins of the war. “We usually do school rehabilitation for two reasons; the first, the need for a learning space, and the second is to prepare the school and attract people and returnees to return to their hometown or their neighborhoods and communities. I believe that people will one day come back here to rebuild and recover their life before the crisis ”.

When the intervention began, that school in Aleppo had 50 students and now has more than 200. “That means that people are returning despite the lack of basic services such as electricity and water,” said Antibi. as he crossed a narrow path where before there were only remnants of the war. “This road was full of rubble, stones and even unexploded ordnance. It was very difficult to work in the last years. We try to defend the right of students to be safe while going to school, with the municipalities, with the authorities. And as you can see now, they can find their way ”.

The human bill for war exceeds half a million people; almost 12,000 of those dead were children

In another part of Aleppo, Unicef ​​has a community center where they offer various services to the population. Yassir Hemidym, also an education officer, explained that students can make up for lost time and get to the right level. “Here they have the opportunity to make up for the education they lost over the years. Many of them could not read or write, but were enrolled in sixth or eighth grade. So here they have the chance to start over from the appropriate academic level. “

Hemidym has then spoken with a group of teenagers and their responses reveal their pressing need to learn a trade.

“What do you want to do after finishing your classes here?”

-To work? Why? Don’t you want to finish school?

“What kind of crafts would you like to learn?”

“Does anyone in your family work as a tailor?”

The question has been extended to the whole class and the boys have answered that they want to be carpenters, shoemakers and some have affirmed that they already work in a textile factory, which began when they were seven years old and that they work 12 hours a day. Another has also confessed that he started at a printing press with seven years and now does it in a tailor shop where he usually has a 10-hour shift, but that he reduced it to attend classes.

“I wish you every success and I hope you focus on your studies.” It’s great that I’m taking the time to come here to study. I hope you really think about getting your ninth grade certificate and finishing your high school as well. It is possible to study and work. When I was your age I also worked while I was studying – Hemidym replied to the latter.

The high risk of desertion, due to economic factors, makes Unicef ​​praise those who have remained in the classroom. During the press conference, Ted Chaiban, who visited Syria in January 2021, referred to these children as “rays of hope”, but recognized that much remains to be done. “There are 3.2 million out of school, both within Syria and in neighboring countries.”

Chaiban has stated that they are in the right direction, but without forgetting the need to invest in education so that the war generation does not get lost. “Thanks to all the efforts of partners, governments, dedicated staff, civil society partners and, of course, teachers, we continue to have five million children accessing learning. Without this joint effort, we would have practically no students learning in Syria and around the country, and we would risk losing a generation in the next few years. “

Unicef ​​expects to raise 1,175 million euros in 2021. Most of that money, almost 700,000 million, will go to education, according to the organization official. “About a third of schools in Syria have been damaged or destroyed, or used by internally displaced persons or, frankly, for military purposes. We promote the return to those schools, but learning can happen in a community center as they saw it in Aleppo. It can occur under a tree. It can happen in a formal or informal way ”.

UNICEF figures for the past year indicate that they contributed to nearly 900,000 children receiving routine measles vaccination and have provided psychosocial support to more than 400,000. They have also supported 5.4 million people with access to drinking water through improvements in the supply system and during the pandemic they reached 55 million people with awareness materials, health measures, personal protective equipment for workers on the front lines, including masks, gowns and face shields, and are supporting for better distribution of covid-19 vaccines through the COVAX mechanism.