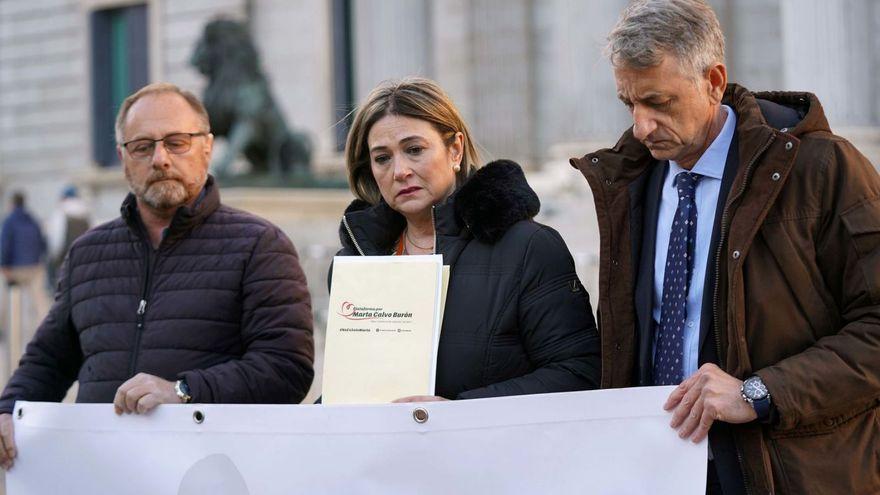 It will not be as a popular legislative initiative, but as a bill. The Congress of Deputies has already opened the door for the objective of the mother of Marta Calvo, the young woman from Estivella murdered two years ago, to achieve that the corpse concealment after the murder it became a legal reality in the Spanish legal framework.

As it has been publishing Lift-EMV, Marta’s mother, Marisol Burón Flores, has led the creation of a platform whose purpose was precisely to get her to be penalized, or to autonomous crime or as an aggravating circumstance, hide a body to minimize criminal responsibility, as in the case of Marta Calvo, unaccounted for since her murder on November 7, 2019 due to the lack of collaboration of her alleged executioner, or Marta del Castillo, disappeared for 13 years because her murderer, convicted and in prison , has given eight different versions, all of them false about what he did with the body.

On November 5, Marisol Burón, accompanied by the emergencist psychologist and co-founder of the ‘Platform by Marta Calvo Burón. Where are my rights? ‘ Mariano Navarro and Marta del Castillo’s father, Antonio del Castillo, presented in the Congress of Deputies the Popular Legislative Initiative (ILP) that proposed including as an autonomous crime the concealment of a corpse after a murder.

On the 16th, the Board of Congress debated this initiative and, according to the response now received by Marisol Burón, the ILP was inadmissible because the formula is not applicable in this case, since including that offense would force to change the Penal Code, an organic law, and, therefore, the highest ranking in the Spanish legal system. The legal framework that regulates the ILP – the Constitution itself and the organic law that develops it – do not contemplate that this popular proposal has the power to change an organic law, so it must necessarily end in inadmissibility.

In any case, the letter addressed by the president of the Board, Meritxell Batet, to Marta Calvo’s mother informs her that the governing body of Congress has agreed to “inform her of the possibility that her initiative is processed as a petition before the Chambers “, for what should submit a new proposal, this time under the petition formula.

In addition, it communicates that, “as soon as that communication is received”, The Bureau will send it to the parliamentary groups so that they are aware of it and, from there, either jointly – unlikely – or by political formations, they assume to carry out the proposal to change the law.

Regulation in the rest of Europe

The platform plans to carry out and deliver in Congress this week the petition for law, a right that regulates the Constitution itself and Organic Law 2/2001.

On the same day of the presentation of the ILP, Burón, Navarro and del Castillo They were already received by deputies from the Popular Party, Citizens and, at the last minute, from Vox, who agreed with the claim to support the initiative.

As for the socialist group, the deputies of the Equality Commission Susana Ros and Laura Berja are in charge of addressing this issue. Both met in mid-November with Marta’s mother and her lawyer and expressed their support and their intention to study how to carry out the legal modification. To do this, they have committed to studying how the rest of the European countries typify the concealment of a corpse and analyze how to include that crime or that aggravating factor in the Spanish legal system.