The Congress of Deputies approved this Thursday the organic bill for the protection of children and adolescents against violence. It is a pioneering text at the international level that places Spain at the forefront of the protection of children’s rights and that has gone ahead by far exceeding the absolute majority that it needed. It is not usual in these times that there is such important support, but the groups have put aside the political colors and the norm has garnered 268 votes in favor, 57 against and 16 abstentions. Only Vox and the PNV, the latter for competence reasons, showed their rejection. It now remains for its passage through the Senate, where new amendments will probably be presented, but as the process is urgent, the law may be published in the State official newsletter already in June.

Violence against children is a silenced reality. The data collection system is very poor. In 2019, more than 40,000 crimes against minors were registered, according to data from the Ministry of the Interior, which was based on complaints and police actions. About half of all crimes committed against sexual freedom had a child or adolescent as the victim. But these are only the tip of the iceberg. Many cases are not even reported.

Read here the keys to the child protection law

The norm is intended to be a paradigm shift, as was the gender violence law in its day. It prohibits all forms of violence against children and adolescents, and includes measures for the awareness, detection, protection and reparation of the victims. It aims to end impunity for serious crimes against minors, including pedophilia, by extending the statute of limitations: the time that the victim will have to report will begin to run when they turn 35, compared to 18 today. This means that crimes will not expire until you are at least 40 years old, and the most serious cases can be reported until age 50. This amendment was added this Wednesday in extremis and it is the only one that has come out this Thursday ahead in the plenary session of all those that have been voted.

In addition, measures are established to prevent secondary victimization, which occurs when, during the judicial process, the victim receives deficient care that makes him relive his trauma; the right of children to be informed and heard is reinforced; the Government is given a mandate to create specialized courts, and focuses on prevention, with a deployment of initiatives, from training professionals who work with children to the establishment of protocols in schools, sports centers and minors.

It is not common for all the groups that come up to the rostrum, with the dissenting point of Vox, praising the spirit of a norm. 576 amendments were presented, of which more than 200 were incorporated, and more than 70 were transacted between the different groups. It is a law that marks a before and after, said the two government parties. “We can become a world reference,” said the speaker from United We Can, Lucía Muñoz. “We want you to grow up without violence and live without fear,” said the socialist spokesperson for Social Rights, Sonia Guerra.

Despite the great consensus around the norm, differences have come to light within the coalition Executive. The purple formation has demanded from the PSOE its vote in favor of the prohibition of the entry of minors to bullfighting shows and an amendment in which it is proposed to increase the guarantees of minors in the event of evictions, by forcing the judge to carry out a proportionality trial before authorizing eviction from the home. Both have been rejected. Socialist parliamentary sources argue, regarding the first point, that the powers are autonomous, and regarding the second, that it is a matter that is already being negotiated in the future housing law.

“Nothing that happened to you is your fault”

Children’s organizations have been demanding this law for years. The Committee on the Rights of the Child recommended to Spain in 2010 that it approve a norm that comprehensively protects children, and in 2017 all parties voted on a non-law proposal that urged the Executive to legislate urgently. That urgency it has taken four years to become a reality. In the words of the Minister of Social Rights, Ione Belarra (United We Can), the norm “has had a very high consensus, but a low intensity”. He has given examples of real cases of minors who are victims of violence and their lack of protection, and has criticized that “the Catholic Church has been complicit too many times” in covering up sexual violence against children, something that “has to end.” Belarra has also addressed children directly: “If someone tries to make you feel guilty for what happened to you, I want you to listen carefully to my words: nothing that happened to you is your fault, ask for help because someone is going to help you” . 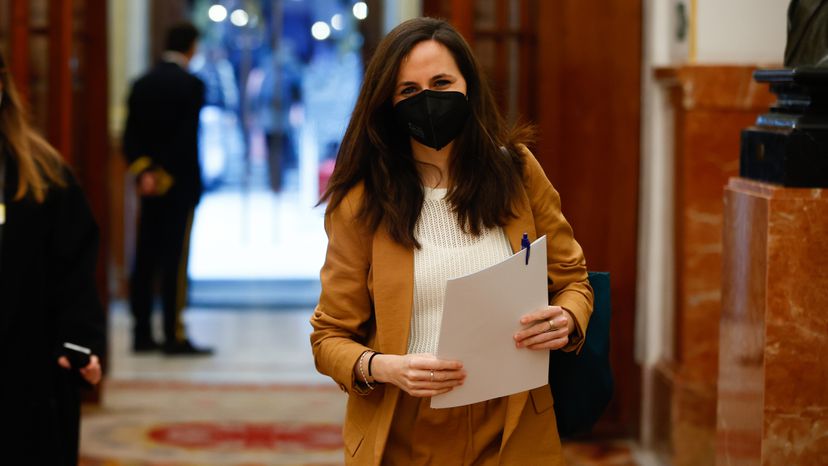 On video, the Minister of Social Rights, Ione Belarra, this Thursday in the Congress of Deputies.SERGIO R MORENO / © GTRESONLINE

The work to prepare this law began with the PP Government, the former socialist minister María Luisa Carcedo left the text very advanced and it was the first legislative initiative that Pablo Iglesias took to the Council of Ministers when he was the head of the Social Rights portfolio, last June. During the parliamentary process, as recognized by most groups, the norm has absorbed substantial improvements, such as the reinforcement of the protection of minors living in situations of gender violence or the prohibition of the parental alienation syndrome, which lacks endorsement. scientific, but it has been used by experts, lawyers and social workers to describe the manipulation of a parent, usually the mother, on their children to reject the other parent.

Alicia García, spokesperson for Social Rights of the Popular Group, has recognized that the law “is late” and that it is missing a “disability approach” and “more receptivity on the part of the Government.” Sara Giménez, deputy for Ciudadanos, has stressed the consensus around this rule. “Parliamentary work requires a willingness to agree and make improvements,” he said, “we must not forget what they pay us for, what we are here for.” It has required resources to be able to implement the law.

The main point of friction has come from the jurisdiction issue. In the words of Iñigo Barandiaran, of the PNV, the norm contemplates “a competency invasion that has no justification”, which has led his group to vote against it; Mertxe Aizpurua (EH-Bildu) has said that his group has abstained with a “bitter feeling.” PDeCAT has also abstained for this reason. Aizpurua has considered that the law should include the recognition of “institutional violence”, and the status of agent of authority granted to social services officials should be suppressed, something that, as it has explained, may increase the situation of power of the Administration before families in processes of removal of guardianship. ERC, who voted in favor, agrees on both aspects. But all of them have endorsed the parameters that the law defends.

The discordant voice has been given by Vox. “Woman, granddaughter, daughter, sister, friend, journalist, partner, deputy. Mainly I am a mother ”, began by saying Teresa López. “They want to clear their consciences,” accused the deputy of the far-right party. And he has slipped: “Progressive paradoxes. Protecting children is not promoting abortion. That is violence ”. López considers that families do not need accompaniment: “Is it positive parenting that parents cannot choose that their children can receive, at any age, in any school, affective sexual education?” “It is a law created to educate you in the image of what you represent, the destruction of the family, of life and of Spain,” he concluded his speech.

Resources to develop “a necessary law”

Children’s organizations and experts celebrate that the goal set more than a decade ago is now so close. “It is a necessary and pioneering law at a European and global level, due to its integral aspect. In Norway they launched a strategy, with several ministries involved, but there is no legislation of this nature. It is multidisciplinary and has a particularly preventive character, to prevent violence from occurring, and not so much punitive, ”says Ricardo Ibarra, director of the Platform for Children, which brings together 73 entities. However, it considers that there are still changes for improvement in its path in the Senate, as Save the Children has also opined, in areas such as centers for the protection of minors or the extension of the pre-constituted test, not only for children under 14 years of age. Noemí Pereda, professor of Victimology at the University of Barcelona, ​​adds: “It is very good as a starting point. But what we need now is that there is a budget allocation to implement everything that the law dictates as what would be ideal. And a multi-year plan to develop the necessary measures: you have to see when, how and above all with what resources they are going to be carried out ”.