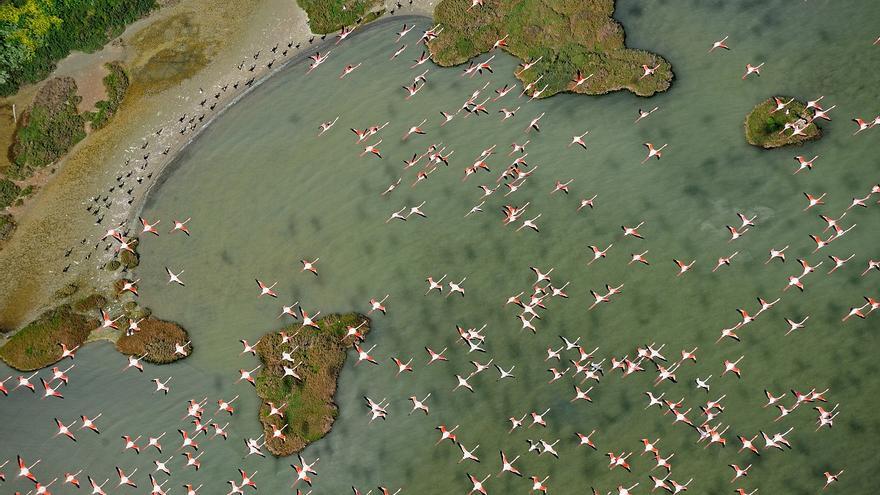 An initiative promoted by the Andalusian Parliament to legalize a large number of irregularly implanted irrigation systems in the area of ​​Doñana has provoked the wrath of conservation organizations and opposition parties. The bill, they say, violates the recommendations made by UNESCO for this space declared a World Heritage Site. The Andalusian Government, on the other hand, denies that the measure will allow irrigation to be expanded and assures that only a situation that has existed for a long time is legally recognized.

The non-governmental organization WWF, one of the most active against illegal irrigation in this area, has denounced to UNESCO “the bill that the Andalusian PP is finalizing and that seeks to amnesty 1,460 hectares of irregular irrigation in Doñana.”

As reported in a statement, this initiative “does not comply with one of the central recommendations of UNESCO” proposals last summer to urgently implement the so-called ‘Strawberry Plan’, in its current form as it was adopted in 2014 to try to “solve the problem of the chaotic growth of the area irrigated without permission”.

Given this, WWF has asked this international body to intervene “urgently” to avoid imminent modification of this Plan.

After noting that the Doñana National Park is one of the “most important natural spaces in Europe and the world and has been declared a World Heritage Site by UNESCO”, WWF has pointed out that the Junta de Andalucía is “responsible for the management of this natural area and has the obligation to guarantee compliance with international agreements and the recommendations of this body, if it does not want Doñana to be included on the List of World Heritage in Danger”.

WWF has considered that the modification of the Special Plan of the Forest Crown It will “seriously” affect the state of conservation of this World Heritage Site and “puts it at risk that it will be proposed in 2023 on the list of places in danger”.

Finally, they have recalled that last summer Unesco issued 15 recommendations in the face of “the poor state of Doñana”, which the Andalusian Government and the Spanish State “undertook to comply with”. In fact, in the last report sent by Spain to this body in December 2020, it recognized that one of the “most decisive actions to correct the problems of the Doñana aquifer was the implementation of the Special Plan for the Forest Crown”.

What’s more, “Far from ending the problem of the illegal use of water and soil, it will aggravate said threat and its consequences on natural values of this unique wetland in Europe and will generate social injustice by favoring farmers who have been flouting the law for decades over farmers who work for sustainable agriculture that respects the environment,” said WWF Secretary General Juan Carlos of the elm

Barely six months after the Court of Justice of the European Union will condemn Spain for “destroying Doñana”, “a new threat hangs over this space, which is going through the most critical moment in its history”. For this reason, WWF has asked the Junta de Andalucía not to allow the Strawberry Plan to be modified and, on the contrary, to reinforce and promote its execution, “immediately closing all the illegal farms that should not be consolidated in any case”.

Also Read  We can't stop sea level rise, but we still have a chance to stop it | Tamsin edwards

The Andalusian Government justifies its decision

For its part, the Andalusian Government has affirmed this Tuesday that the new regulation of irrigation in the area of ​​Doñana “It will not entail” any extension and has specified that what it seeks is to provide a solution to inherited historical rights of farmers who have been exercising them for decades.

This was stated at a press conference by the Andalusian Presidency Minister, Elías Bendodo, who downplayed the criticism raised by the opposition and environmentalists.

“Those who see a political opportunity in this should abandon all hope and peace of mind,” said Bendodo, who defended that the first interested party in preserving Doñana is the Board, for which he has expressed his “absolute” conviction that the park “is not will be affected.” “On the contrary: maximum protection”, emphasized the spokesman for the Executive, who promised that the Board “will always preserve” Doñana.

Regarding the regulation of irrigation, promoted by the PP in separate bills signed with Cs and Vox, he has remarked that “It will not entail any expansion, but rather seeks a solution to historical rights inherited from farmers who have been exercising that right for decades.”

The Andalusian Executive wants to balance the interests of farmers with those of Doñana, for which it intends that the proposal be agreed with all the agents involved in the processing of the new regulation.

On the possibility that the Autonomous Executive decides with a report on the content of the bill that regulates the changes, it has indicated that it will analyze the proposals that are made and that based on them, “if it is necessary for the Government to issue a previous report or that the competent Ministry does it, will be done”.

The Secretary of State for the Environment, Hugo Morán, has asked the Andalusian Government on Tuesday to veto the processing of the bill to regularize more than 1,400 hectares of irrigation in the surroundings of the Doñana park because it is a “deception to the sector” and generates unrealistic expectations.

For its part, United We Can for Andalusia has asked the European Commission to detail its position on the regulation to “expand” the irrigated area in Doñana and regulate the “illegal” extraction of water in the park.

Faced with these positions, Bendodo has argued that the Andalusian Government defends the environment “cloak and dagger”, has “Doñana as its flag and acts correctly”.