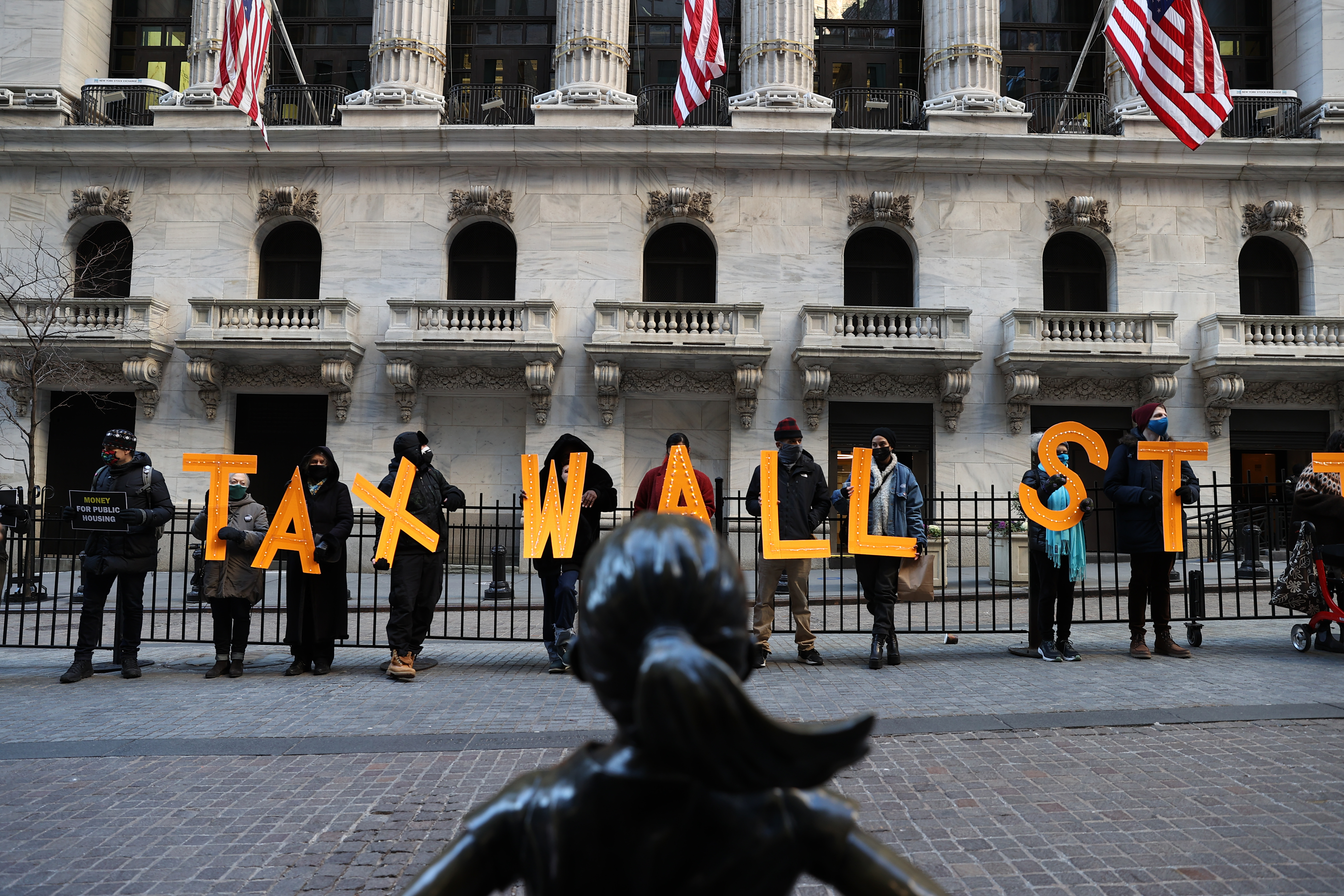 The fear that the global economic crisis due to the pandemic would trigger, at the same time, a financial crisis, seems to have disappeared. The money injected into the financial system by the richest countries not only prevented investors from panicking but went further, propelling stocks to all-time highs. As far as the markets are concerned, this test has already been passed. Or not? High-profile investors, experts and market watchers debate the near future. They wonder what will happen when this expansive monetary policy that has been propping up debt stocks and bonds traded among the world’s financial capitals comes to an end. At best, markets respond in an orderly fashion. At worst, countries in Latin America have the upper hand. The ghosts of inflation, inequality and capital flight lurk in the background.

After the pandemic and the first mandatory confinements, the European Central Bank and the Federal Reserve in the United States indicated that interest rates will remain at zero to encourage banks to continue lending. Additionally, both announced that they will buy billions in financial assets to boost liquidity in the system. Japan came next, announcing similar programs in the trillions of yen. Almost a year later, buying by the Fed, as the Federal Reserve is known, has reached unprecedented levels, sometimes buying trillions of dollars in bonds and other instruments in a single day. The monetary support has been, in short, spectacular and never seen before.

The Fed has become something of a captive buyer, openly declaring that it wants to flood the financial markets with money, thereby boosting prices. At the same time, the fact that its interest rate is zero has led Wall Street to buy debt from emerging countries, many of them in Latin America, because they offer higher rates. Two seemingly opposite realities converge here: while the region is identified as the most damaged by the pandemic and expects a slow recovery compared to the rest of the world, investors rush to lend them money, which they can only pay back if they recover in time and form. Investors are taking a risk, but it is unclear if they have measured it well.

“With so much stimulus in place, trying to find out if the economy is in recession is like trying to assess whether you had a fever after taking a large dose of aspirin,” wrote investor Seth Klarman in a letter to clients of his exclusive Baupost fund, according to him Financial Times. “But like frogs in water that is slowly heated to a boil, investors are conditioned not to recognize the danger,” he added.

Jeremy Grantham, a well-known British investor who heads his own firm, GMO, warned that markets are now pointing to a bubble that will inevitably burst “no matter how much the Fed tries to support it, with the damaging effects on the economy and investment portfolios that correspond. Make no mistake: for most of today’s investors, this could be the biggest event of their career. ”

Even the International Monetary Fund (IMF), in a less alarmist tone, puts to debate the possibility that the financial stability seen until today will come to an end in a note published on January 27. “With investors betting that supportive policies will stick, it seems that overconfidence is seeping into the markets; This, together with the apparent uniformity of investors’ opinion, increases the risk of a correction in the markets or “revaluation”, says the IMF report.

‘Gamestop’ and other anomalies

The markets are already beginning to act in an atypical way, explains Daniel Lacalle, economist, fund manager and now economic advisor to the Popular Party in Spain. In January, a mass of users of the online forum Reddit organized to buy shares of Gamestop, a video game company that had been reporting losses for years and was heading straight for bankruptcy. In an attempt to prove to Wall Street that the average citizen can, if he wants, disrupt the order of the markets, they bought enough stocks that boosted their price, causing billions of dollars in losses to some funds that had bet on their downfall.

“These types of surprising events are a second derivative of excess liquidity and expansionary monetary policies,” says Lacalle, also an author of books on economics and finance, on the phone from Madrid. “What they lead to is the feeling among minority investors, among small investors, that the market and equities can only go up. Faced with excess liquidity and very low interest rates, it is perceived as having no risk to create a short squeeze, which is the case of Gamestop, although it is not based on a solid position of the company ”.

The same thing happened with a cryptocurrency called Dogecoin, which was originally launched as a kind of joke, but during 2020 it found interested investors such as Elon Musk, who pushed its price to stardom. Bitcoin, the best-established cryptocurrency in the world, traded at levels never seen before in late 2020, driven in part by this search for profit regardless of risk, typical of this moment, says Lacalle. Its rise is particularly important for countries like Argentina and Venezuela, where cryptocurrencies have become an attractive investment to avoid inflation and generate a profit.

Stock markets in Latin America have benefited from this optimistic sentiment, by way of spillover from policies in the US, Europe and Japan. In Mexico, for example, the Price and Quotation Index has already returned close to the pre-pandemic level, despite the fact that the economy last year fell 8.5% and the country is immersed in its worst crisis since the Great Depression. The same is seen in Brazil and Chile, among other countries.

More bonuses than ever

As far as debt bonds are concerned, governments and companies in Latin America have been able to take advantage of the moment to borrow, says Jonathan Fortun, head of statistics and economist of the banking association in Washington, the International Institute of Finance (IIF). In 2020, Latin American countries made a strong comeback on Wall Street, issuing a total of $ 115.2 billion in debt. Together, all emerging markets issued $ 614.4 billion last year, a new record. In January, emissions intensified: in the first 27 days of the year alone, emissions reached 115.23 billion dollars.

“Fund managers begin to see possibilities outside their local market, that is, the American market, and there they begin to say ‘well, let’s put my little money in this bond from a Mexican company or this action from the Brazilian company’, and that is precisely that is the swallow capital that begins to flow ”.

As fast as money comes in, it can go out, and that is one of the big concerns surrounding the sustained monetary policy of the G3, as the three central banks of the US, Europe and Japan are known. In 2013, the Fed declared that it was ready to start disposing of assets it had bought to help the financial system since 2008, when the financial crisis broke out. The mere announcement, without the central bank starting to sell, generated capital outflows from emerging countries. Among the hardest hit currencies was the Brazilian real. This period is known as taper tantrumIn other words, the reaction of investors to the announcement that the monetary authority would gradually decrease its participation in the markets is described as a “tantrum”.

“We are calling it taper tantrum 2.0”, Says Fortun, about the possibility of something similar happening in the near future. “The Fed and the legislators have, in the end, a scale. On the one hand, you are going to have this market intervention, which for them has to be positive because they are keeping the economy alive with this very, very high liquidity line. But on the other hand, they are worried that this line of liquidity will bring bad habits in the markets and create perverse incentives ”.

Something very positive about this policy has been that money has flowed into Latin America, helping countries to restart parts of the economy, says Fortun. “If they get that incentive, you are also going to have a very high impact and there is no absolute formula for how to get it out and there is no perfect time or time to do it.”

“Correction” in the markets

The IMF does not call it the same, but has warned that overvaluations in the market could lead to a “correction” that would generate instability and affect the poorest, says Tobias Adrian, Financial Advisor and Director of Monetary Affairs and Financial Markets of the IMF and author of the text published at the end of last month. “If a correction occurs in the markets, it will hit the weakest ones harder and those are the poorest countries that are already paying more in interest for issuing debt.”

However, for Adrian, a sharp decline in emerging market assets at the time monetary policy changes is not inevitable. 2013 “was more an exception than a rule,” he argues, and what happens will depend a lot on how the monetary authorities communicate their intentions to gradually reduce their market share.

“Having said that, of course, there are also many other reasons that could trigger a sudden outflow of capital,” says Adrian. Markets do not appear to have valued the harm of COVID-19 beyond what vaccines solve, he says. Consumption habits have possibly changed permanently. The vaccine works, but it is possible that there are sequelae on human health that impact long-term production.

Low interest rates, as argued by rich countries, could lead to a spike in inflation, giving central banks little time to slowly and gradually withdraw. “In most countries, even emerging markets, inflation is below target, but at some point that could change,” says Adrian, “therefore the appropriateness of the policy could be very different between countries. , and that will be a challenge ”.

Lacalle agrees and goes further: “The constant increase in the money supply without a real demand for local currency leads to inflation, the impoverishment of the poorest classes and the outflow of capital.” For the specialist, this scenario is looming.

Governments in Latin America have to be prepared with sufficient international reserves in their coffers to face the fluctuations in the exchange rate that will come when developed countries begin to change their monetary policy, says the economist. And not only that, he points out, they must resist the temptation to do the same as the Fed does, increasing the amount of money they issue in their local currencies. “What happens when the Federal Reserve increases the money supply? Many central banks in Latin America say ‘oh, what a good idea, we are going to do the same’. But of course, they increase the money supply in local currency, when the demand for local currency is not only not increasing, but also in many cases is decreasing “

“The tequila crisis in Mexico, the Argentine crisis, we have so many examples from the past,” Lacalle sentenced, “playing at being the Federal Reserve without having the demand for dollars always generates a financial crisis, high inflation and impoverishment.”

Subscribe here to newsletter from EL PAÍS América and receive all the informative keys of the region’s news.