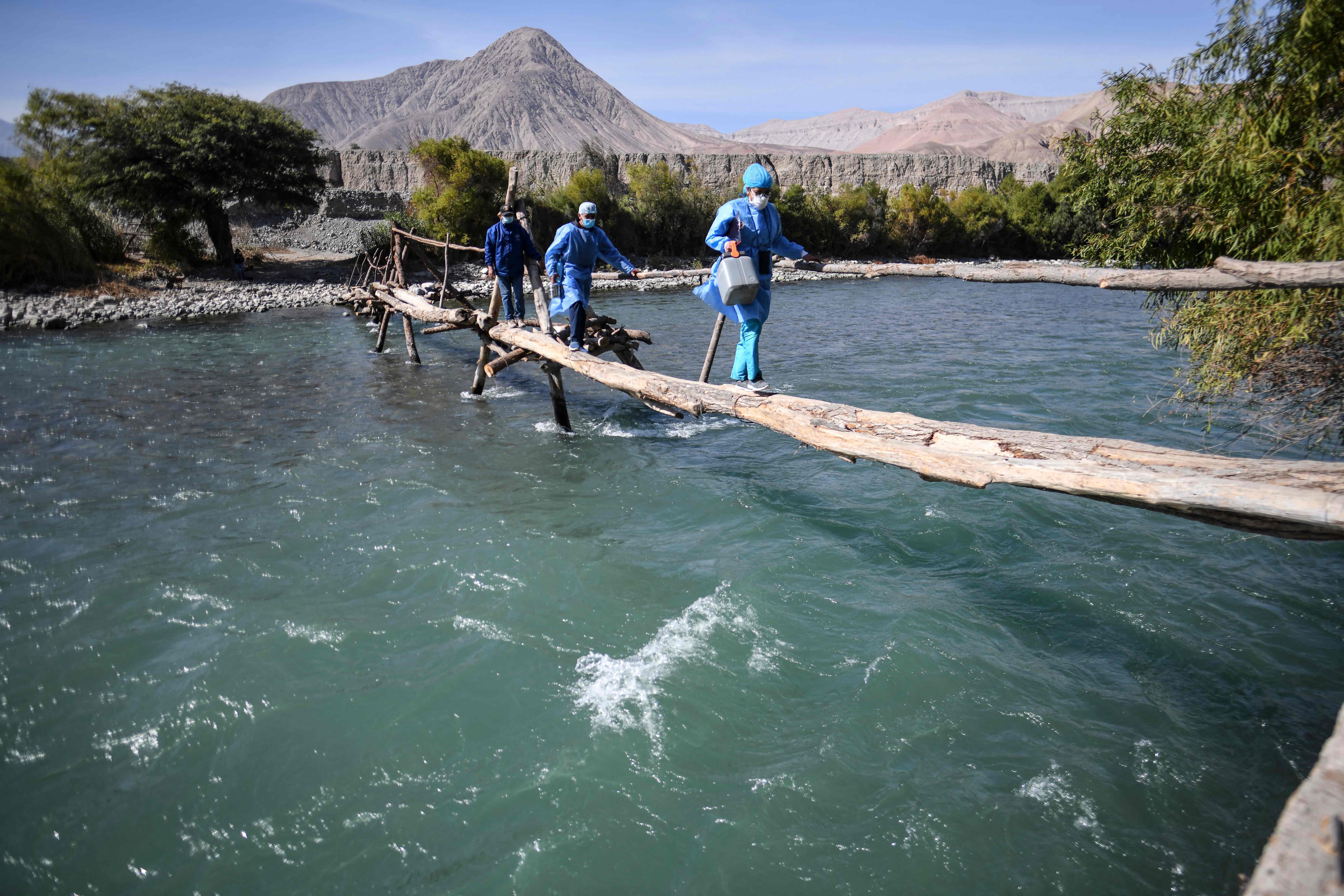 Lambda is already a “variant of interest” to the World Health Organization. This classification is equivalent to putting the lineage probably originated in Peru under cautious but vigilant surveillance: it indicates that, based on the available evidence, C.37 has shown the potential to be more dangerous among humans in at least one of the dimensions of concern about the virus ( mainly, its ability to infect or evade acquired immunity). If it will finally be, and to what extent, remains to be confirmed. But the evidence gathered in the Andean area (Peru, but also Chile or Argentina) are not encouraging.

They are, yes, insufficient to draw strong conclusions. Possibly, the origin and geographic location of lambda has to do with it. The history of lambda is inseparable from its emergence in an environment with relatively low genomic surveillance capacity. Without investment, installed capacity and transparency in the accumulated evidence, it is much slower and more difficult to gauge the danger.

Pablo Tsukayama, coordinator of the Microbial Genetics laboratory at the Cayetano Heredia University in Lima, is part of a team of researchers whose work was crucial to detect, measure and size lambda at first, when it was still known by its code of lineage: C.37. According the latest version of the study that characterizes it (still pending review), lambda accounted for 100% of the virus samples collected in Peru already in April 2020. It is this high presence in the specimens that leads them to hypothesize the Peruvian origin.

Chile and Argentina are the other two countries targeted. “Argentina has reported less than 100 sequences but possibly they have many more”, considers Tsukayama. He clarifies that this has to do with the way in which each sample analyzes the Argentine system. Each country has its own methodology, in many cases constrained by the need for savings or efficiency, or by established practices. In the Peruvian case, for example, Tsukayama himself affirmed that only since April did they receive the necessary funds to produce an analysis such as the one they ended up publishing, and that he brought lambda to light.

The lack of open data does not help either: on June 25, the Peruvian Ministry of Health brought to light its own figure for the percentage of collected lambda samples over the total, standing at 71.1% between January and June. Several voices from science, including those of Tsukayama, then complained about the lack of access to the data behind: “We have asked them to release the data and they have not done so,” he reirer.

But, even so, the compilation work of initiatives such as GISAID or the collaboration between laboratories embodied in outbreak.info they facilitate the relative perimeter of the variants. In this case, the hypothesis of Peruvian origin is reinforced by the notorious presence in neighboring Chile and Argentina, both countries with recent spikes in contagion that they have not been able to fully manage.

The location has more to do with the context than with the intrinsic characteristics of lambda, clarifies Tsukayama, and reports the importance of mobility to explain the contagion. “What we have seen (with the variants) is that they appear and spread in the region.” But this is because there are more movements, “introductions” in epidemiological terminology. “How successful a variant is in a country depends not only on how transmissible it is, but on how many introductions there are.” lambda may have moved nimbly across borders both for its competitive advantage and for the number of people who have moved it from one neighboring country to another.

When it comes to precisely evaluating the higher transmissibility of lambda, Tsukayama considers that “the only evidence, preliminary but I think solid, is its rapid growth”, especially within Peru. “Something that hardly existed at the end of 2020, and that by March is already at 80%, means that it probably has some kind of advantage. It is sown (with the introductions) and it quickly expands ”. This is in all probability what has caught the attention of the WHO, prompting the inclusion of the variant under the group of interest.

However, what is the origin of this advantage, as well as its degree and sustainability, remains an open question. The WHO itself accepts that the evidence is not sufficient to conclude concern, only to point out the aforementioned risk potential.

One of the reasons for doubt is the weight of the environment. When rapid expansions of new variants are observed in specific contexts, perhaps speed has as much or more to do with some characteristics of it. For example: perhaps lambda was able to grow with such agility thanks to the conditions of density and habitability in the cities where it has grown strong. There is no direct evidence to support such a hypothesis, but with the first waves of contagion it was verified in Lima, Buenos Aires, São Paulo or Bogotá that SARS-CoV-2 to some extent follows the paths of overcrowding and the worst living conditions urban. In addition, with other variants, such as the famous and worrying delta, the estimates of increased percentage of contagion have been adjusting downward, although staying above its predecessors, as more data became available to eliminate contextual noise from the signal emitted by figures such as the difference between secondary rates of contagion: how more likely is it that a person carrying SARS-CoV -2 lambda or delta version is transferred to another, compared to one that carries previous variants.

To distinguish between contextual elements and those attributable to the genetics of the virus, researchers, like Tsukayama, continue to work: “We haven’t done those calculations yet, in part because we haven’t collected enough sequences yet. We are in that process. “

“The world has gotten used to quick evidence” on the variants, he adds, noting that this is a good thing, but also determined by the fact that many of them have been presented in situations of high public attention and availability of resources to respond. agilely to the questions that were arising, particularly in the United Kingdom, a country with health systems paired with researchers and institutions without equal on the epidemiological and virological front. Something that until now has not necessarily accompanied lambda, a variant typical of middle or upper-middle income countries.

The other question that occupies all minds about lambda, as about any variant born or unborn, is how effective it is in avoiding the protection with which our immune system is endowed through vaccination. On this, the evidence is even scarcer than on transmissibility. There are only a couple of studies available, both under laboratory conditions.

One, headed by the Chilean virologist Ricardo Soto Rifo, focused on the CoronaVac vaccine, from the Chinese laboratory Sinovac. Observing a group of volunteer health workers, they found that lambda exhibited “increased infectivity and immune escape capacity versus the neutralizing antibodies” promoted by this vaccine. The out-of-laboratory scope of such a relative, never complete loss of protection remains to be seen.

On the other available studyLike the previous one pending scientific peer review, a team from New York University found similar reductions for the Pfizer and Moderna vaccines, which the authors deemed “relatively minor.”

Beyond nuances, and awaiting solid evidence in the real world like the one we already have for the delta variant, what is guessed is a trend with each new variant of minor but gradual deterioration in the protective ability of vaccines. “It is practically impossible to predict how a virus will mutate,” says Tsukayama. But there are some lessons. So far we have not seen a clearly more pathogenic variant. But what does do well for the virus is to become more transmittable. That is why we are seeing gradual advances ”in both transmissibility and immune escape, with the second factor feeding the first.

Robust, advanced genomic surveillance and ex-post evaluation systems are crucial to track these incremental advances. Soto Rifo and his co-authors conclude in their study on antibodies and lambda that “mass vaccination campaigns in countries with high circulation of SARS-CoV-2 must be accompanied by strict surveillance that allows the identification” of significant mutations for immune escape. Now that the WHO has officially identified lambda as a variant of interest, Tsukayama hopes that more laboratories will join in completing the studies necessary to gauge the size of the threat it poses to the South American region, and to the rest of the world’s population.