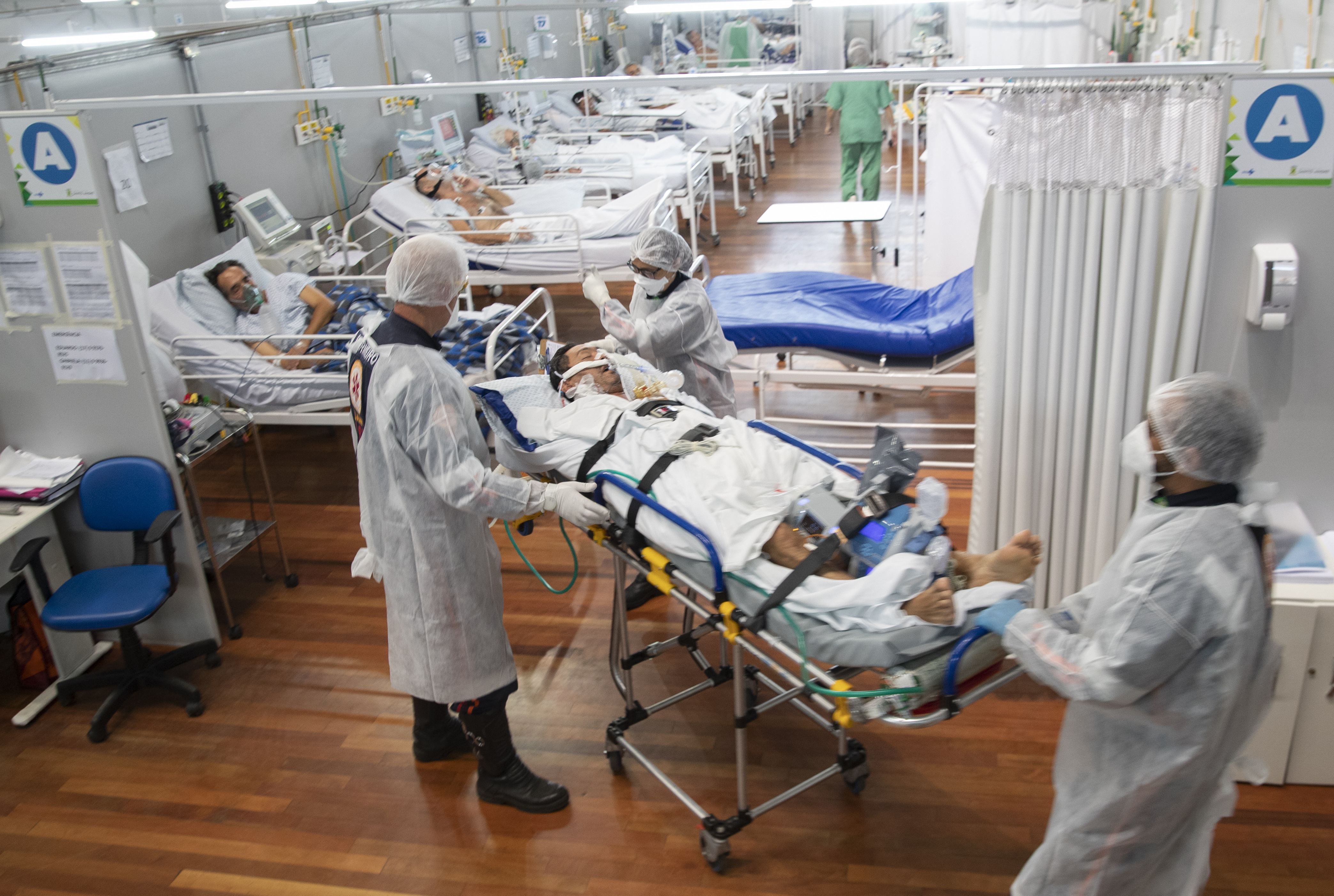 The only good news the Brazilians have received this week is that Pelé has already received the first dose of the coronavirus vaccine; singer Caetano Veloso, too. That and the messages on social networks from grandchildren and children who show so relieved the moment their elders receive the injection are a ray of light in the middle of a gloomy panorama. Because throughout Brazil the virus kills and spreads like never before. No week has been as tough as the last, with 1,910 dead on Wednesday (the record for one day). And the prospect is dire because vaccination progresses slowly.

Cascavel, a city in the State of Paraná, is one of the most dramatic cases that were known last week. A large urban center in a sparsely populated area, it has 99% Intensive Care Units. Consequences? Intubated patients in hospital corridors, ambulances converted into beds … and they even launched an SOS at the local zoo, which lent them nine infusion pumps and a respirator of the kind they use to treat animals, according to the Brazilian press. The crisis is serious not only in cities little known abroad. São Paulo, the richest and most populated city in Latin America, announced on Friday a new field hospital and calls for “volunteers for war.” But, as specialists warn, increasing beds without stopping infections is a temporary fix. State health secretaries fear an “imminent national collapse of the public and private health network” without a national curfew and, in the most affected areas, confinement. Hundreds of sick people need a hospital bed; dozens have died while waiting.

The serious Brazilian situation contrasts with countries that begin to see some light as vaccination advances and cases decrease. The director general of the WHO, Tedros Adhanom Ghebreyesus, has declared “very, very concerned” because of Brazil this Friday in Geneva. It fears that it will lead to an explosion of cases outside its borders as well. “If Brazil doesn’t take it seriously, it will continue to affect the region and beyond,” according to Ghebreyesus.

This fight against a virus that has infected 10 million Brazilians and caused 260,000 deaths in the country has lasted for a year. A battle that is fought here without a unified command, but rather as a guerrilla war – not always coordinated – at the hands of 26 governors and an army of mayors. And with a president, Jair Bolsonaro, hell-bent on sabotaging any effort that places public health as a priority. In a strategy that wears you out less than you might suspect. Every week he displays his contempt for the alarming situation: “Enough complaining, how long are you going to continue crying?” He said hours after the last record of deaths.

Governors and mayors have decreed new curfews and restrictions that are far from the three weeks of national confinement demanded by some scientists. São Paulo will close non-essential activities for two weeks. In Rio de Janeiro there will be restaurants part-time and I veto street vendors on the beaches. Eighty cities of Minas Gerais are confined. The soccer league continues although without an audience.

The fourth wave of infections is being the most virulent. It began to take shape around New Year’s Eve, at the end of last year. The cases began to increase and since then the trend has accelerated. That increase, together with other factors, has set a ticking time bomb.

The transmission rate has been high for a long time and the virus circulates uncontrollably, thus facilitating mutations such as the Brazilian variant P1 and increasing the risk of new strains. There are many families in which several generations live crowded together in a tiny space. Since the payment of the coronavirus ended in January, millions of people have taken to the streets to earn a living, the medical staff is exhausted, misinformation abounds … And all this aggravated by politicization. The management of the pandemic is a political battlefield from day one. The president, in addition to proclaiming that he does not intend to decree a confinement or get vaccinated (his mother was immunized), causes crowds every week, blames governors and mayors for the economic damage, has changed health minister three times and sows doubts about efficacy of vaccines and masks while spending staff and public money to manufacture drugs whose efficacy against COVID-19 has not been demonstrated.

The biologist and science communicator Atila Iamarino maintains, in statements to BBC Brazil, that there is “a genocidal strategy for people to move freely and develop (collective) immunity. It is not by chance that one of the most dangerous variants arose here ”.

“The people still believe that this is a joke. Until people don’t touch it, they don’t understand how serious it is, ”Luciana Trinidade, 45, who sells panettone in an underground corridor in Luz, a central subway station in São Paulo, complained this Friday. You know what you’re talking about because the virus grabbed your family. “My 23-year-old son had sequelae. He attacked his spinal cord, lost mobility in his legs, had a thrombosis and almost died. Now he is recovering, ”he explains as a tide of travelers transshipment at a brisk pace. He emphasizes that the young Trinidade does not go to parties, but, like so many Brazilians, he is obese and hypertensive.

“I don’t take off my mask, I don’t stop using disinfectant gel, and as soon as I get home, I take off my clothes and take a shower,” emphasizes the saleswoman, who spent 40 days without smelling. But taking precautions does not allay their concern: “Now they say that you can get infected again. And here I am, in the middle of this crowd ”.

The pandemic also provides anecdotes such as the one caused by an official of the Ministry of Health who got confused or the alphabet is not known. He sent 78,000 vaccines to the State of Amapá that corresponded to neighboring Amazonas, where he sent the 2,000 that Amapá expected.

There are other problems beyond incompetence or sabotage. Even in São Paulo, where the authorities have shown political will to fight the epidemic, the distance between the rules and their application is wide. Almost 8,500 people were warned by the authorities of this city of 12 million inhabitants because of the mask, according to Know it, an agency informative specialized in transparency. Not a single one was fined.