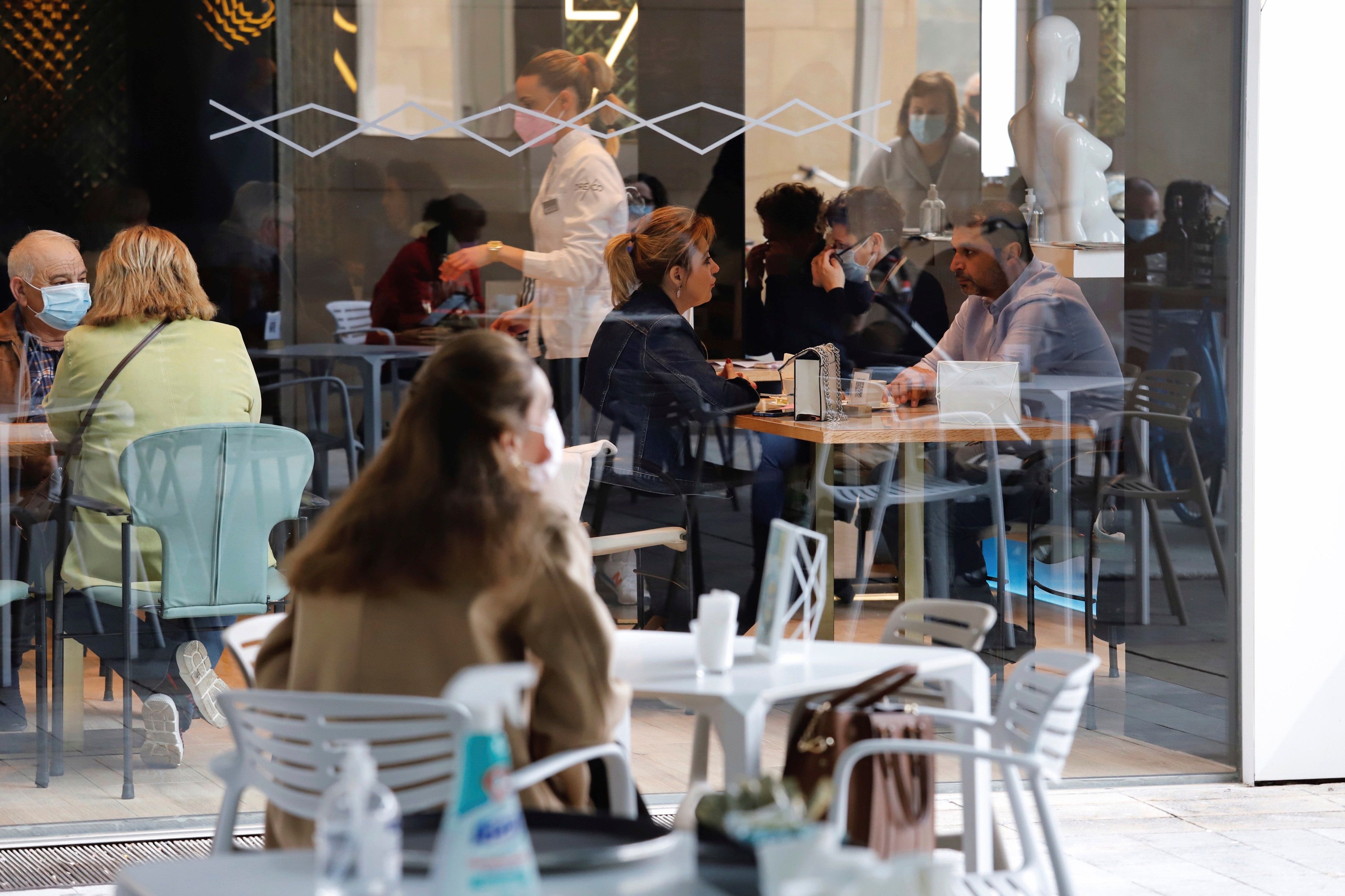 The Madrid Minister of Economy, Manuel Jiménez, said a month ago in EL PAÍS, about the closure of the hotel business: “I can say that there is no scientific evidence that it is useful.” Two days later, in the Basque Country, the Superior Court of Justice overthrew the intention of his Government to close it: “It does not appear at this time as a certain and serious risk element for public health.” One year after the pandemic broke out in Europe, what does hospitality science and covid know?

The European Center for Disease Control rates bars and restaurants as settings for “high risk” and proposes its closure among the severe measures to deal with the most contagious variants of the virus (PDF). All European countries have operated in these establishments throughout the pandemic. And the sector has responded with protests and complaints. In November, when the Cantabrian Health raised the closure, the hotel industry responded that if they were the problem, “the hospitals would be full of waiters.” The then general director of Public Health in Cantabria, Paloma Navas, answered with a piece of information: at that time it was the sector with the lowest work sickness due to covid in all autonomy, 844 in two months.

A study of the United Kingdom Public Health determined that hospitality workers are the professional group with the highest risk of infection, only behind social health personnel. In the same way, a job The Norwegian Institute of Public Health showed that the infection rate among waiters was twice that in other professions at the time when restrictions were imposed on the sale of alcohol to curb infections and, after three weeks, the level was the same than the rest. “In this pandemic the level of uncertainty is high, we must act with great humility because there are no great truths. But we have some data, ”Navas now points out.

Norwegians restricted access to alcohol because it clouds good intentions to comply with the measures. In Scotland, researchers tracked the rules imposed in bars and found that all efforts were diluted when the key element came into play: drunk patrons. His study reports how they repeatedly yelled at, hugged or closely interacted with other customers and staff. “We concluded that, despite the efforts of the bar managers, potentially significant transmission risks persisted”, explained the main author of the work, Niamh Fitzgerald.

“These are things that sometimes escape the control of the owners. Many have adapted, but still pose a risk in some circumstances “

That is an important key: it is not the site, it is what happens inside. In a haberdashery much smaller than a bar, customers do not remove their masks, do not spend long periods with other strangers, do not speak out, emitting contagious particles in poorly ventilated environments. “These are things that sometimes escape the control of the owners of the premises,” says epidemiologist Quique Bassat, from ISGlobal in Barcelona. When hygiene was thought to be more decisive, he explains, they had more to contribute. “Many have adapted, but they continue to pose an unacceptable risk in some circumstances,” he laments.

That sums up another of the false dilemmas that have been experienced in managing the pandemic. It is not black or white, restaurants yes or no. Navas affirms that the hospitality industry “has never closed tightly” in Cantabria. The interiors yes, but the terraces were always open, where the risk is much lower. “And we never had a serious rebound like in the Basque Country or Asturias,” he adds. To make this decision, Navas looked at the New York plan, which had an exemplary summer by closing all the interior stores and taking all the activity to the streets.

“It is not a contagion factor and restricting its activity does not reduce the evolution of the pandemic,” says the business confederation of hoteliers

For its part, the hospitality industry insists that the evolution of infections in the different autonomous communities is very similar regardless of the closure or opening of bars and restaurants. “It is not a contagion factor and restricting its activity does not reduce the evolution of the pandemic”, assures the business confederation. And he adds: “It is the case that some communities that have not adopted closure measures have more encouraging figures. These numbers reinforce the hypothesis, even, that the total closure of the hotel industry could favor social gatherings in homes, spaces with a much higher risk of contagion ”.

Magazine Nature published in November a study, based on the movement of the phones of 100 million Americans, which warned of the role of the hospitality industry in infections. Restaurants are, according to this study, the most dangerous places, up to three or four times more than the following most exposed categories: gyms, bars and hotels. They gave an example: fully reopening Chicago restaurants would cause an additional 600,000 infections in a couple of months. The authors bet on tackling the problem, but not on a total closure: drastically reducing capacity would allow a balance.

In the UK, “eating out was the most frequently reported activity in the 2 to 7 days prior to symptom onset [entre los contagiados]”

To act in the hospitality industry, Navas also relied on another study much mentioned, carried out in the US with the endorsement of its Centers for Disease Control and Prevention (CDC). After investigating more than 300 infected, it was observed that they were twice as likely to have dined at a local in the previous days compared to a control group of people who had not been infected. When the Pasteur Institute carried out a similar job, the proportion of recent hospitality visits among positives was almost double that of the rest. And in the UK, according to a report Government: “Eating out was the activity most frequently reported in the 2 to 7 days prior to the onset of symptoms [entre los positivos]”. A first internal analysis of Cantabria shows that those infected had 3.7 times more possibilities having gone to bars and restaurants in the previous days.

Bassat explains: “By common sense, from what we know about how this virus is transmitted, we intuit that it has an important role because it is where it is most complex to maintain protection measures, although there is not much solid data because the methodology to link the cases is not easy”. A study A recent, still preliminary, carried out by several American universities that followed more than 6,700 people, indicates the most favorable conditions for infections. Most notable, as in many other studies, is the level of overcrowding in the coexistence. But outside the home, scientists emphasize that health policies should focus on dining inside a restaurant or bar, attending a place of worship, not wearing a mask when shopping, going to a gym or visiting people in their houses.

In Scotland and the United States, it has been observed that the infection rate shoots up just three weeks after opening bars and restaurants

But do the closures influence the evolution of the pandemic? Thousands of elements are involved in a pandemic and it is extremely difficult to link a single factor to its evolution, especially when many measures are taken together at the same time. The Scottish Government notes, in a report, that three weeks after the hotel business opened, the reproductive rate of the epidemic rose beyond control. An analysis of data carried out by The Washington Post showed that the infection rate in different states doubled just three weeks after opening bars and restaurants.

Already in may Was published that the closure of bars, restaurants and gyms “resulted in significant reductions in the growth rate of COVID-19 cases in all periods after implementation” in the US. Science just published a study based on the decisions of 41 countries that considers that the closures of “businesses with a high risk of infection, such as bars, restaurants and nightclubs” were effective and “may be a promising option in some circumstances”, although not as much as other measures more drastic such as the suspension of the entire educational system or the prohibition of all social gatherings. In the magazine Nature Human BehaviourAfter analyzing 6,000 measurements in 79 territories, the scientists concluded that the greatest impact on the rate of contagion is the cancellation of situations that allow small-scale social encounters: “Closings of shops, restaurants, meetings of 50 people or less, work compulsory home delivery, etc. ”.

Furthermore, as Bassat points out, the hospitality industry has an added problem: “The contagion rate among non-cohabitants increases.” In these places, unlike in schools, for example, more infections can occur between people from different backgrounds and difficult to trace. And what is worse, in a pandemic that progresses thanks to super contagious events: the number of infected in each outbreak of the hospitality industry is very high. According to Health data (PDF), in outbreaks that occur in family gatherings, an average of six people are infected. In restaurants and bars, 14 infected per outbreak are generated. In discos and pubs, each outbreak causes 26 infected.