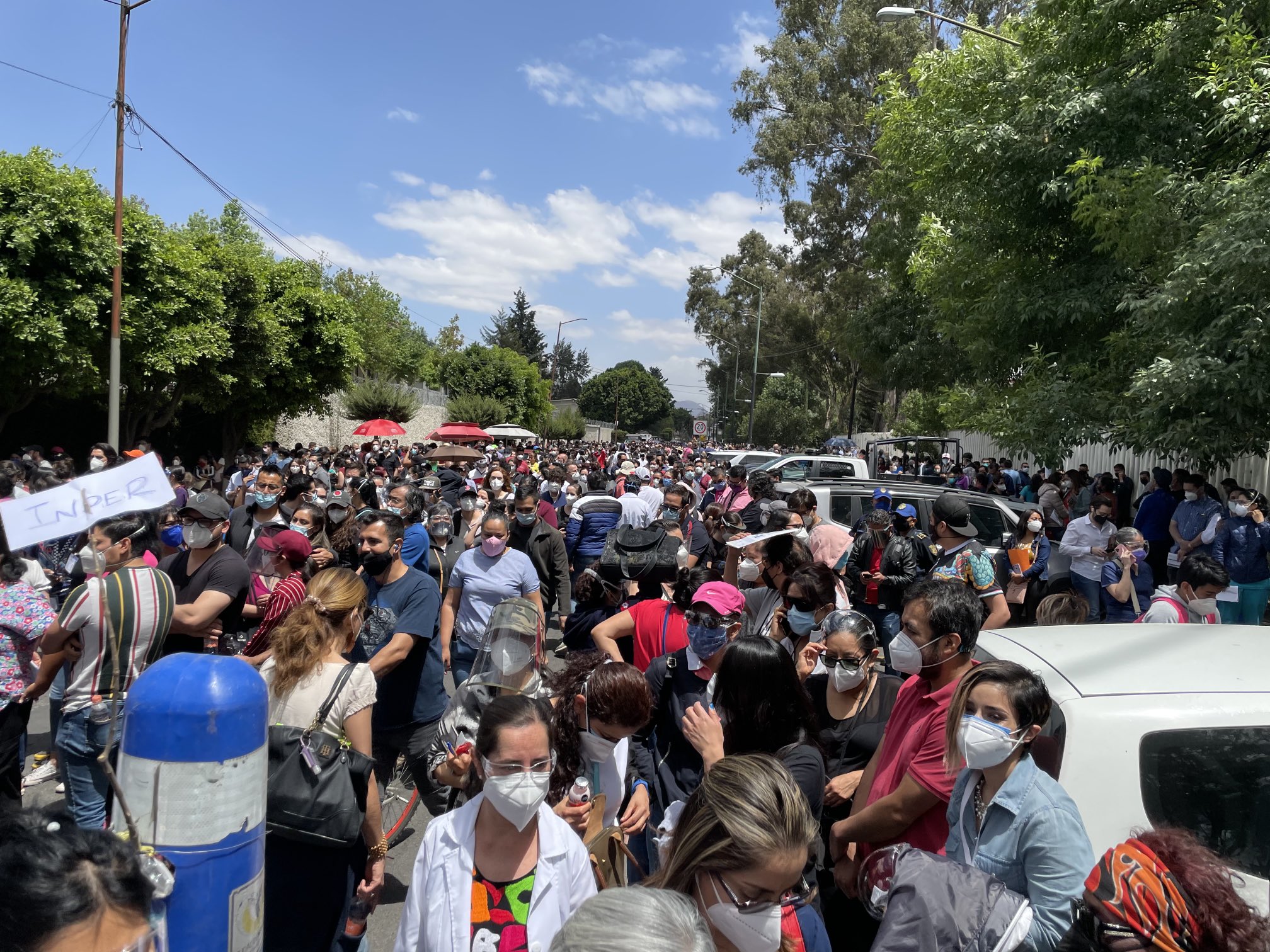 Tired of waiting and with the wear and tear of more than a year of pandemic on their backs, thousands of Mexican doctors claim that the Government has not taken them into account to be vaccinated. They work in private centers or consultations, as well as in thousands of pharmacies, but in most cases they have been left out of the national vaccination campaign because they are not considered personnel in the first line of care against covid, despite who have been in contact with coronavirus patients, or because they do not work in public institutions. The protests took place this week in the northern state of Chihuahua and in the country’s capital, which at the end of last year had the highest number of health worker deaths due to the pandemic in the world, according to Amnesty International.

Dr. Cecilia Hernández left the office as soon as she received a WhatsApp message with news that she has waited for months. “Vaccination to the health sector, including private hospital personnel. Spread the word, ”read one of the publications that spread like wildfire on Thursday among chats and groups of health workers. By noon, hundreds of them had already arrived at the Naval Medical School, south of Mexico City, to receive a dose. There were also personnel from the public sector, the military, acquaintances and relatives who approached with the same objective. “It was chaos, there were an impressive amount of people,” says Hernández. The long lines, the complaints, the complaints on social networks and the blocking of streets to demand that they be taken into account in the vaccination did not work. Some colleagues were lucky, but most left empty-handed. “We feel humiliated: the government has turned its back on us,” claims oncologist Christian Camacho.

The authorities of the capital, the area most affected by the pandemic and the one that probably has the best inoculation strategy in the country, said in a statement that the disorganization arose because the call was false and that all the health personnel in the first line of attention to the covid of the public and private sectors had already been vaccinated. Despite the confusion, some 500 health workers from private centers were able to be immunized, according to the local health ministry.

The problem runs deeper. Among health personnel, hundreds of thousands do not know if or when they will be vaccinated. The Government announced last January that the health sector would be the priority group and estimated at 1.1 million employees in the first line of care against the coronavirus. They were to receive the vaccine between December and February and about another million toilets would be applied before the end of April.

Also Read  Earthquake in Haiti: the story of survivors of the magnitude 7.2 earthquake that relived the trauma of 2010

As in the rest of the world, the first quarter of the year started with the hope of the arrival of the vaccine, but optimism was fading due to the unforeseen, the shortage of doses and progress in coverage much slower than expected. The National Vaccination Plan fell short and none of the forecasts made by the Government were fulfilled: neither the deadlines, nor the doses received, nor the immunized people. By the end of March, for example, it was expected to have more than seven million doses of the Russian biological Sputnik V, but only 900,000 have arrived. The same happened with Pfizer, the local packaging of the drug from AstraZeneca and what was expected to distribute from CanSino. And the authorities had to knock on other doors: around half of the vaccines that are available have been obtained through deals with the Chinese laboratory Sinovac, which were not in the initial calculation, and loans like the one made by the United States or contracts that They were not contemplated like the one signed with the Serum Institute of India to cover the AstraZeneca dose shortage.

To date, Mexico has vaccinated more than 661,000 health workers, the majority from the public sector. In mid-February, the health authorities decided to begin mass vaccination of the population over 60 years of age to save as many lives as possible. But as the pace has accelerated and people vaccinated now number in the millions, immunization for health personnel has stagnated and workers, especially in the private sector, claim that they have been left in limbo. In private hospitals they assure that barely 50% of their personnel have been immunized. Meanwhile, there are about six million vaccines in the country that are available and have not been applied.

The president, Andrés Manuel López Obrador, and Hugo López-Gatell, the Mexican spokesman for the pandemic, have asked for patience and insisted that everyone receive the vaccine. Two weeks ago, López-Gatell justified that there had been no progress in inoculations to members of the private sector because there is no medical census and criticized that the lists they received were often “inflated”. The bottom line is that Mexico – a country in which more vaccines are needed than are available – does not know how many doctors, nurses and auxiliary workers there are in the country, despite the promise that they would be the first to be vaccinated. While looking for a solution against the clock to a statistical gap that has existed for decades, vaccination of private individuals is virtually at a standstill.

Private doctors are not just those who work in hospitals. Around 18,000 pharmacies have attached offices where a couple of doctors work for two shifts. Those are also waiting for their vaccines and claiming the first line against the covid, because people who feel bad go to them before any other place, especially those who have less money. Many of these doctors have not received training against covid, their protection in the consultation is precarious and their working conditions much more, some denounce. In addition, there are thousands of other university graduates who have been unable to work in the exhausting public services, despite the manifest need for staff for decades, and have set up their own neighborhood consultations. They have not been vaccinated either, and some have fallen ill. “A large number of doctors have died,” the coordinator of the UNAM Health Research program, Samuel Ponce de León, recently told this newspaper. “What we see in hospitals is just the tip of the iceberg,” he said.

Gustavo Celis is lucky, he does a residency in a hospital and works with covid patients, which has provided him with training to protect himself and has been vaccinated. But his private practice, in the Magdalena neighborhood (State of Mexico), was closed from March to June of last year. Reopened, continue to see covid patients. “Saying first-line doctors is very ambiguous. There are many generals, with specialties or with private practices that have been infected when receiving patients who did not know they had covid, most of them with face masks that do not have any protective effect, “he says. “I think there is a lack of equity [por parte del Gobierno] in the protection of doctors ”, he laments. “It is differentiating between the institutionalized and the private, which do not enter the official records,” he says.

Dr. Cecilia Hernández, who worked as the medical director of a hospital, says that private centers have been asked to draw up their own lists of front-line personnel. It may seem trivial, he explains, but due to the very nature of the disease, the division between those who care for coronavirus patients and those who do not is so clear. She is an allergy specialist and just last week she received four people with covid because the discomforts are similar in some cases, such as red eyes and rashes. Gastroenterologists, he says, have referred patients with stomach discomfort, also present in some manifestations. There are also orderlies, administration workers, security guards and nurses in constant contact with covid patients, but who are not strictly considered in the first line. The internist Hernández, who in her office wears surgical pajamas, double masks, protective glasses and has entered the ICU to monitor her patients with covid, is not included either. Casual workers, who are not on the payroll, have also been left out.

“We have seen many colleagues die,” says Hernández, who began receiving coronavirus patients since March last year. For many of the president’s most assiduous followers, private centers, inaccessible due to their high costs for the majority of the population, must scratch with their own nails. The doctor responds that after the pandemic forced the public health system to turn to covid care, private hospitals have served as an escape valve to care for people with other ailments. “It is a huge frustration, because if the hospitals themselves and the people who work in them do not consider us, we can become a risk factor for the rest of the population,” he says. Camacho also claims the artificial division between the public and private sectors, when “the virus does not discriminate because of that, but the Government does.”

As the complaints become more and more common, some members of the private sector have threatened a general strike to press for a response from the authorities. The alternative is remote, but it confronts several aggrieved doctors with ethical questions. “I would not do it, the lives of my patients would be at risk”, Hernández ditch. National associations have also pushed for progress in the coverage of medical personnel and tens of thousands of doctors, nurses and other workers have launched a call to gather their own registry of affected: only a fraction of the public and private sector employees who have not received the dose.