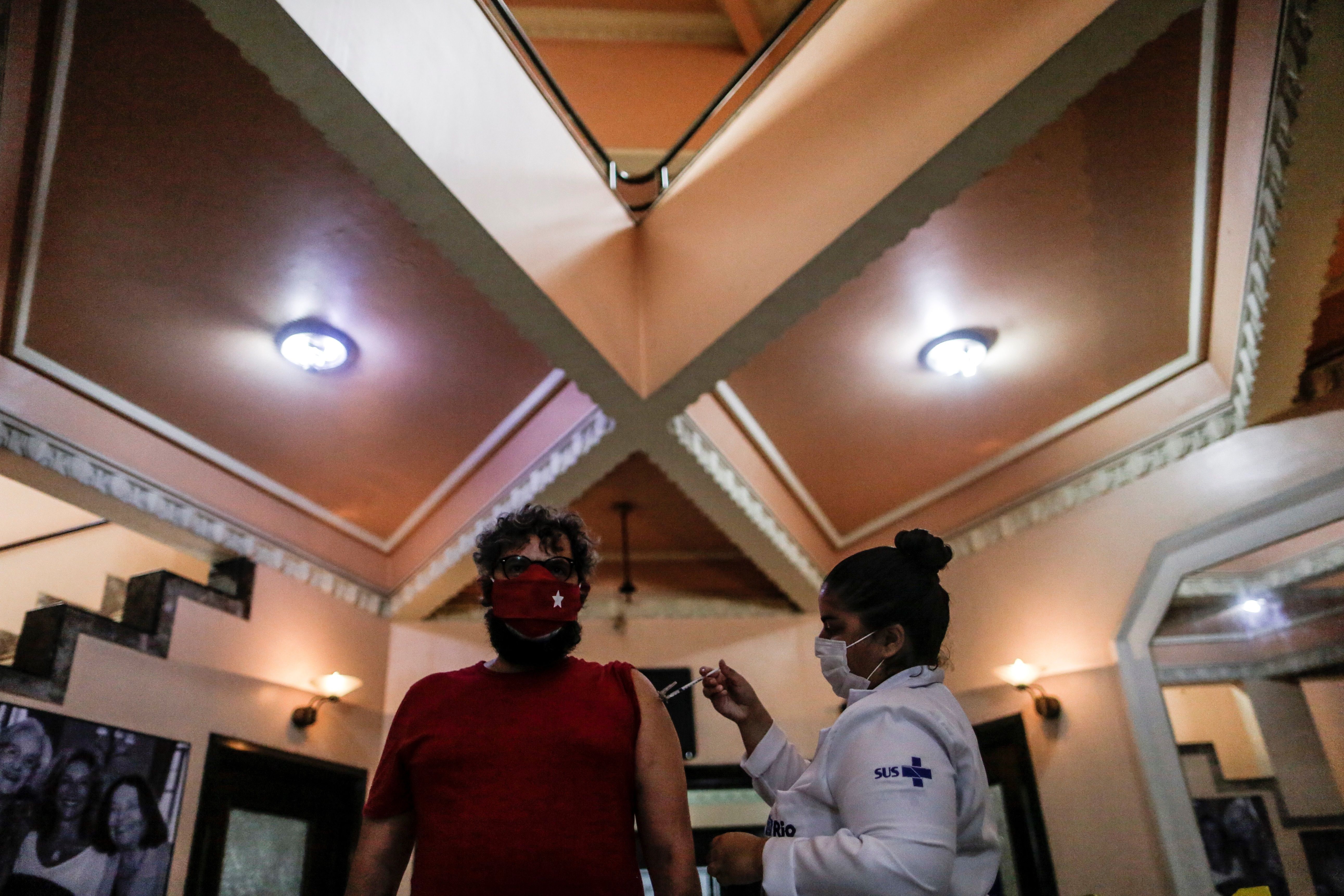 Despite the fact that the rate of vaccination has accelerated in Latin America in recent weeks, almost seven months after the first vaccine was launched on the continent, the degree of population immunization is still insufficient: less than one in five of its inhabitants have access to the complete regimen, and the partial protection provided by a single dose in double vial schemes (something common to all those used in the world except that of the American laboratory Janssen) reaches less than a third. The complexity of maintaining vaccination programs that are both ambitious and urgent over time that require double dosing is becoming evident now more than ever in a region characterized by unequal access and presence of public services.

Meanwhile, providers are not keeping as constant as their customers would like. Gamaleya, the Russian laboratory that produces Sputnik V, has been running into delays since January: in Argentina, component shipments are postponed and production by local laboratories has barely been able to get off the ground; in Guatemala they are considering requesting a refund of the full amount that the country disbursed to acquire eight million doses, of which they have not received even 5%. Last week, the Secretary of Health of Bogotá warned of the lack of doses of Pfizer to complete vaccination guidelines already started, although he expected to receive them shortly. Previously, Sinovac had delayed the vaccination takeoff in May due to unexpectedly late deliveries in April.

The spikes of contagion that do not stop (fueled by variants such as Delta or Lambda, and other mutations threaten on the horizon) raise the question of whether it would not be appropriate to make adjustments to the vaccination strategy of Latin American countries. This question unfolds in turn into two different dilemmas: the decision between using the available doses to fully protect people who already have the first one or to maximize the number of individuals who have at least something with which to defend themselves; and the (still uncertain) possibility of combining vaccines from different laboratories for the second dose as they arrive.

Argentina and Brazil multiply by 3 and by 1.5 respectively the number of people with a single dose versus those that have the pattern completed. Both are implementing a strategy that prioritizes partial protection. The same can be seen in the data for Costa Rica, Bolivia and Ecuador. On the contrary, the proportion of people with both doses over the total is higher in Peru or Colombia. These differences can be affected not only by explicit decisions of what to do with the doses that are arriving, but also with the deadlines established for the vaccines used. AstraZeneca requires twelve weeks, while Sinovac is four. Pfizer is three or twelve depending on the place, obeying these variations also, in part, to prioritization decisions. Colombia, for example, recently extended the US-German vial to those three months, with the explicit intention of improving its effectiveness and the implicit effect of prioritizing partial immunizations.

Also Read  They accuse Despierta América of not saying anything: they are branded as showing Alejandra Espinoza's health

The UK was a pioneer in the West by implementing this strategy from the start. He did it in a phase of difficult contagion, hoping that partial protection would save more lives than ensuring total. Some statistical models published later support the strategy, but for the accounts to come out, this partial first-dose protection must be high. One of these estimates, published in the British Medical Journal, calibrated considerable reductions in mortality rates: one in ten lives saved compared to a strategy of completing second doses as soon as possible. But the fine print is crucial in these calculations: the advantage of the strategy disappeared completely when the effectiveness of the vaccine was reduced to 70%.

Effectivities above 70% for a single dose is something that we only saw clearly with the mRNA-based options (Pfizer, Moderna) and at the beginning of those measurements: with the first waves of vaccination in the US and Israel. Recent data from the United Kingdom collecting effectiveness of Pfizer and AstraZeneca against the delta variant, for example, draw a scenario of a considerable gap in the protection between the first and second doses against the mutation: from 49% to 89% in the first; from 35% to 79% in the second.

We do not know the equivalent of these values ​​for CoronaVac or Sputnik V, two of the most used in Argentina, Brazil and other countries on the continent. But these data imply a substantial modification regarding the effectiveness of a single dose before the advent of delta, which explains the prudence that guides the reconsideration of some countries, which until now followed a prioritization of first over second doses, and today are reconsidering your approach. In the UK, in fact, it is emerging hypothesis (unproven) whether this partial vaccination did not provide an incentive to settle in delta, in its attempt to penetrate an immunological wall more affordable than that produced by the double dose.

Also Read  UN: UN Says Taliban's Treatment of Women and Girls Will Be a "Red Line" in Afghanistan | International

Rather than confirm or disprove this hypothesis, the exercise is useful to understand the public policy dilemma: although at first it may seem better to provide some protection to many people than many at a time, it is not immediately obvious what leaves more space for the virus to keep playing.

A possible way out of this dilemma could be to combine vaccines according to availability criteria. This type of strategy was initially considered in Europe after discovering the rare cases of clots among women under 50 years of age with AstraZeneca. That is why most of the data we have refers to this vaccine, although now it draws attention among Latin American countries due to the flexibility it would provide to deal with delivery problems, or even (and this is, for now, barely Informed speculation) the possible complementarity in immune reinforcement, especially interesting given the settlement of more effective variants in contagion.

The information collected on combinatorics is positive, but preliminary. The CombiVacS study, conducted in May by researchers from the Health Institute of the Carlos III University of Madrid, showed that the administration of a second dose of Pfizer between 8 and 12 weeks after a first of AstraZeneca produced a significant immune response. Similar studies emerged in Germany shortly after: one, among health personnel from Berlin, found that the immune response was produced and perhaps it was even better than the combination of double Pfizer with 3 weeks of term. Another, at the University of Saarland, found this reaction to be better than two doses of AstraZeneca, and at least as good as two doses of Pfizer. At the end of june, the UK Com-COV study joined the chorus to add that the immune response was good regardless of the order of the combination. In this same study, it was found that perhaps the combination increased the probability of suffering mild side effects: fever, fatigue common after any vaccine, not only due to covid, which indicate activation of the immune system. But this is not something that particularly worries scientists or doctors.

Other studies are advancing: in Moscow they are measuring the combination of Sputnik V with that of AstraZeneca; in the Philippines, both Pfizer, Moderna, J&J and Covaxin combined with Coronavac (from Sinovac); In the US and the UK, the same teams that have already published results are testing other mixes. Meanwhile, countries as significant in the global vaccination process as Germany, France, Spain, Italy, Canada or the United Kingdom itself already practice combinatorics.

Also Read  Covid has made us use even more plastic, but we can restart | Christian dunn

This consensus, thus presented, may seem definitive, but the studies must be dimensioned and interpreted before turning them into public policy. Only two of them (the Spanish and the British) meet the requirements of a clinical trial with a control group and a treatment group in order to establish causal differences between vaccination regimens, not only observed ones. But even these were not applied to more than a few hundred people, and solely to observe the reaction of the immune system. That is to say: this evidence is comparable to that obtained in phase two studies that all approved vaccines had to pass, but not phase three, the definitive ones to verify the efficacy of said immune reaction in preventing infections. So far we have observed that the mechanisms that we want to produce are being activated with these vaccine combinations, and that there are no serious side effects that occur frequently, but we have not subjected them to a strict test against the virus that involves thousands of people, as we did with the approved vaccination regimens.

Caution, once again, is imposed again in an uncertain scenario. One that the evidence can help illuminate, but without offering an incontrovertible guide for decision making. This week, for example, a court in the Colombian Cartagena de Indias reversed the 12-week delay imposed by the Colombian government for the second dose of Pfizer among newly vaccinated, requiring the corresponding health provider entity to vaccinate the plaintiff who demanded a compliance with the original times of 21 days. The ruling stated that there was no “scientific support” for the new policy, using science as a shield without cracks from the judicial decision. However, the multiple evidences show that both in terms and in mixtures science is more a conversation than a series of established maxims, making it difficult to displace responsibilities that, constitutionally, would correspond to the public powers.