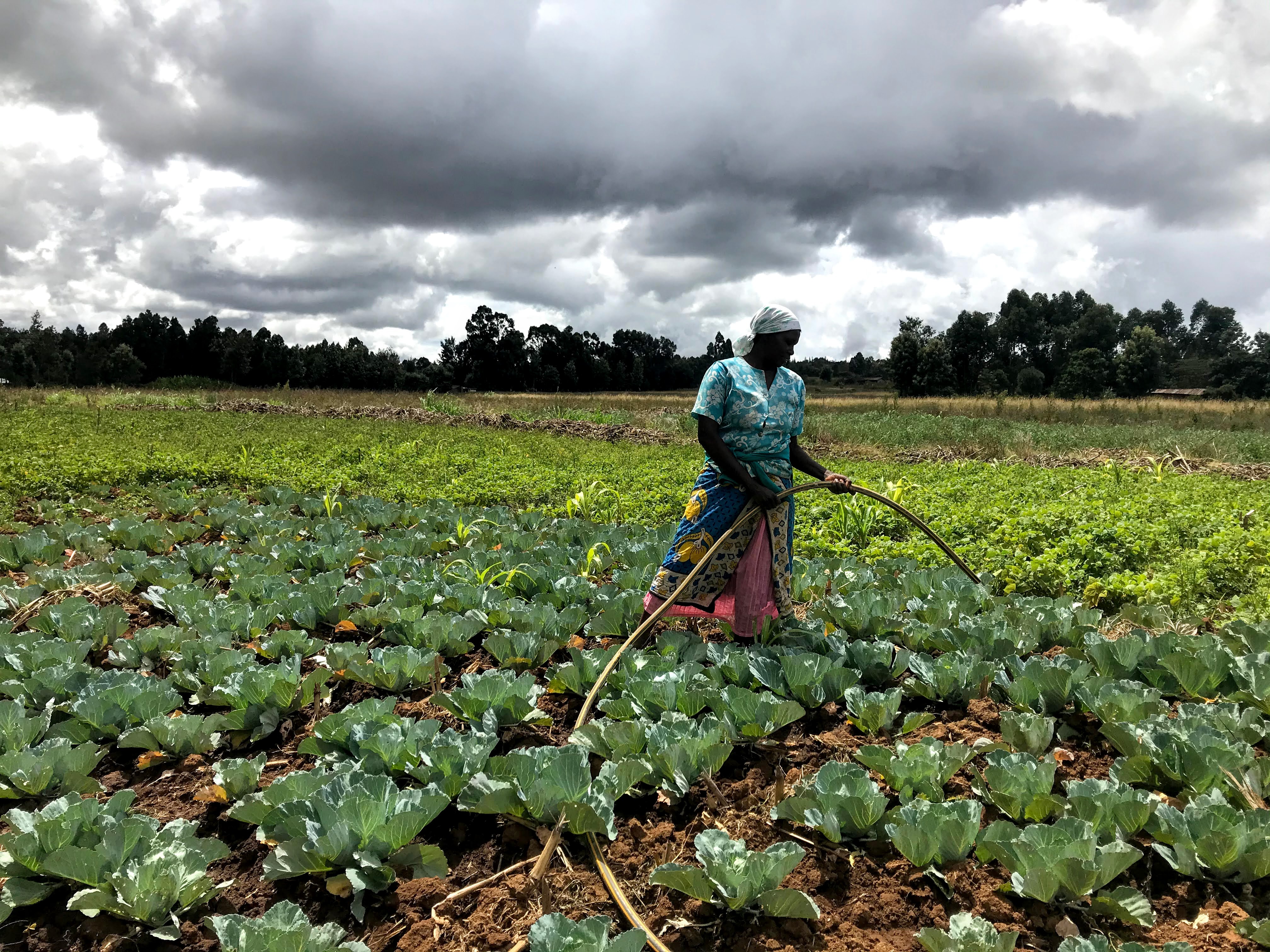 The year 2020 was difficult for the world. In rural Kenya, with the oldest population and the fewest resources, it was important for everyone to keep COVID-19 under control. The lockdowns in the main cities worked almost perfectly so that the pathogen did not reach the countryside, but now, with the policy of opening, the schools back in operation and the vaccines ordered, the rural population is more optimistic. “I would like to be vaccinated, and I hope it is free. If not, I will have to prepare for the expense for my family, ”insists Mary Wanjiru, a single mother of three children from Lobere, a town in Laikipia County.

Wanjiru heard about the vaccine on the news, but they didn’t give much information. “If they gave it, I didn’t hear it. When will it arrive? Who will they put it on first? Are there plans to immunize? ”He asks. According to this woman, her town has not suffered the effects of covid-19. “Lobere is densely inhabited, and most of the people are always on their land. That is why one can spend an hour walking around here and not meet anyone on the street. I know everyone and I don’t know of anyone who has been infected, or who has been affected by the disease ”.

Laikipia County has a total population of 518,560 inhabitants and 149,271 households with an average of 3.4 persons per household; the population density is 54 inhabitants per square kilometer. Wanjiru explains that the Government has taken precautionary measures, such as the use of a mask and hand washing, very seriously. Kenyans avoid contact and most families have chosen to purchase washing facilities. “In all offers to work in the field, the mask is mandatory, especially if the employees are more than five,” he says. “When I’m near the center of town, I always wear a mask; it’s full of people, everyone blows their breath at everyone, so I don’t take it off. I also wear it when I go to church. In the village, we all protect ourselves, but the police are also there to ensure that we respect the obligation to carry it and the curfew ”.

In addition, an advantage for the population is that there are no occasional visitors. “We don’t travel a lot,” says Wanjiru, who claims to be very careful with people coming from big cities, especially Nairobi. “In the next town I have heard of young people who have been brought back from the city to bury them because of covid-19, so every day I pray that the children of our neighbors who are in the cities are safe. Anyway, we also hope that they stay there and do not bring the virus, “he confesses.

Now that the schools are reopening, Wanjiru thinks it will be a big problem for Lobere. “The reopening of the schools means a lot of movement, as parents take their children to different centers throughout Kenya. The mass displacements in public vehicles could bring the first cases of covid to the town, but we trust that those who take their children will be especially careful ”.

Wanjiru hopes the government has taken sufficient precautions to keep the children safe, or vaccinate them first. “I wish the children would study in their villages to avoid too many trips to another county. I wanted to visit my parents during the New Years holidays, but decided not to, as I would have had to use public transport, and at that time of year everyone travels. I am not going to endanger the health of my family by getting sick myself ”. Finally, he adds that he trusts that the country will continue to strictly comply with preventive measures to stop the spread of the disease while waiting for vaccines.

When the coronavirus knocks on your door

Charles Kariuki, a retired teacher and businessman from the town of Mwenje, also in Laikipia county, tells how much his nerves suffered when his youngest daughter contracted COVID-19. “It was November, and I didn’t want us to worry. He waited until he was out of danger to tell us. His illness was mild and he did not need hospitalization, but he continued to cough for at least two months later ”.

Kariuki recalls that when the first cases were reported in Kenya and the lockdowns were announced, he asked his daughter to leave Nairobi and return to the village. “I have three other children, but they are older,” he says. “I was worried that my daughter would catch it, and she did, but I’m not sure how. I am thankful that it is well ”.

According to the businessman, a friend of his from a nearby town also contracted covid-19, and was hospitalized for several weeks. “He was in the hospital twice for respiratory problems. He suspects that he caught it from the Nairobi construction workers who worked with him. I know that it is normal for many villagers to distrust outsiders from big cities, but I am not suspicious because my children and my grandchildren live in them. I would be very angry if they felt marginalized or rejected here ”.

Kariuki takes the necessary precautions to protect himself. “I always wear the mask and I constantly disinfect myself. All houses have a washing facility. I have one in the store. In the church, in the center of the city and in the fields where many people work there are also there. I am looking forward to the vaccine reaching our country. I know the world will heal. I hope we don’t lose too many people. “

Lucy Mwara, a casual worker from the town of Matwiku in Laikipia County, remembers the first time she heard that a Kenyan had caught COVID-19. “I got really scared and called several friends to watch the news. I thought that in December we would all be dead. I was very scared, but the new year has arrived and here we are. We have lost some Kenyans, but things are going better than expected. “

When schools closed, she felt calmer and made her two teenage sons confine themselves. “He wouldn’t let them go out and play. I also forbade them to visit their grandmother in the next town unless I accompanied them and could watch over them, ”Mwara recalls. “Although I don’t know of anyone in our town who has caught COVID, rumor has it that a young man from the next town came from Nairobi to gather his harvest, and within a week or so he died of respiratory complications. Most people believe that he died of complications from covid because his funeral was rare, but they are just rumors. “

Mwara is concerned that with the reopening of schools, the movement of people will cause the virus to spread further afield

Mwara worries that with the reopening of schools, the movement of people will cause the virus to spread further afield. “I am concerned about my children, I want to protect them. That is why I have asked them to strictly comply with the government’s standards until we can get vaccinated, ”he admits.

According to Mutahi Kagwe, Cabinet Secretary for Health, the Kenyan government has commissioned 24 million doses of the vaccine. Meanwhile, it looks for ways to partner with Chinese companies that have developed covid-19 vaccines. Kagwe explains that the Oxford-AstraZeneca preparation is much cheaper and easier to store than those from other pharmaceutical companies.

During the burial of her cousin Grace Nyawira in the village of Mutwewathi, in Mukurweini, Nyeri County, Kagwe stated that the government-purchased vaccines would arrive in the country in February. He also urged parents and teachers to ensure that children wear masks as part of the school uniform.

Teresia Wanjiku, a small farmer from Lobere, Laikipia County, believes that God has protected her from the contagion of COVID-19. “In this town no one has gotten sick, and I hope we continue like this. Anyway, we are looking forward to the vaccines. We need them so that we can trust those who come from outside again. Outsiders can be infected and infect us, because many of us do not wear masks ”.

Wanjiku thinks that their rural way of life influences that they do not use this form of protection. “Interactions are minimal, because during the day everyone is busy working the fields, and at night we are too tired for social encounters. So most of the time we spend with the family. But in the meetings in the church or in the center of the city, where there are many people, we wear a mask ”.

According to the farmer, there is not much information about the vaccine, but she hopes that when it finally reaches the country, there will be more. “Maybe I have missed the news about vaccines. If the schools did not open, I would not worry too much about the issue, but my children are going to go back to school, and I am afraid for them ”.

Their fear is that children who go to school could get covid-19. “Maybe the opening of schools should have been delayed until the vaccine arrives. How are they going to maintain social distance if there are no classrooms or dormitories built? ”He asks.