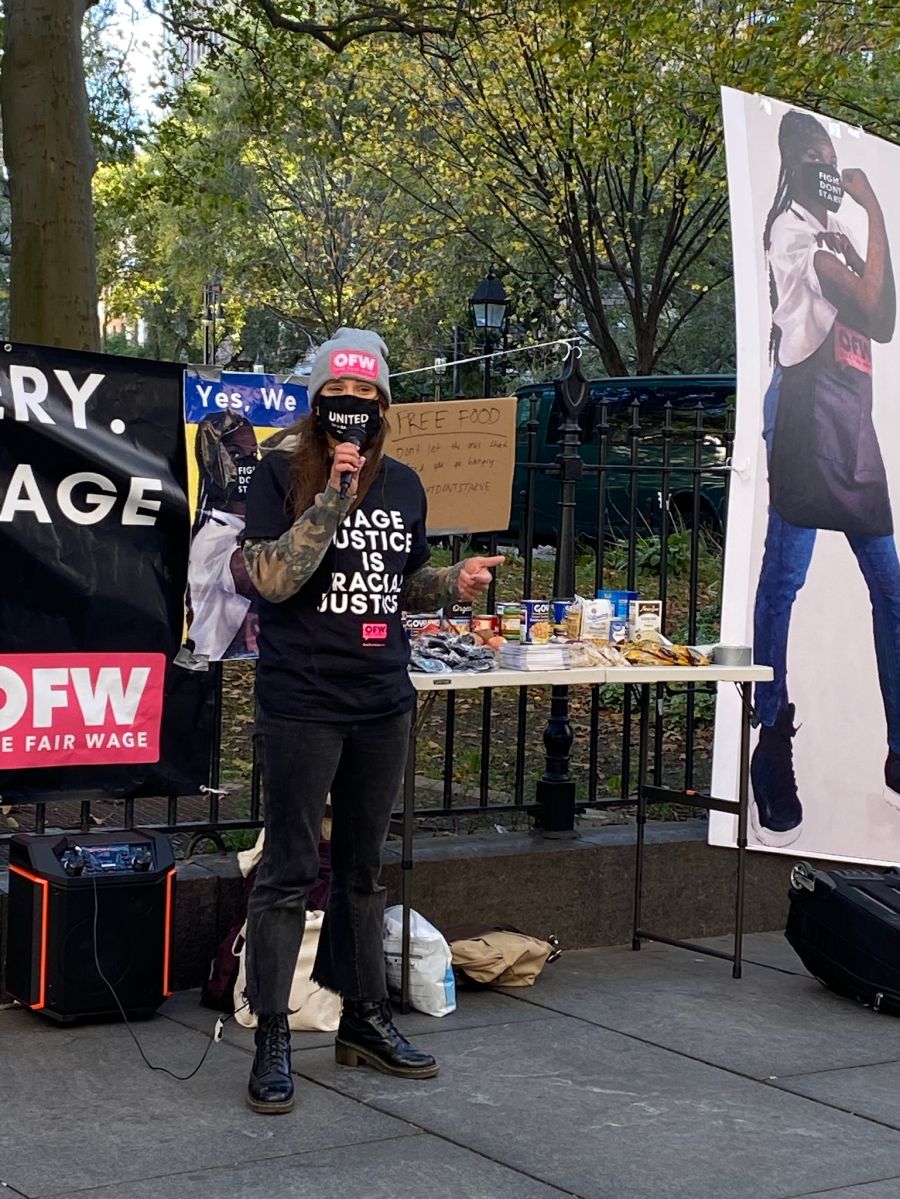 “Elena, the essential worker” returned to the street, this time in Union Square Park (Manhattan), to remember the difficulty and risks of an essential job that also has a sub-minimum wage, less than $ 15 an hour. And it’s a call for these wages to end and equalize to statewide minimums at a time when restrictions are threatening tips.

Elena’s is a statue – similar to that of Rosie the Riveter, the image of women in factories during World War II – that is being shown by advocates for the minimum wage with tips for those who work serving in restaurants and bars is like the rest. That is, make it $ 15 an hour and add tips.

This campaign began recently in the city coinciding with the situation created by COVID, something that increases the risk at work due to high exposure while on the other hand it turns waiters into employees who, in addition to doing their work, are those who remember to customers who have to wear a mask and maintain social distance. That risk is not offset by a better salary, and that role puts tips at risk.

The minimum wage for restaurant staff who charge tips in NY, they amount to just $ 10 an hour and they reach $ 15 with tips or with what the employer pays them and then they request as a tax credit. Outside the city the base amount is less and the credit tip it does not cover until it reaches $ 15 an hour.

The fact that a 10% surcharge can be charged by restaurants for the costs of COVID, that the business is limited inside the premises and now the closure at 10 at night, is reason to fear for enough tips to offset wages.

The demand is not new, its urgency is. In June, Congresswoman Alexandria Ocasio-Cortez served tables at an event in Queens that once again highlighted the precariousness of those who depend on a salary below the minimum. Annette Alcalá, a waitress with whom this newspaper recently spoke, explained that her tips had fallen between 50% and 70%.

On Monday, when one of the celebrations of the year is already on the countdown, it was recalled that these workers also want to be able to afford a Thanksgiving dinner.

More than 1,000 workers, according to the organizers of these calls, the One Fair Wage organization, have signed a letter to the elected officials of the city so that there is a single salary. They explain that they would agree to a permanent 10% surcharge beyond the pandemic if the minimum is guaranteed the same as the rest with tips. Without this, “the already low tips make the food insecurity suffered by workers who already have problems paying rent and other basic expenses.

A recent report points out that black women also charge less tips than white men. Improving the base salary helps eliminate the problems of these differences.

This sector is one of the most affected by the pandemic. The progressive opening of businesses has helped many workers but many have closed and there are still thousands of unemployed workers in the city.