Despite the fact that Starlink is thought of as a satellite internet business, which provides coverage to all those clients who live in rural areas without the possibility of fiber optics, in China they believe that Elon Musk’s network is a danger to the nation.

A researcher at the Beijing Institute of Tracking and Telecommunications has pleaded with China to go ahead with the necessary military efforts to remove the Starlink satellites for national security reasons. All in a national peer-reviewed journal.

According to the South China Morning Post, lead author Ren Yuanzhen and his colleagues advocate in a Modern Defense Technology not only because China develops anti-satellite capabilities, but also because it has a surveillance system that can monitor and track all the satellites of the Starlink constellation.

“A combination of methods would have to be adopted to render some Starlink satellites inoperable and destroy the constellation’s operating system“explain the scientists.

But why? Chinese geniuses estimate that the data transmission speed of US military stealth fighters and drones could be multiplied by 100 through a connection to Elon Musk’s satellites.

The authors also expressed concern about the ability of Starlink satellites to rapidly change orbits using ion thrusters as an offensive measureor for military equipment to be disguised as Starlink machines and sent into orbit undetected.

This means that China will need improved surveillance systems to detect counterfeits and, according to Ren, the ability to intercept Starlink signals to look for threats. 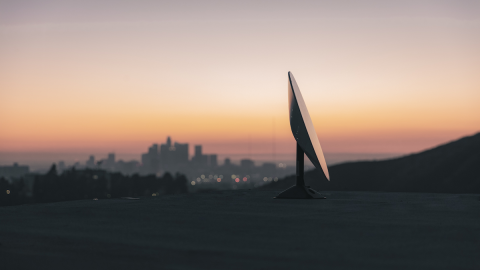 This is the new Starlink portable rate: internet wherever you want but paying an additional cost

Unfortunately, for the researchers, with 2,400 satellites in orbit, taking down Starlink would be quite difficult to achieve.as the system is extensive enough to continue to function even with hundreds of kills.

While a method of “hard death“, like a grappling arm or a ballistic missile, may not be the most feasible, a method of “soft death“, such as the use of jamming technology, would be more practical. Today, the practice of jamming satellites is considered a typical war activity.

Although Starlink’s parent company, SpaceX, is privately owned, has contracts with the United States Department of Defense, as an award for the construction of satellites that track and warn of hypersonic missile launches for the Space Development Agency.

Starlink helped Ukraine with connectivity after a suspected cyberattack wiped out the previous satellite service amid Russian military aggression.

If China takes down Starlink, there will be more satellite broadband systems. The 3,236 birds of Amazon’s Kuiper Project are ready to take flight. And in Europe we have plans to launch a few others.

China also has its own mega-constellation in the works, called Xingwang, or SatNet. The Chinese analogue of Starlink was established in 2021 and is planned to contain some 13,000 satellites.