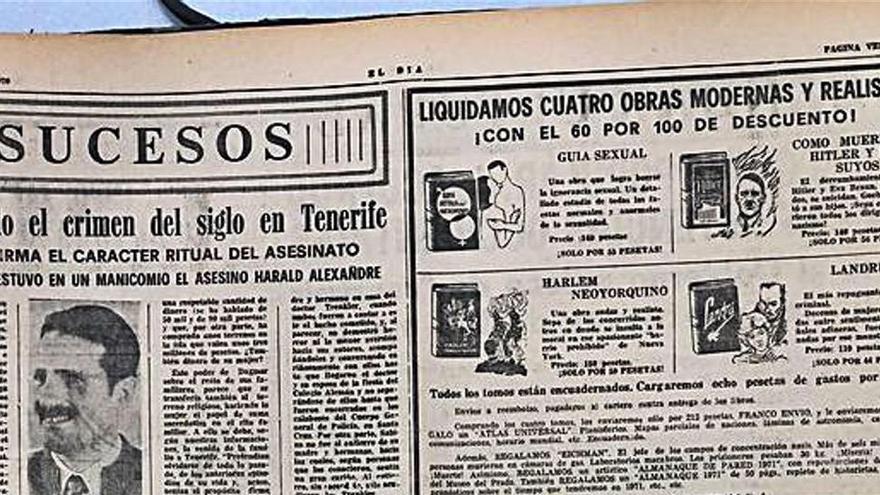 The police report of the so-called crime of the Alexander Family, which occurred on December 16, 1970 in Santa Cruz de Tenerife, It is already by itself a story that could be included in any of the terrifying novels of Thomas Harris, Hannibal Lecter’s literary father, although the account of the events committed by Harald and Frank Alexander have a terrifying nuance that the cannibal of the books lacks : are real.

The degree of madness that was experienced that late Wednesday night in the apartment of the capital of Tenerife where the Alexander family lived is not only chilling because of the brutality of the events but also because of the initially insignificant data for the investigation that they were completing. the story when the police officers tried to unravel the case. For example, that pieces of “offensive” human flesh — nipples, heart, vagina… —would be found hanging around the house as an offering; that no one in the building heard anything –“I heard some very faint moans,” said a neighbor– or that the father, Harald, was dedicated to play a harmonium brought from Germany while his son extracted organs from his mother and sisters.

Nothing was accidental that day. The Alexander family, made up of Harald and Frank by the mother, Dagmar, 41, and the sisters Marina, 18, and the two twins, Sabine and Petra, 15, had turned their home into a kind of messianic society in which the four women lived at the expense of the wishes of Frank, the youngest son, considered by his parent from birth an envoy of the Messiah: the Son of God on earth. And his mother and sisters believed it too, agreeing to be relegated to the background and even accepting, have sex with him because the rest of the women could contaminate the considered Prophet of God.

The Alexander were a family of Religious fanatics who believed that all people outside of their little sect were “property of the devil.” His warped type of Christianity was based on the fact that only the members of his group were free from Satan’s control., and all the others were instruments of the devil that needed to be purged with violence if the chosen one gave the word. And in 1963 Frank was born, ‘his’ chosen one and, 16 years later, the co-author of the patricide of which it’s now five decades, an event that is considered the first case with fatalities related to sectarian groups in Spain.

Originally from Dresden, Harald Alexander and Dragma then moved to Hamburg, where the head of the family, who had spent 15 years in a psychiatric facility, became disciple of George Riehle, self-appointed leader of the Lorber Society, a religious group formed by Jacob Lorber in the early 1800s that, based on a “severe” spirituality, taught unwavering self-denial and held the belief that all who were not members of his group were basically evil. Riehle became a member of this small sect, which never had more than a few hundred members over the decades, though they committed some crimes similar to those of the Alexandesr in the Canary Islands, and sometime in 1930 came to believe that he was the Prophet of God.

Alexander met Riehle in Hamburg when the old man was dying and cared for him during his last days. When Riehle passed away, Harald announced to his wife that had inherited the leadership of the Lorber Society. He also inherited an old fetish coat and a portable harmonium or organ with an accordion mechanism that provided musical accompaniment at society gatherings. The neighbors of the Alexander house in Santa Cruz de Tenerife, after the crimes, related to the press the marathon singing, organ and prayer sessions that were heard in the flat of those Germans day after day.

Dagmar Alexander, the wife and mother finally murdered, shared her husband’s convictions and accepted his self-proclaimed role as leader without hesitation. When his son Frank was born, Harald told him that his son was now the Prophet of God and that all his whims were to be obeyed. And she agrees again as the child grows up cared for by members of his family: his older sister Marina, his younger twin sisters, Sabine and Petra, and his parents. They responded to all his wishes and, in time, Frank was able to dictate his every move by turning the women of the family into his sex slaves..

The mother was terribly tough and kept Frank with his left hand tied because he was left-handed. Further, the young man stuttered and the head of the family sent him to psychologists to correct what according to his way of understanding life was unworthy for someone sent from God. Their stories began to circulate first among schoolmates and then among the city’s teachers.

As is often the case in these cases, the Alexander family did not understand why their behavior was judged outside and finally the family leaves Germany because their customs, especially incest, were already a cry between the Hamburg society and the Police was investigating them.

On those dates, Dragma receives an inheritance of 20,000 marks one day that Harald wears the fetish coat that George Rhiele gave him when he died (since then it became the coat of luck) and just agree to buy land in the Los Cristianos area, on the island of Tenerife, place they did not know except by hearsay.

In order to understand this event, it is necessary to be clear about the seamless acceptance by the family of their satanic-religious beliefs and the role of savior that Frank played. So much so that when Harald Alexander tells his surviving daughter [Sabine se salvó porque estaba trabajando ese miércoles en La Laguna] that together with her brother has ended the lives of her mother and sisters, Sabine takes her father’s hand and takes it to her cheek, saying: “I’m sure you’ve done what you think is necessary“.

Dr. Trenkler, a German physician whose practice Sabine worked in, was dumbfounded at the conversation. “Ah, you heard it,” Harald told him. “We have killed my wife and other daughters. It was time to kill“It was the doctor who alerted the German Consulate on the island and they, in turn, called the police who finally detained the father and son.

The Heart of Jesus at the crime scene

The police officers, after proceeding to arrest the two confessed Germans, moved to the family home on Jesús de Nazaret Street – another divine sign for the minds of the Alexander – on the corner of Viera and Clavijo, in the center of Santa Cruz de Tenerife.

It is easy to understand then the account of the report with which this report begins after knowing the crime. Obsessed with the Christian iconography of the Heart of Jesus, the divine image was distributed throughout the house with the son of God pointing out his bleeding heart on walls, photo frames and calendars. Anything goes. The corpses of the three women were in two rooms: Dragma was the first to die. After lunch she had moved into a twin bedroom to nap with her husband when Frank came in and sat on his father’s bed staring at his mother.

Frank Alexander would later tell one of the psychiatrists who found that the mother “had a demonic look, cold as ice and a sarcastic smile on his lips “. The minor under 16 begins to slap her” and transformed into a superior being, “he defines himself,” he tells his father to take a clothes hanger and between the two keep hitting him; the mother agrees and places herself face down to allow herself to be done, “they assured during the trial. They remain in the room for about an hour beating Dragma to death. They then continue in the other room beating the other two girls. At one point, Harald begins to play the harmonium scores from the Lorber Society sessions while his son raged on the bodies family members using pruning shears, shoemaker blades, a hammer …

The house was full of blood and tissues scattered on the walls, the floor and the ceilings when the Canarian police arrived that December 1970. Hanging from ropes throughout the house they found breasts, nipples and other “perverse organs”, as they called the female genital organs these two diagnosed mental patients (released due to insanity). The religious image of the Heart of Jesus was part of all that scene found in the home of the fanatical religious family.

After the brutal ritual – “a sacrifice will make you purer“, said the family members— Harald and Frank showered, changed their clothes and headed to the south of Tenerife, a journey by car from Santa Cruz de Tenerife of more than three hours then until they reached the Los Cristianos area. where they had bought some land.

His first intention was to escape to Germany by plane But in another outbreak of madness they had gotten rid of all their documentation, including passport, which prevented them from flying.

Both spent the night in the tourist area of ​​southern Tenerife, in Adeje, with about 25,000 pesetas in their pockets (150 euros now but a significant amount for a family that considered itself poor – Harald was a bricklayer, and the women cleaned and cared for children and sick— and already in the morning They went to La Laguna to report what happened to their daughter Sabine. It was December 17 when they arrive at the villa of Dr. Walter Trenkler, asking to see Sabine, 15, who worked for Trenkler as a maid. The doctor found her in the kitchen preparing a meal and told her that her father and brother were in the yard waiting to see her. Then the aforementioned announcement occurs and that listen to the German doctor before alerting the authorities.

Harald and Frank’s way of assuming the deeds they had committed from the outset, with the utmost normalcy and almost boasting about their purifying action, was key to their release. The defense requested his confinement in a psychiatric hospital and the prosecutor ordered the death penalty for Harald (in Spain it was still executed by vile stick in 1972). For Frank he asked for 40 years of minor imprisonment, 20 for each of the victims.

Finally, the court acquitted the defendants of the crimes of parricide and murder because they were “not responsible authors” and “by concurring in them the defense of mental derangement“They also had to pay 900,000 pesetas to Sabine Alexander, the surviving sister.

According to the judgment of March 26, 1972, he was admitted “in one of the establishments for the sick of that class, from which they may not leave without prior authorization from this court.”

Harald and Frank were admitted to the Madrid Penitentiary Psychiatric Assistance Center but in 1990 they managed to escape and even Interpol issued a search and arrest warrant international but no luck and both disappear. Today Harald Alexander would be 91 years old and Frank Alexander 66.

The case of the Alexander Family, how could it be less in these times of the Internet, continues to arouse interest among society, and not only Spanish and German, and there are some web portals where it is, among other issues, the whereabouts of the protagonists survivors of this dramatic event accompanied by harmonium. In one of them they say that Sabine Alexander, now 65, entered a cloistered religious order to continue away from the demons that exist in society. Harald and Frank are said to have been taken in and hidden by members of the Lorber Society in Austria, although the sect has adherents in Europe and the US.