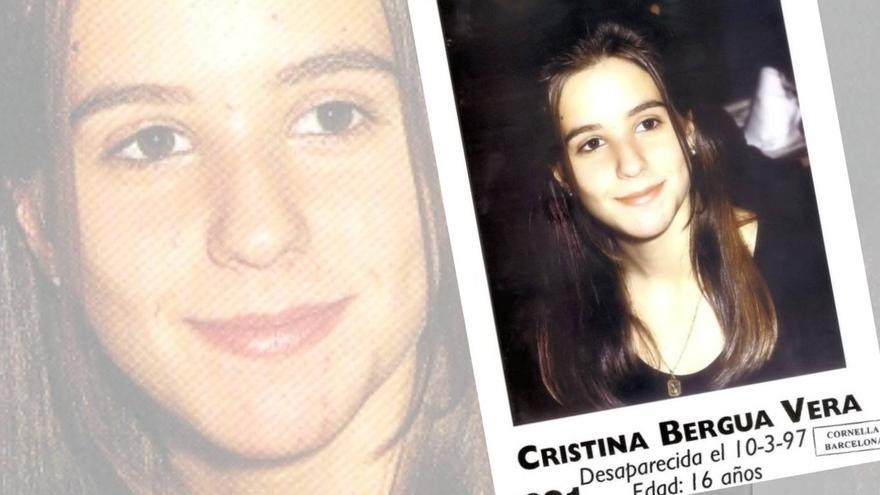 “Cristina, I am almost convinced that you won’t see us and you won’t listen to us, but if so, you already know that wherever you are we are waiting for you with open arms. You know that you have us here and that both your parents and your brother we will always be. Also your nephews. We have two grandchildren who, although they don’t know you, they usually ask a lot about Tita Cristina “.

The one who speaks is Juan Bergua. At his side is Luisa Vera, his wife. They are both Cristina’s parents. They have been fighting pain for 24 years. Against uncertainty. Against absence. Since March 9, 1997, they have been waiting in Cornellá de Llobregat (Barcelona) for their daughter, the youngest of the house. He was 16 when he disappeared. That Sunday she was meeting a boy she was dating, ten years her senior, ready to leave the relationship. He did not return. Since then his family live by and to find it. Since then, Cristina Bergua’s name has been an emblem, shield and engine.

To tell their story, they take a deep breath and have to take time. “It hurts like the first day,” says Juan. Maybe more. They go back to 1997, when they said goodbye to her. Cristina was that afternoon in her brother Germán’s room.

He was never late without warning

“Pitu, aren’t you going out today?” His mother asked him. “Yes, mom, but I’m waiting for you guys to come out so I can calmly fix myself.” ANDs sunday. At the Bergua house they have eaten as a family: Juan, Luisa and their children, Cristina and Germán. Homework was done. “We were going for a walk and she stayed in her brother’s room playing the guitar, which she didn’t know, but hey… she liked to ‘play’ with the music on”. Neither Luisa nor Juan forget that afternoon. They neither can nor want to. “We left, we gave him a kiss and we left the bathroom free.”

They returned after the walk. The clock read 10:00 p.m. Cristina had to be about to arrive. It did not. Only five minutes of delay set off the alarms. “Cristina was very responsible for that,” remembers Luisa. Sometimes it was delayed “but never without warning: Mom I’m here, Mom I’m there … “, bill. He neither arrived nor called. Cristina that afternoon He disappeared.

“A missing young woman is being sought in Cornellá. Help us find it “

Not half an hour had passed when Juan, her father, went to file a disappearance complaint. They would not accept it officially because, at that time – in 2009 the Ministry of the Interior changed the protocol – it was necessary to wait a few hours for the National Police or the Civil Guard to officially register a disappearance. Far from waiting, a search began at home that continues to this day. They went out into the street, walked through squares and gardens, shouted his name and covered the area with Cristina’s face. “Help us find it. They are looking for a missing young woman in Cornellá. ”

Image of Cristina Bergua that they used in the posters that were printed.

“We made the posters with the last photo we had of her, it was from a wedding, the most recent we found.” They wallpaper a stretch of almost 8 kilometers. From Cornellá to Esplugues de Llobregat, streetlight by streetlight. For every thousand posters they were charged 30,000 pesetas. They made 300,000. In addition, they printed black and white images, about 200,000, in total they reached half a million. Cristina’s face turned to Spain.

The media echoed the search. “He disappeared Sunday afternoon. On Monday the alert was already on television. We went to San Cugat del Vallés, at night she was already on Paco Lobatón’s program, “recalls Cristina’s mother. Everyone was rowing to find the young woman. Everyone except Javier Román,” her supposed boyfriend, “the last person to see her. saw.

“I am not going to marry him, I will become independent and I will always come for tuppers mom”

“Cristina’s relationship with that boy was always weird,” Luisa recalls. She had been seeing him for a few months, on and off. “It wasn’t a boyfriend, boyfriend. He always told me that he didn’t really want anything with that boyIn fact, she was telling me that she didn’t want to marry him. ”

Cristina Bergua, in a photo shared by the family.

It was her first ‘boyfriend’, her first dream. Luisa, her mother, never liked her tattoos, although what alerted her the most was her interior. “He didn’t have many aspirations.” Cristina always calmed her down: “Mom, I don’t want a future with him. I’m really going to become independent on my own and I’ll come home for tuppers and wash my clothes“That Sunday he would make it official. Cristina got ready, took two hundred pesetas of the time, the identity card, and went to Javier Román’s house.

Her boyfriend “never helped” look for her

“Cristina did not arrive and when Juan came from the police station, we began to get very nervous. I called all the friends and they told me that Cristina had gone to Javier’s house because she wanted to leave the relationship,” Luisa recalls with pain. They went to his door that same night. On two occasions, Germán, Cristina’s brother, asked her. “It never helped us. He said he had taken her to the Esplugues road at nine at night. That they said goodbye there. That I did not know more. “The mother, he adds,” never accompanied us in anything. We were all day on the street looking for her, in all the squares … and he was always at home. From the first moment we blamed him that, at the age of 26 he was, he did not go out on the street to search with us. People came for photos to take and paste. He never came for a poster of my daughter, not even at a rally. ”

Juan and Luisa don’t stop, they have been searching for answers for 24 years.

After a night to forget, Monday morning officially started an investigation that has not stopped since. Javier Román automatically became a suspect because he was the last to see Cristina. He tried to divert attention, calling the whole fuss “nonsense” and pointing to voluntary flight. “He will come back when he is 18, he was saying around there,” Luisa recalls.

The investigators never believed it –at the start of the National Police, and when they assumed powers, years later, the Mossos d’Esquadra-. His family also dismantled him. “At that time there was money at home, a lot, because my son had to give the entrance of a flat. My husband was going to take him to the bank the next day and that afternoon the money was at home. Cristina knew it because at home we share everything. If she had thought to run away, staying alone, she would have taken him to leave, right? ” Luisa, goes further: “He came out with nothing, the only thing he took was the keys and the card. When she was left alone, she had the opportunity to have taken clothes, money … The keys, I say, why would she want them if she wasn’t coming back? “.

The shadow of mistreatment, of the macho crime, always lurked. Javier was questioned on several occasions. Cold and without hesitation, he always kept the same version. He didn’t know anything, he left her at one point and said goodbye. They never stopped investigating him, but they did not find anything conclusive to attribute the disappearance to him. I know they looked at 3 kilometers of sewage that began with a manhole that overlooked their patio. His phone was tapped … all to no avail.

Knowing himself in the spotlight, Cristina’s boyfriend put land in the middle. He went to Santo Domingo. Meanwhile, Luisa did not move away from her portal, “the first months He lived on the phone, hoped they would call from somewhere to tell me that a car had hit him or something similar. It was clear that something had happened to Cristina. “He is still waiting for it to ring 24 years later.

“I am your daughter, I am kidnapped”

Throughout these 24 years, Luisa and Juan have lived through it all. They have picked up the phone before fake calls from heartless people seeking to harm them: “I am your daughter, I am kidnapped”; “If you give me so much money …”. Also calls from people with good intentions, but little success. They have searched Cornellá, also outside.

They traveled to Castellón, because supposedly someone had seen Cristina at a fairground ride – “in the Hammer” -. Also to Puigcerdá (Gerona), after the alert of some Civil Guard agents who believed they saw their daughter held in a brothel. Nothing was accurate.

Anonymous letter and a landfill

What most stirred everything was an anonymous letter received months later, assuring that Cristina’s body was in a landfill. It caused the Search for the body of the young woman in the Garraf Landfill (Barcelona). Nothing was found. Since then no one rests. Everyone is looking for Cristina. “Next week we will meet again with the investigative body, Mossos, to talk. They do not stop looking for our daughter.”

Cristina Bergua, whom everyone called Pitu, because the blue dolls hit hard at that time, and “because she will always be our little one.” The teenager who was studying second in BUP, aimed high, wanted to fly, “he told us that his I dream of being a stewardess, she has been learning English for two years“. The open, friendly, spontaneous young woman is not there. She has become a symbol of all the families that have a missing person since 2010. The year since, on March 9, the day of their disappearance, the Day is commemorated. National for Missing Persons without apparent cause A sad date for Cristina’s parents, but, in part, it is a tribute – albeit sad – for their daughter.

The Mossos are still looking for the thread to pull to find Cristina.