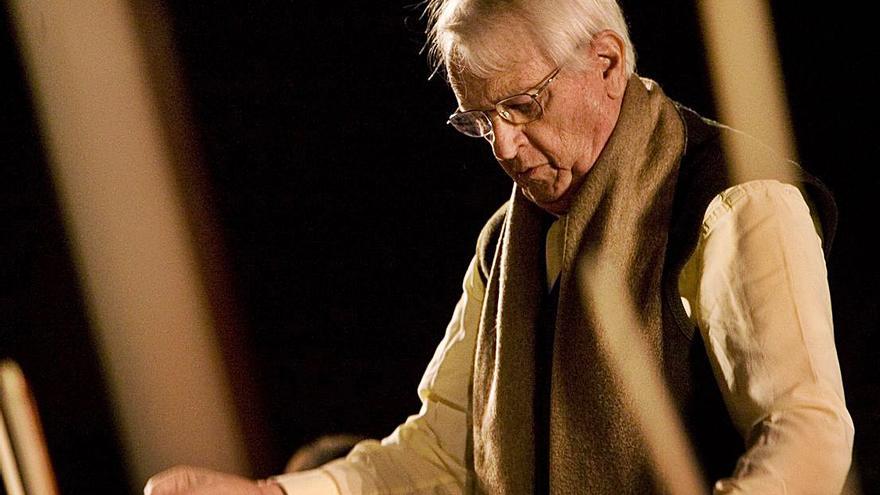 Commenting on this self-definition, Laín Entralgo wondered if there was then «a composer who in a more conscious and resolute way wanted to put his works, from the sound material and the technical form of each one, at the service of the triple struggle in which the best of the The human race is committed: it fights for the real freedom of men, it fights against the scourge of undeserved pain, it fights towards a clean and authentic implantation of existence in that which for each one is the last foundation of his own reality.

Clearly, there was no such composer who would have taken his humanistic message to a higher level of creativity and mastery.

Cristóbal Halffter opened his catalog at age 21 with Scherzo, who won him the Extraordinary Prize for Composition from the Conservatory of Madrid, his hometown. Two years later, counting only 23, he received the National Music Prize with his first Concerto for piano and orchestra. These works, as well as the Paschal Antiphon, the songs about Gil Vicente, Alberti and popular Leonese, the Three pieces for string quartet, the ducal Mass, the Concertino, the Two movements for timpani and string orchestra and the ballets Saeta and Playing the bull, to cite just some of the most widespread of his first stage, illustrate the moment in which the composer extracts his own voice from the influences received from his teacher Conrado del Campo and from contact with his uncles Rodolfo and Ernesto, leading figures of the “Generation of the Republic” that brought to his imagination the transformed echo of Manuel de Falla and the sonic universes of Bartok and Stravinsky.

The 1958 Sonata for Violin Solo marks a decisive leap through serialism. The scandalous premiere of Cinco microformas para orquesta, two years later, heralds both the break with the previous work by fixing the basic elements of personal language, and the entry of Spanish composition onto the scene of international contemporaneity. The sixties saw the birth of numerous experiences on sound objects and formal structures whose mathematical objective is reconciled in Cristóbal, as in very few colleagues, with a substantively musical expressiveness. The formants, mirrors, sequences, lines and points and rings of those years give a splendid Spanish response to a generalized restlessness in Europe and promote an adequate parallel in our cultural space.

This progress in sound ideation is simultaneous with the conception of the first titles that seal an ideological commitment to their historical time and circumstance. After putting some of Brecht’s poems to music, he accepts the UN commission to celebrate the 20th anniversary of the Universal Declaration of Human Rights. That Yes, speak out, from 1968, the result of the commission, includes in Norman Corwin’s text the literal wording of the articles of the Declaration that best exalt the dignity, freedom and equality of all men.

Possibly in this work the composer’s humanist ideals fully crystallize for the first time. Starting from it, there are many who make man a supreme value and fight in the sphere of pure musicality against everything that tends to impoverish, oppress and alienate him. Humanism, which in Halffter’s thought is an articulate and constant doctrine, acquires genuine expressive values ​​in his music. Some with texts and others focused on the sound of electro-acoustic instruments and devices, works such as Passive Night of Sense, about San Juan de la Cruz, Plant for the victims of violence, Requiem for imagined freedom, the Electronic Nocturnal and Gaudium et spes-Beunza celebrate the values ​​of the eternal man, contemplated in his historical and psychological evolutions and those of modern man, who has to be defended from injustice, disorder and violence. Critical defense in most cases, which aims to fix, despite contradictions and errors, the inalienable quality of human nature. And nothing better for this than music conceived and written in the highest levels of form and expression.

Man is for Halffter the source of all values, and those values ​​revolve around the essential and existential axis of freedom. More than human nature, since each man is what he manages to make of himself, he considers in his music a “human condition” that does not want to refer to abstract universality or a metaphysical idea, but to the concepts of essence, destiny and freedom inherited from the Greek tragedy.

This attitude also transcends his work from the constant relationship with historians, thinkers and poets. His concept of Spain and of the Spanish grew in the family environment of Américo Castro. His friendship with Xavier Zubiri, Laín Entralgo and other great intellectuals provided the basis for the system of ideas itself. And the reading and reflection of the poets of the three Spanish cultures, Christian, Arab and Judaic, shaped a perception of the Hispanic that acquires exceptional power and projection in their work. Halffter is perhaps the most “Spanishist” of contemporary composers, being, at the same time, the least touched by the seduction of popular folklore and the most universal in terms of language. It is demonstrated by almost the entirety of its catalog, from the first titles to the Mobs, of 1996, an impressive model of universalization of the ancestral.

The Spanish presence always returns in the evolution of a hundred titles and in the many masterpieces they contain. The Passive Night of San Juan de la Cruz figures among them, as well as the Elegies to the death of three Spanish poets, the Jarchas de dolor de absentia, the Three poems of Spanish lyric, Reading Jorge Guillén, the orchestral Versus inspired by Juan del Encina, or the masterful Seven Songs of Spain, from 1992. I have written about them that it seems difficult to say more, to musicalize a greater density of ideas, to sing better roots that, thus contemplated, with passion and respect, affections and the understanding of a true creator, are also revealed to us as destiny. The most beautiful thing about this music is that, apart from the poetic discourse, and if the words were inarticulate intonations or only instrumental sound, they would also produce the impact of the masterpiece, the one in which the forces of the heart and the mind are imaged. , vibration that flows, circulating blood in the deepest unity of the artist and his world.

Everything that has been and is the human voice in Halffter and everything that his orchestral art means is in the works in which he gloss and celebrates the Hispanic heart. The Christian, Mozarabic and Sephardic stanzas converge in a fusion ceremony, an enjoyment of the senses projected on the historical memory, the cultural heritage and the sensitivity of the Spanish. Those songs are those of our cultural lineage and our consciousness of an old society that feeds back its spiritual energies at the gates of the third millennium.

Halffter’s Spanish drive, admirably structured in the solo voice, the choral ensemble, the chamber ensembles and the orchestra, still reserves for us what he had never done before in his career of so many years of creation: I am referring to opera. , the only late-absent genre in his catalog. The first could not be other than Don Quixote. From her that a symphonic suite in Lisbon sounded like the first during the Universal Exhibition, and it was premiered theatrically at the Teatro Real in Madrid once it was concluded. Don Quixote is the subject, the character and the worldview with the most permanent presence in the composer’s fantasy and constitutes, without a doubt, the highest word of his Spanish thought.

The intensity with which the roots and cultural heritage permeate his art is manifested, on the other hand, in the admiration and respect of his retrospective views on our historical music. Some of his most popular productions, such as Tiento y battle or the Prelude to Madrid 92, among others, exemplify an astonishing aesthetic and formal transfiguration of literal quotes from the past.

But the identification of Cristóbal Halffter with the language of painting and sculpture is no less significant. Rivera, Lucio Muñoz, Sempere and Chillida have occupied his sound imaginary, and among his most applauded works are still the Daliniana or the sounding Mural of 1995, dedicated to Tàpies. The extent to which thought, poetry, plastic arts and music, viewed from the Spanish, historical and current perspective, have become indivisible formants of its inspiration, and even of its language, we saw it crystallized in the most anticipated premiere of the beginning of century: the Cervantine opera that had aroused more expectations than any other project.

It was normal that the premieres of Cristóbal Halffter had the unmistakable tonality of the great event. Since the premiere of his Scherzo gave name and meaning to the “Generation of 51” there have been countless awards, honors, commissions, trips and premieres throughout the world. His biography surpasses in international recognition and tributes to all the Spanish composers of the second half of the century and equates him to the greatest of any country. To his condition as a composer premiered by almost mythical interpreters, such as Rostropovich to cite just one (for whom he wrote his second Cello and Orchestra Concerto and conducted by the first batons, he adds an intense activity as a conductor sought after and applauded on several continents. From the Berlin Philharmonic to the Spanish provincial orchestras, the list of podiums that he has occupied as a performer of a wide repertoire, not limited to contemporary forms, is enormous.

This enviable ability to stretch time and double its value also places him among the most fruitful masters of composition in the birth of talented disciples. He was a professor of composition and director of the Royal Conservatory of Madrid, but his essential pedagogy flows in personal contacts, courses away from the academic rigidity and magnetism that his figure and his work exert on young musicians. Open to them and generous in the contagion of knowledge and vocation, he has explained throughout his life the model of musician and man that he has always wanted to be. His family atmosphere is music, both in the generation that preceded him, with his uncles Rodolfo and Ernesto leading the illustrious roster, and in his own, in which he had the support and identification of his wife, the great pianist María Manuela. Caro, dedicator and interpreter of the second Concerto for piano and orchestra; and not least in the one that happens to him, with their son, Pedro, who is one of the best trained and most solid conductors of Spanish orchestras.

The family castle of Villafranca del Bierzo has been a meeting point for the illusion of young people and the knowledge of the teacher. The composers who formed the so-called “Grupo del Bierzo”, among them the unforgettable Enrique Macías, premiered in the country and abroad the great music that corresponds to the teaching received. And I cite this Group as one of the most recent among those encouraged and stimulated by Cristóbal Halffter in his permanent didactic availability.

Finally, I refer to his talent as a writer, not restricted to musical analysis. As a polemicist in the press, he was admired throughout the country for the lucidity and opportunity of a criticism that from time to time stirred the still waters of conformity, routine and flattery. When Halffter brought up one issue or responded to another, we knew in advance that there was going to be a necessary clarification, a stimulus applicable to all aspects of culture.

Many pertinent evaluations are inevitably left out when we have before us a true artist and a splendid human being. To escape the melancholy, I return to Laín Entralgo and ratify those his words: “All Spaniards for whom living is not just a mere living, we owe Cristóbal Halffter very lively gratitude.”