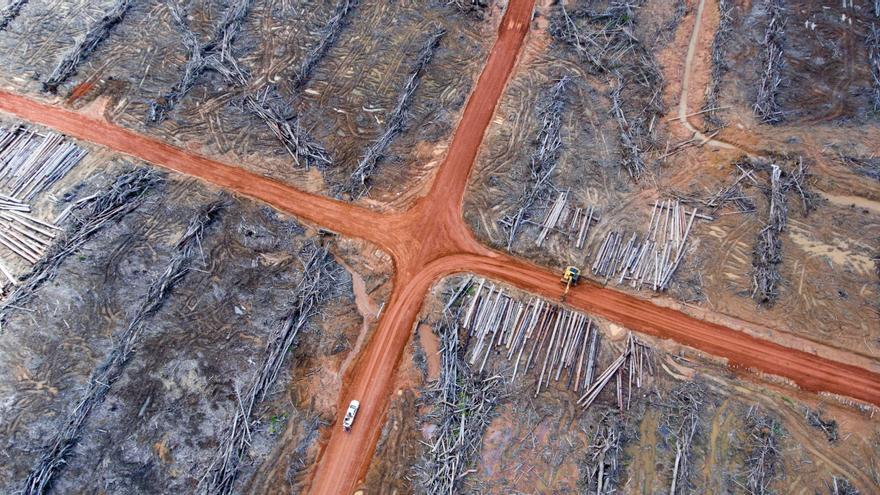 The advance of agriculture is unstoppable. Agricultural land is taking over much of the planet. In the last two decades, crops have devoured more than a million square kilometers of the Earth’s surface, twice the size of Spain.. Scientists have already raised a cry: the expansion of the agricultural area, in many cases replacing forests and savannas, poses a great challenge for the protection of the climate and biodiversity.

A new world map compiled from data collected by satellites shows that farmland has expanded dramatically so far this century. The study, which has just been published in ‘Science’ and ‘Nature Food’, highlights how Earth is becoming a gigantic unified global farm, with richer countries increasingly ‘outsourcing’ crop production to poorer regions.

Half of the new fields have replaced forests and other natural ecosystems (natural vegetation and tree cover) that stored large amounts of carbon, which threatens efforts to conserve Earth’s increasingly precarious biodiversity and prevent a catastrophic climate change. “The inexorable advance of the human footprint is just brutal,” says study author Matt Hansen, a geographer at the University of Maryland (UMD).

Hansen and his colleagues mapped farmland using data from a program from the United States Geological Survey and NASA, taking advantage of images taken by various satellites designed to continuously monitor the planet’s surface.

The global farmland footprint increased by 9% during the study period, which spanned from 2000 to 2019, mainly due to agricultural expansion in Africa and South America. The increase in the area occupied by new agricultural fields is several times greater than the estimate of 2.6% made by the Food and Agriculture Organization of the United Nations (FAO).

Despite all this, the world area of ​​cropland per capita decreased by 10% due to population growth. This circumstance can be an indicator of food insecurity in poor countries that depend on subsistence agriculture, according to scientists.

The situation is extremely complex and difficult to solve. On the one hand, world population growth and rising living standards “inevitably” cause the expansion and intensification of the world’s agricultural land use “To meet the growing demands for food, biofuels and other basic products.”

But on the other hand, This expansion and intensification of agriculture threatens the functioning of ecosystems and leads “to the extinction of species through habitat loss and fragmentation ”, warn the study authors, who trust that the results of their research will contribute to approach the United Nations Sustainable Development Goals (SDGs) for 2030, to improve the modeling of crop yields, to progress towards sustainable food production and to reduce the environmental impact of agricultural expansion.

“The SDGs require a balance between increasing agricultural production and maintaining ecosystem services. Implementing the SDGs to improve food security, protect terrestrial and freshwater ecosystems and mitigate climate change requires national policies and international cooperation that are based on consistent, independent and timely data on the extent and productivity of agriculture, “say the scientists.

From the data collected in the study it is extracted that the major lowland regions of the world have become homogeneous agricultural landscapes, including the Great Plains in North America, the Pampas in South America, the Pontic Steppe in Europe, North China and the Manchurian Plains in East Asia, the Indo-Gangetic Plain in South Asia, parts of the Sahel region in Africa and southeastern Australia.

The expansion of cropland in South America – largely due to a booming soybean industry supplying ranchers, particularly in China – occurred synchronously in Brazil, Argentina, Paraguay, Bolivia and Uruguay. . The continent’s farmland increased by almost 50% during the study period.

A similar pattern of simultaneous expansion of cropland was observed in the Sahel and Central African countries. Most of the new agricultural land was created in Africa to feed a rapidly growing population. 40% of Africa’s farmland appeared in the past two decades, and the rate is accelerating. But the crop yields on that continent are the lowest in the world.

In Southwest and Southeast Asia, farmland gain was found mainly in drylands, while tree plantations, orchards, aquaculture, and urban areas replaced former farmlands in China and other countries. Lower Mekong.

The cereal, forage and hay producing lands of the northern great plains of North America have different dynamics within Canada, where land abandonment or conversion to permanent pasture is observed, and the United States, where management has intensified from the earth.

Meanwhile, irrigated farmland in Saudi Arabia declined due to depletion of groundwater resources and the implementation of state policies to discourage the production of water-intensive crops.

The investigation also found the Abandonment of farmland after radioactive contamination following the 2011 nuclear disaster at the Fukushima Daiichi nuclear power plant in Japan.

“The cross-border distribution of major cropland areas and the synchronous dynamics of cropland illustrate the importance of International cooperation to ensure global progress towards the SDGs ”, point out the researchers.

Converting forests and savannas into agricultural fields causes huge amounts of carbon stored in vegetation and soil to be released into the atmosphere, accelerating climate change. This circumstance generates about an eighth of the total carbon emissions caused by humans, according to the researchers.