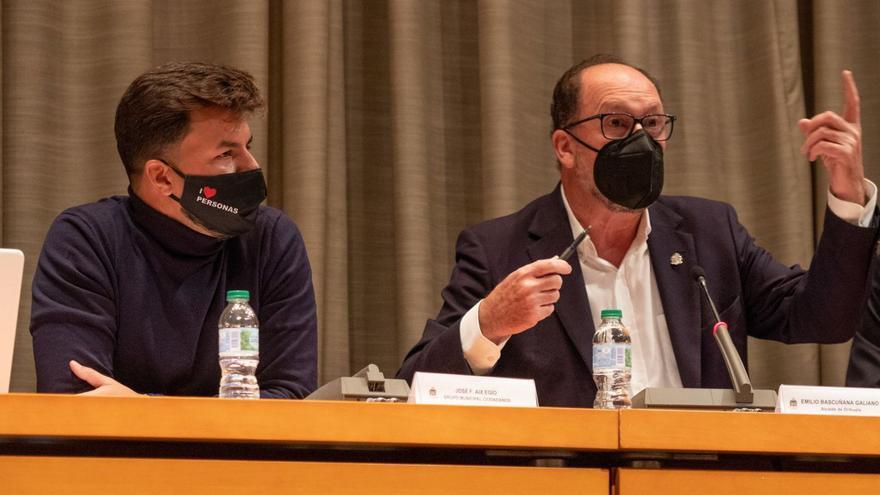 There was already a first failed attempt in the last plenary session, when, after debating, Mayor Emilio Bascuñana withdrew the proposal. A frustrated effort that has focused the political debate in the last month, and also yesterday, despite the intention to mask the differences between the bipartisan. “We leave sensitivities out of this building,” said Deputy Mayor José Aix, spokesperson for Ciudadanos. “There is no debate whether the government should separate or not,” Almagro said. However, everything revolved around that being or not being that is the question. “Buy the CAM or continue to maintain an absolute lock”insisted the socialist Carolina Gracia. In the words of Carlos Bernabé, from Cambiemos, “there is a government with an absolute majority, made up of two parties, without being able to bring anything at the budget level to undertake investments like these”, something he described as “grotesque and ridiculous.”

Hence, credit modifications are debated, because there has not been a budget since 2018, even though they are “necessary and not far-fetched investments. CAM yes, but not like that; not at any price or in any way “, summed up Bernabé, at the same time that he stressed that” the opposition does not block. ” “They have the blockade within,” continued Gracia, who addressed Bascuñana: “Orihuela is suffering from an unbearable situation of blockade,” for which he encouraged him to make decisions, in front of “someone who remains and does not contribute.” In his opinion, he cannot continue to delegate responsibility to the opposition: «The PSOE is not going to be the PP’s lifeline. If they want to dialogue, let’s dialogue and seek agreements. The rest is an excuse to survive ». “When companies do not work, they dissolve. They have been like this for a long time. More than a partner they have a burden. Decide if you want to continue with that burden or go it alone and reach agreements with the rest, “said María Asunción Aniorte, from Vox.

By allusions, Bascuñana acknowledged that, despite his efforts for stability, it was necessary to “reconsider that there cannot be a government that does not have the capacity to move forward with certain issues.” Aix emphasized that “the discrepancies are even positive”, and spoiled the opposition’s position: “The majority seek political artifice.” Next, he explained that his vote against is due to the fact that we must “prioritize emergencies. No one would put their children’s nutrition at risk to buy a chalet “, not forgetting, he added that it is not even the total purchase of the building, but 70%. Along the same lines, Aniorte pointed out that “the merit, value and necessity [del edificio] It is not how they sell it to us. Instead, he proposed “to provide solutions to deficiencies.”

Cambiemos and Vox stressed that there are multiple municipally-owned buildings still closed. In this sense, Aniorte stressed that it is necessary to rehabilitate what is already the heritage of the City Council, such as the old courts, what was the Nuestra Señora de Monserrate savings bank and the Rubalcava Palace.

After the extraordinary session there was a working table to outline the budgets for 2022, after the 2021 project, which included a loan of 28 million, was frustrated. According to sources consulted, one of the non-negotiable conditions is that this external financing be maintained, although the amount has yet to be determined. It is precisely the main point of disagreement with Ciudadanos, which yesterday did not clearly define its position on this matter. He only questioned whether it was feasible for the contracting area to manage such an amount in just one year. Meanwhile, the opposition does not close or veto this proposal. Although there is will on the part of all in this first contact, there is a glimpse, once again, of certain reluctance on the part of the orange formation. There will be a second meeting next Friday. Against the clock, because the accounts should be approved before December 31.

Credits for two work centers on the coast

Despite the extra costs that some groups put on the table, more consensus found the modification of credit of more than 850,000 euros for the urban cleaning work center on the coast to improve the terrible working conditions in which employees have been since 2012 The proposal went ahead without any vote against and the abstention of PSOE, Cambiemos and Vox. The 1.2 million loan for the emergency center in Orihuela Costa was also approved, despite the votes against by Ciudadanos.