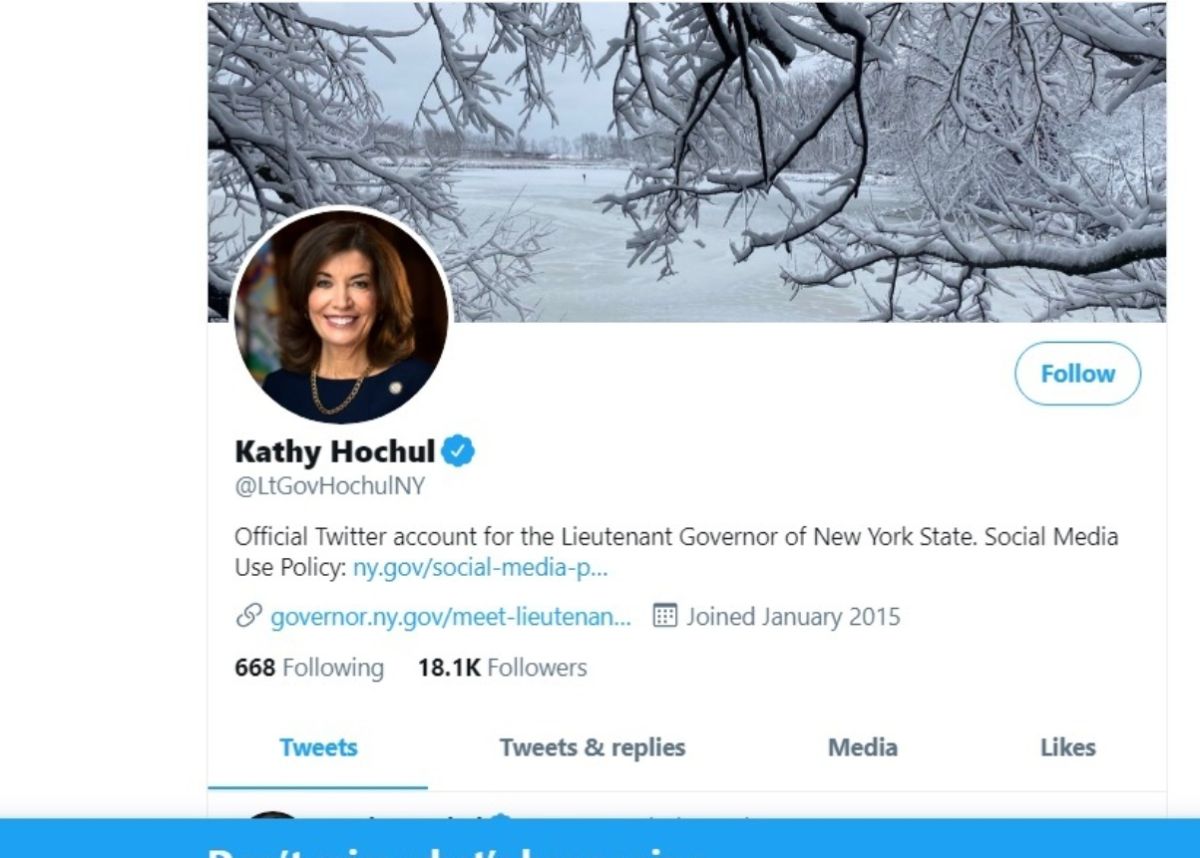 As voices of condemnation and calls for Andrew Cuomo’s resignation grow, so too does support for the possible rise of Lieutenant Governor Kathy Hochul, who would be the first woman in history to lead the executive branch in New York.

Ironically, that feminine milestone would be achieved by allegations of sexual harassment against Cuomo, who has also been questioned by a scandal in theory greater: the mass deaths of the elderly during the pandemic.

NY belongs to the 20 minority states in the country that have never had a female governor. Coincidence or not, regarding International Women’s Day, this week Hochul wrote on Twitter: “New York has been at the forefront of women’s rights and women have led the way in making history.”

In recent days, political support for the lieutenant governor has gained momentum. The 59 state legislators who issued a statement on Thursday asking Cuomo to step down, expressed their support for Hochul, while New York is counting down to approve its budget on April 1, amid the unprecedented crisis of the pandemic.

“We have a lieutenant governor who can step in and lead for the remainder of the term, and this is best for New Yorkers at this critical time,” they wrote, quoted New York Post.

“Andrew Cuomo has multiple allegations of sexual assault and sexual harassment … Kathy Hochul does not,” said Bill Neidhardt, spokesman for the Mayor Bill de Blasio, political enemy of Cuomo, even though they are both from the same party.

Eric Adams, Democratic pre-candidate for mayor of NYC and president of Brooklyn Borough, echoed the sentiment in a similar statement: “I am confident that Lt. Governor Hochul will manage the budget process and that our attorney general will conduct a thorough investigation.” .

The current 62-year-old lieutenant governor would be required by law to assume the position of Cuomo, whose third term would officially end on January 1, 2023. At the moment Cuomo (63) has denied wrongdoing and has not given any public indication that he is considering resigning or even abandoning his desire to run for the position for the fourth time. His late father, Mario Cuomo, was also governor for three terms (1983/1994), until he was defeated by George Pataki (R) when seeking another reelection.

“Kathy is absolutely ready,” affirmed at the end of February New York Post the chairman of the Erie County Democratic Party, Jeremy Zellner. “There is one word that describes our lieutenant governor: tenacious,” she continued, noting Hochul’s ability to appeal to both rural and urban Democrats. “She knows what to do for the people of New York.”

Born in Buffalo (NY) into a lower-middle-class family, today Hochul is a wife and mother of two who received her bachelor’s degree from Syracuse University and studied Law at the Catholic University of Washington, DC.

At the beginning of the 90s, he stopped practicing law to enter local politics, achieving important positions after the fact. In 2003 she was appointed deputy by Erie County Clerk David Swarts. When he resigned from office in 2007, Hochul won the elections to end his term and was reelected in 2010, but he did not end that term as he headed for Washington.

Hochul, who describes herself as an “independent Democrat”, became a Representative in 2011 for New York’s 26th Congressional District, which spans parts of Erie and Niagara counties, beating front-runner Jane Corwin (R) in a special election.

She was the first Democratic Representative in that district in more than 40 years. However, his presence in Washington was fleeting, and as early as 2012 he narrowly lost reelection to Chris Collins (R). This time Hochul was supported by the National Rifle Association (NRA), which seems to have upset his voters.

When Robert Duffy, who served as lieutenant governor during Cuomo’s first term, announced that he would not seek reelection in 2014, the governor gave Hochul the go-ahead.

In her duties as lieutenant governor, Hochul has remained relatively anonymous And she was not even mentioned in the controversial memoir Cuomo published last fall self-praising his stewardship of the pandemic.

When the resignation calls began against Cuomo for alleged sexual harassment, Hochul claimed that “Everyone deserves to have their voice heard and taken seriously.”

Her husband, William J. Hochul Jr., is an attorney who was a United States Attorney for the Western District of New York from 2010 to 2016.

New York has been at the forefront of women’s rights with women leading the way to make history.

Check out these great locations to experience this history and be inspired to take action. #NYWomenLead #WomensHistoryMonth
https://t.co/SqakNVC19o

Great to be joined this morning by the President of the @BuffaloNAACP, Reverend Mark Blue!

We received the Johnson & Johnson vaccine and feel stronger than ever. 💪💪 pic.twitter.com/M6aFTBvH0E

“There’s no question that Kathy Hochul could do the job of governor on day one.”https://t.co/AE84eump0X