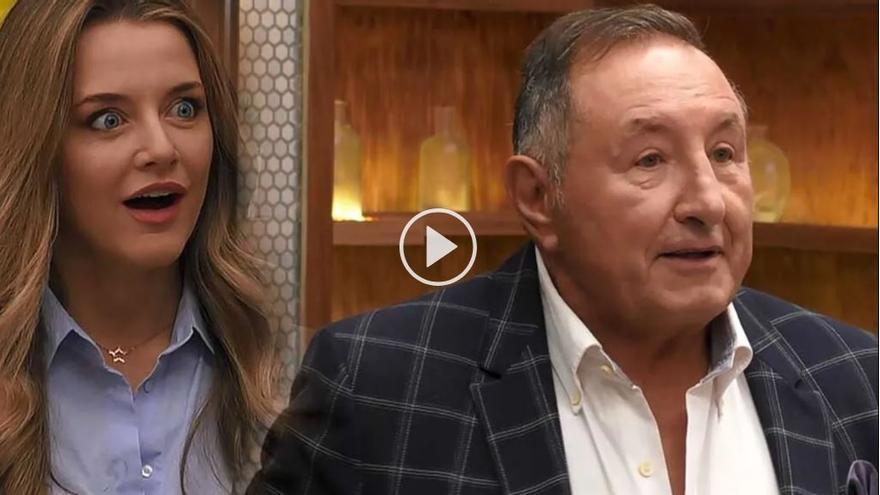 The multifaceted Alicante Pascual Sanchez Espin He went a few days ago to “First Dates Café”, in Cuatro, to see if he could find a new friend. “Long time without seeing you,” he blurted out as soon as he entered the presenter, a Jesus Vazquez that at first he did not remember him, but finally he ended up recognizing him.

After pointing Yulia, the waitress of the program, who had a skin “without a wrinkle”, who was a representative of artists and businessman of nightclubs and entertainment venues, surprised locals and strangers by revealing his secret to keep himself so well at his age: “The sea ​​water, I bathe in the Mediterranean, in the Postiguet, and I drink a day 2 or 3 shots of sea water, is the one with the highest concentration of salts and minerals in all of Spain”.

On the show he met Gines, a person who does not move in the same work circles, which is what I was looking for. However, what caught the attention of the audience the most was his daily dose of shots of sea water.

Is it good to drink sea water?

If movies about castaways, survival reality shows and the adventures of Bear Grylls have taught us anything, it’s that you should never drink seawater. Even if we die of thirst, if we find ourselves in an extreme situation or if we are abandoned in the middle of a desert island drinking sea water is totally inadvisable.

But Why is it bad to drink sea water? Let’s start with its basics. Has it ever happened to you that while you took a dip you ended up swallowing a little water? Well, remember that feeling. Sea water stands out for its high salt concentration. Something that in very small doses, like when someone drowns you or a wave hits you directly in the face, can be unpleasant. But in cases of large intakes, such as if we decide to drink seawater as a drink, the results can be harmful to health.

What happens to the body?

The moment we start drinking seawater, our body would react to the ingestion of a liquid with high amounts of salt. In order to process this extra mineral, the kidneys would start working to filter the liquid, expelling excess sodium through the urine. In this process, we would end up getting rid of more water than we would have initially drunk, hence the danger of dehydration.

Throughout this process, to compensate for the loss of fluids, we are likely to experience symptoms like an increased heart rate, nausea, weakness, and even delusions. And in case the sea water is contaminated, of course the Gastrointestinal disorders they go hand in hand with the dehydration to which we subject the body by drinking seawater.

The origins and survival of the hoax

The hoax of sea water as a remedy for any evil of humanity emerged neither more nor less than in the nineteenth century. It was then that René Quinton, a French physiologist and naturalist began studying the chemical composition of seawater and its effect on the body. With this he ended up creating the famous “Quinton plasma”, a dilution of filtered seawater and supplied to patients to “provide the body with the necessary elements for cellular activity” and “strengthen the immune system”.

The French physiologist advised the use of this compound to treat diseases such as cholera, gastrointestinal diseases, infections and dozens of other ailments in adults and children. A remedy that, in many cases, was considered as a natural and harmless alternative therapy to deal with the ailment caused by chronic pathologies.

Also Read  5,000-year-old hunter-gatherer is the first person to die from the plague | Sciences

No, it does not work

But was it really effective? The answer is no. This has been demonstrated by dozens of studies carried out since the mid-twentieth century on the famous “seawater plasma” that have ended up dismantle the myth of sea water as a remedy for diseases. Today the myth has survived through various alternative therapy gurus who continue to advise the intake of this water as a remedy. On some occasions, as in the case of the ineffective dolphin Diet, sea ​​water has come to be recommended as a remedy for weight loss. A practice not only without any scientific basis but also can be harmful to health.

However, there are many trademarks that recommend the intake of sea water as substitute for traditional isotonic drinks. But even in these cases, the same brands recommend consuming their special “mixture” or “dilution” of salt water, fresh water and secret ingredients, all of which have gone through long processes of analysis and filtering in order to finally be able to enjoy the benefits “of water natural”.