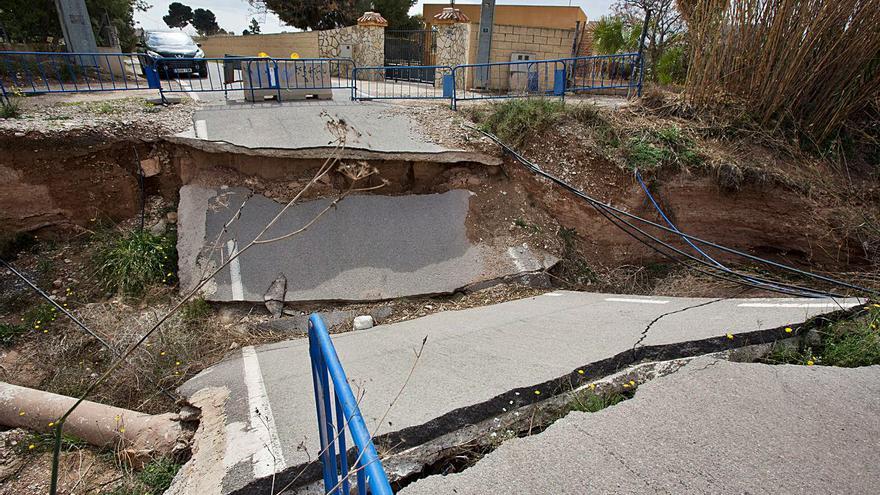 The Way of the Molineta, in the Fenollar Gorge, It has been disabled since September 2019. Then, the DANA that devastated the Vega Baja caused one of the main roads in the Alicante district to collapse, where some 1,800 neighbors. The City Council, a year and a half ago, put up some fences, marked the area … and until now. The collapse of that road forces hundreds of residents of the area to adtake a detour of up to 15 kilometers to get home. The problem, however, began to show some time before: Another flood broke the containment dikes on the Alcoraya highway, which, according to the neighbors, forced all the water to circulate under the Molineta when there were heavy rains. From the outset, the City Council promised to set up an “urgent” departure to find a solution to the road’s collapse. Today, a year and a half later, the path continues the same or worse than then. Municipal sources assure that the work will be included in the first modification of the Budget, which has not yet been definitively approved.

This is one of those arrangements, with greater or lesser importance, that last forever in Alicante. In this case, it is located on the outskirts, but they also occur in strategic points of the city, although of a different depth. In the Central Market of Alicante, Since the end of last year, one of the two escalators at the entrance to the Plaza del 25 de Mayo (known as “de las flores”) has been useless. Yellow signs inform that it is “under review”. That’s already done four months, as criticized by market users on social networks, especially on Saturdays, the day with the largest influx of clients from the municipal facility.

Among the most insistent, the municipal spokesman of Compromís, Natxo Bellido, which almost every week remembers, through its personal account, the situation of a staircase that, above all, facilitates accessibility for people with mobility problems. Bellido even warned at the end of February that the situation had gotten worse: «Now the two stairs are not working again. And it’s been two months like this». Now, in mid-March, one of them is working. On the other, no positive news to date. Municipal sources allege that the ladder is unused because they are waiting for a piece to arrive. They also add that they are studying changing all the stairs due to the continuous problems in their maintenance.

Neither is anything known about a section of the Esplanade that is being ignored in some works that were recently promoted to eliminate a multitude of areas with “bald spots”. This point is on one side of the promenade, near the intersection with the Rambla. And the problem is not new. In fact, that area was already without tiles when the City Council placed the Christmas tree in early December. When he removed it, everything was still the same: fenced and without pieces of the tricolor marble. The City Council hopes that the settlement will arrive shortly, since -they emphasize- there is an operator assigned to take care of the ride.

A few meters away, the two sculptures on the Esplanade accumulated almost a year in precarious conditions, with a wire that held the base so that it would not collapse. Not far away, it also took months for the bipartisan to fix a broken window on the Postiguet walkway from Paseo de Gómiz. In that tourist environment, the fountain in the Plaza del Ayuntamiento has not been used for more than a year after the cremà of the Official Bonfire “melted” the mechanism. It was said that a solution was being studied. Until today.