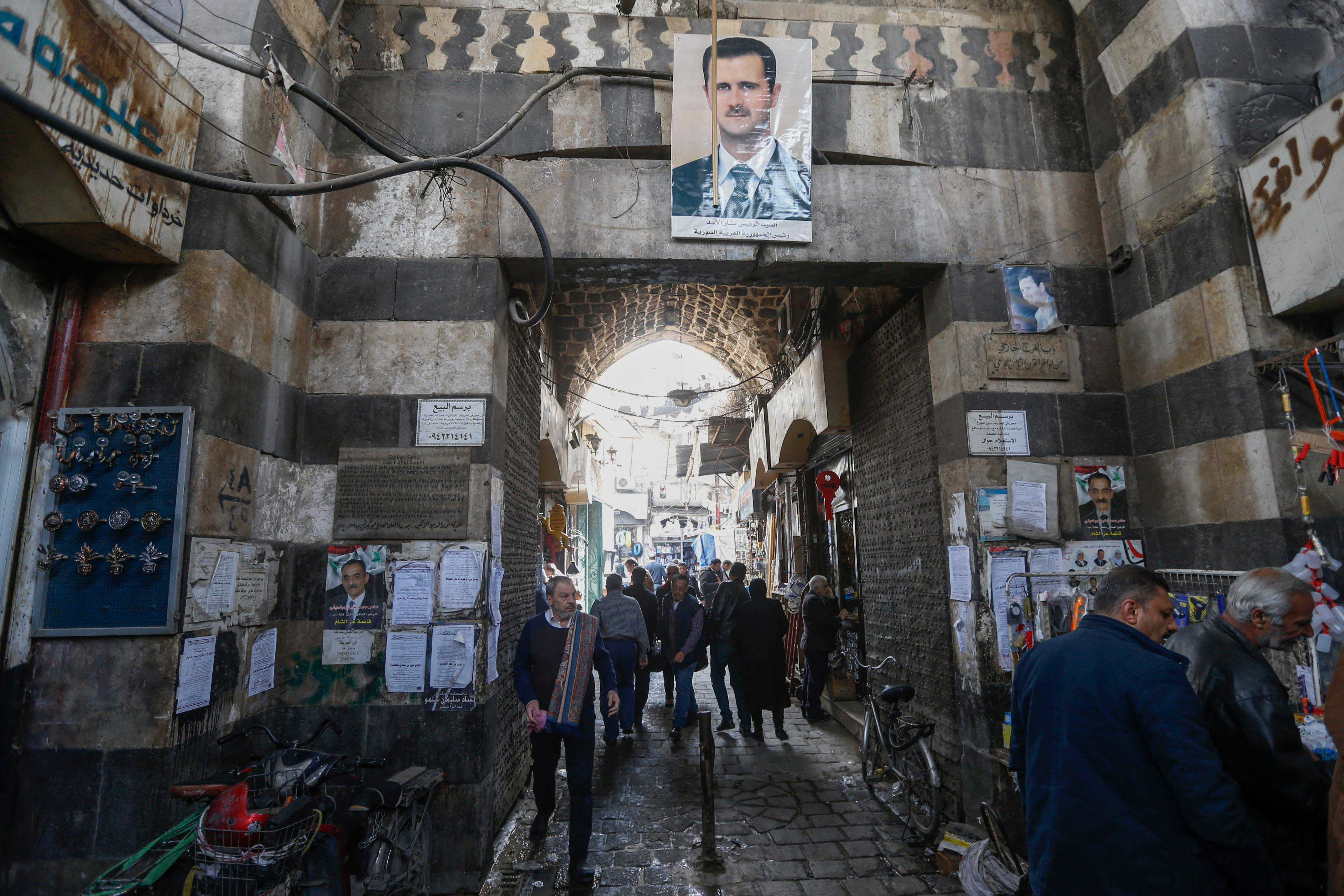 The crossing of the land border between Lebanon and Syria gives a sample about the state of a country that celebrates 10 years of conflict. Drivers arriving from Beirut no longer ask which route is safe, but instead park on the shoulder when they reach the no-man’s-land that separates the two countries, extract the gasoline from their tanks and sell it to Syrian drivers in jugs of plastic. Eighteen liters cost 35,000 pounds in Syria (8.75 euros), four times more than in Beirut, explains a driver. In the streets of Damascus, the Syrian capital, with more than two million inhabitants, endless lines of cars wait next to gas stations, sometimes more than three hours.

They are the reflection of the ravages of the civil war. The Syrian pound has lost almost 99% of its value against the dollar. At a border, closed by the covid, you hardly see some citizens with dual Syrian-Lebanese nationality, diplomats or UN workers. The informal money changers who once swarmed with wads of bills in their hands have disappeared. Now they would need wheelbarrows to transport the equivalent of 1,000 euros.

Busy illegal smuggling routes start from Lebanon to sell fuel in Syria, but also rice or medicines. “This year has been very hard for us. We can barely make ends meet or heat a room in the house with fuel, ”says Ahmad (who does not give his last name for fear of reprisals), an official in his fifties in Damascus. “While most of us get poorer, a minority of privileged members of the regime get richer,” he adds.

Despite the general apathy due to the economic crisis and the pandemic, the streets of Damascus breathe a strange normalcy reminiscent of the prewar bustle, with an army of street sweepers cleaning the asphalt, hurried workers running after buses and unemployed youth. that meet in the parks, where they incur no expense. Bars and restaurants are also busy, but for that upper-middle-class minority who can still afford that luxury. The average salary of an official is around 60,000 pounds – about 15 euros in informal exchange – in a country of about 18 million inhabitants (more than 5 million are refugees abroad) where 8 out of 10 Syrians, according to the UN, live under the poverty line.

With no customers, dealers from the prized Syrian marquetry have set up their tables and chairs on the sidewalks to play long games of taula, a popular board game. In the midst of the hustle and bustle of the city, you can hardly see a mask. “Covid? Blessed are those who take it and die, who can finally rest ”, says a merchant sarcastically.

“We need a strong president, because otherwise the institutions would collapse”

The fear of hunger ends up overcoming the fear of dying from the virus; many Syrian workers are paid by the day to survive. There is no shortage of food in supermarkets, but there is money in pockets after a fight that has caused half a million deaths (a third of them civilians) and has destroyed 27% of homes and half of infrastructure, according to a World Bank report.

The fear of expressing political ideas in public is also still present. Only those who support President Bashar al-Assad dare to speak up. Every foreign journalist who manages to enter the country is accompanied by an employee of the Ministry of Information (in this case during a brief stay authorized to interview the Iranian ambassador, one of the important actors in the conflict). “Reality abroad has been greatly distorted, to such an extent that refugees have to plague the country and the president to give them money,” defends Munir, a 32-year-old computer scientist, in WhatsApp conversations from the periphery of Damascus and whose cousins ​​fled to Germany.

“We need a strong president, because if the institutions would not collapse and from there we would never be able to go back over the country,” he says. The citizens of Damascus still keep fresh in their memories the years lived under the rain of mortars launched from the rebellious suburbs which, in turn, were crushed by the bombings of the Government and one of its allies, Russia.

Assad has served 20 years at the head of a republic that he inherited from his father, Hafez El Asad, in 2000. Half of them have spent at war since the outbreak of the first popular protests on March 15, 2011, brutally repressed. In less than six months, the country was plunged into a bloody civil war. Today, Assad and his Russian and Iranian allies are in the winning field.

It was precisely the Russian fighters that in 2015 tipped the balance in favor of Assad when the insurgents were at the gates of the capital. And before them, in 2012, it was the Iranians who came to their aid by deploying a network of strategists and militias on the ground, including the Lebanese Hezbollah. “The victory in Syria has been crucial for the rest of the world because if the terrorists had not been stopped, they would have spread,” says Iranian Ambassador Javad Torkabadi in the Syrian capital. By terrorists he refers to all armed opposition groups.

The diplomat asserts that there is no political solution other than an internal negotiation between Syrians. “The war has dragged on for a decade due to foreign interference in the country,” he says, without considering Iran a power that has intervened from abroad because, in his opinion, it does not interfere “in the country’s domestic affairs.” The regular Syrian Army has regained control of more than 70% of the national territory, when in 2014 it barely retained 45%.

Iran does not think of a withdrawal in a scenario in which Turkey is also intervening in the north against the Kurds and Israel is trying to get Tehran out of Syria. “He will stay in the country and will continue to support the Syrian people and the legitimate government,” the ambassador assures.

“Russia and Iran are strategic allies,” says Syrian expert Joshua Landis on WhatsApp from the United States. “Of course, Iran is a theocracy and Russia is not, so they have divergent ideologies. But these differences are not essential to the common goal of maintaining the survival of the Syrian regime, “he adds.

Torkabadi avoids taking stock of the cost that a decade of supporting Damascus has incurred for the Persian power both economically, militarily and in the lives of militiamen and soldiers: “We defend our beliefs. It is a small effort for a great Syrian victory, ”he adds.

As for the financing of the reconstruction of the country, neither Tehran nor Moscow have moved at the moment. The inhabitants of Damascus face the crisis as best they can. At dusk, the purring of electric generators becomes the soundtrack of a city that resigns itself to daily cuts of four hours for every two hours of light.

Next April, Syrians are called to the polls to hold a presidential election that opposition activists have called “illegitimate elections” in a campaign on social networks. What position will Iran take if Bashar Assad loses the elections? “Iran will respect any result that comes from the polls,” says Ambassador Torkabadi. Although a part of the population will not be able to vote: neither the more than five million refugees, nor the three million inhabitants of the Kurdish area of ​​the country, nor many of the inhabitants of Idlib, a province partially controlled by jihadist groups from the orbit of Al Qaeda.

“The sanctions [de Estados Unidos y la Unión Europea contra el Gobierno sirio] They are not going to force El Assad to hold real elections. Assad said that he would burn the country rather than be overthrown, so he will not let anyone beat him in the elections after winning the military battle, ”says Landis. “The people will continue to be caught between the regime and the sanctions of the West.”

Despite the sanctions, the Iranian diplomat assures that to get Syria out of the hole, all help is welcome, also looking towards Asia or “any actor who wants to help.” Regarding the expectations created by the entrance of Democrat Joe Biden into the White House, he affirms that Iran expects “a new approach to American politics.”