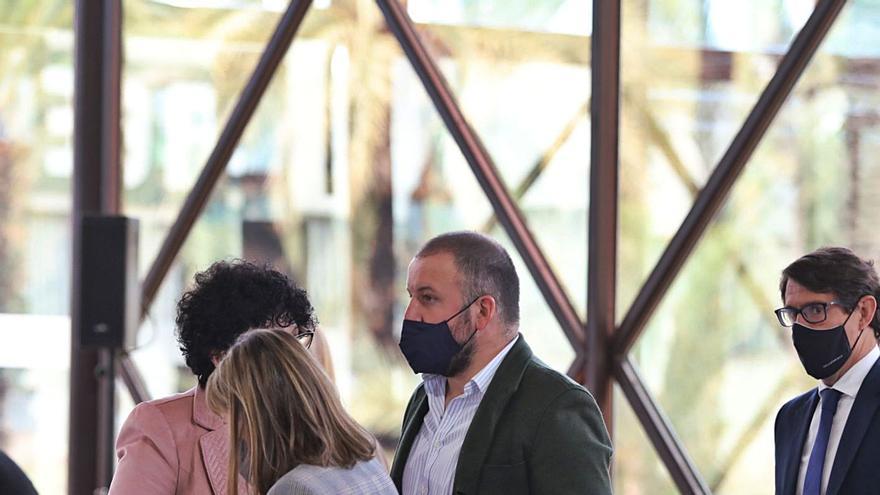 “About the size of the sun: the width of a human foot.”

There was an unusual expectation among the citizens of Elche to see what the return of the municipal corporation to plenary sessions in person would be like, the return to face-to-face sessions, without that interrupted sound, those images that freeze and the children who claim the leading role (on screen or off) in full argumentation of the parent. Curiosity increased in large part by the choice of the El Bailongo room for the celebration of the corporate reunion and not the congress center, where until now the conclaves had taken place in the covid era. The chosen place, where so many people in their third youth enjoy giving rhythm to their life and capering on the track with their partner, would it be a good omen of a return with a new spirit of harmony and understanding on the part of their lordships, with the possibility even close-up and the occasional rub on the track, even if it was with the protection of the mask?

There were those who were already imagining the popular Pablo Ruz addressing the socialist Patricia Macià in these terms: «Graceful and diligent guardian of the municipal treasury, peerless champion of the remnants of the treasury and champion of the budget execution, star of my supervision and virtuous of the recognized expense, will you grant me this dance, and incidentally a tax reduction, even if it is just the IBI? ». “We can dance, but nothing stuck, let the air run and without touching the tax ordinances, I know your intentions,” would argue the mayor, not prone to cajoling.

During the plenary session, many expressions of joy for the reunion were expressed, as well as hints of foreplay and some timid touch, but the approach did not pass to adults, because a part of the audience preferred music to dance together, another demanded pasodobles and a third he opted for Hispanic indie. It is also true that no matter how much they wanted to meet again and no matter how much attachment they felt, the anti-covid regulations and the imperative ventilation prevented the glued dances. So while there were some mischievous sidelong glances or overtly suggestive glances from one band to another, no one dared to bring out any component from the opposite flank. Perhaps in this way some vain controversies that occupied a good part of the plenary session would have been settled. It is already known that dancing together is making a pact.

And it is that in this interruptus reunion it soon became clear again, in case there was any doubt, that nothing had changed during the diaspora, and that both now in person and before telematically, the members of the local corporation continue without agreeing on what who agree. In the previous session it happened with the request for European aid for footwear, and in this one, with the defense of the Tajo-Segura transfer. Did it matter a lot if municipal support was manifested through an institutional statement without debate or a motion supported unanimously by all but with debate? Well, for the bipartisan and the PP yes, and a lot.

The local government (more specifically the mayor, Carlos González) defended the first formula with the emphasis that characterizes it, mainly because under the excuse of the institutional declaration it avoids criticism of the central government for the harmful effects of its actions or omissions in the referred subjects. On the other hand, the popular, through the mouth of the persistent Ruz, demanded the motion of the motion precisely for that reason, to be able to distribute tow and not friendly epithets to Pedro Sánchez’s team, as it finally happened. Although then hairs to the Vinalopó and approved unanimously. That is, the order of the factors does not alter the product, but sometimes the alteration is the product of the factors of the order (of the day).

And since the alteration of the factors comes up, I must confess and confess that, as a neighbor, I do not feel any attachment to the Cross of the Fallen and, therefore, from the outset, I do not care if it is demolished or not. Call me uprooted (and even renegade), after my childhood spent playing guide and horn around this unfading monument, and continuing to run into her day in and day out since then. In other words, no one is more prone to attachment than I am. But the attachment I do not feel. I am sorry. In any case, as it seems that it will be a recurring theme in the months that lie ahead (and especially next year), for the sake of the Passeig de Germanies remodeling project as a result of the opening to the public of the underground shelter , I will have time to opt for one or the other option. Or to continue in the group of abstentionists, a dangerous position in these polarized times.

This confession comes from the fact that, in case we were lacking some more stimulus in this pandemic pandemonium, a new political-social controversy seems inevitable at the cost of the eventual withdrawal of the aforementioned cross. The municipal spokeswoman for Vox, Aurora Rodil, already warned in the Bailongo session that her formation will be, how could it be otherwise, next to those who oppose the demolition and even harangued the conservatives (of the monument) to rebel against the foreseeable outrage of the atheistic, iconoclastic and detached left. “The cross will prevail,” he prophesied. And the popular Juande Navarro said amen (in addition to an Our Father). We are warned.

The bipartisan defends that it is not to remove to remove, but to remove within a project that includes musealizing the refuge and transforming the square into a new space dedicated to Human Rights. And of course, the cross erected to honor the deceased of the victorious side in the civil war, as it does not fit very decorously in that spirit (or perhaps yes, if you give some thought to the matter of reconciliation). And then there is the law of historical memory and such. They will be whatever, they assure, but not crucicides: there are, if not, the medieval term crosses scattered around the city to support it.

It will not be the first attempt. Since the 80s of last century there have been several threats (unsuccessful, as is evident) by socialist governments to eliminate the Cross of the Fallen, which even gave a popular name to this entire area of ​​the Pla. By the way, my good friend the historian Miguel Ors (who will surely get into trouble when they ask for a report on this matter), told me that the Francoist city council was about to baptize Carrús as the neighborhood of the Fallen (by God and for Spain, of course), but since they lacked streets for so many names, they had to distribute them to other areas of expansion of the city, so that some were not going to be less down than others, and fortunately they gave up.

The impetus of the democratic restoration only reached to eliminate the yoke, the arrows, the marble altar and to recover the historical name of the walk. Later, despite new proposals for demolition by the most left-wing councilors, it was decided that the cross would remain as a tribute to those who died on both sides during the civil war. And so it has continued until now.

The controversy, then, will be inevitable, not only between the neighborhood but above all the political-social, in case we lacked animation. The emergence of some platform, association or consortium type Salvemos la Cruz (I do not know if the monument is of a rationalist style, like the central market), plus the consequent complaints before the Catalan Ombudsman and even the courts, cannot be ruled out. Lord, what a cross!