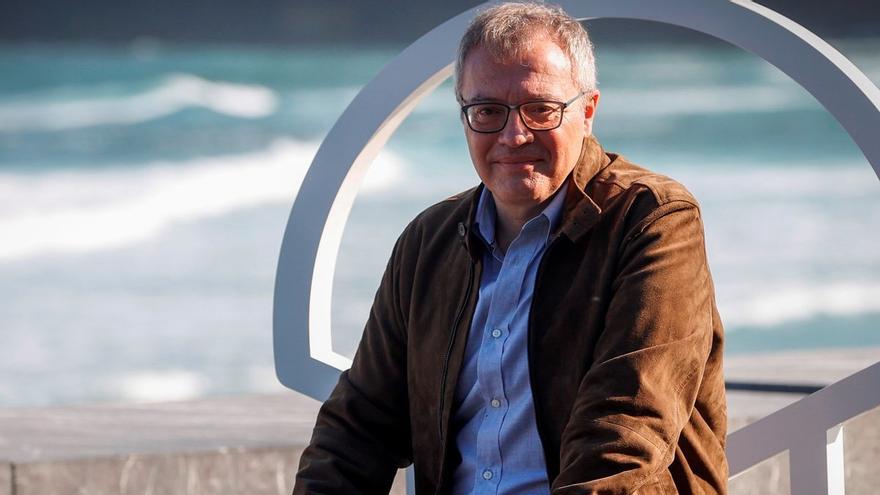 Daniel Monzón (Palma, 1968) continues to explore different genres every time he makes a film. The prison drama in ‘Cell 211’, the action thriller in ‘El Niño’, the musical comedy in ‘Yucatán’ and now the quinqui cinema in ‘The laws of the border’, a contemporary review of those crime stories that captured in real time the B side of the Transition.

-In some way, the borders have been present throughout all your filmography.

-You are right, even from ‘The heart of the warrior’, in that case between reality and fiction. I think I have a fondness for characters who are outside the law, I feel very close to them because they dare to do things beyond the conventions.

-What attracted you the most about Javier Cercas’s novel?

-When I read it I felt an almost autobiographical emotional connection. I was ten years old in 1978 and I lived, like the protagonist of the film, in a house at the end of the city. From my window I could see the open spaces, where the quinquis were, and I was constantly crossing them. They were figures that caused me fear, but also fascination. Deep down I thought: I would like to be a bad guy and live with the freedom they have.

As a director, I was attracted to recreate the Spain of that time, also to review the quinqui genre, but from a different perspective, that of someone outside that enters that world, which is, after all, what I always do in my life. movies, like in ‘Cell 211’, that you put yourself in jail with a clean look, that of the spectator himself. One thing was clear to me, that I would never judge my characters.

-The title of the film has a western scent.

-After all, we are describing a society with its own laws. I think the story has certain connections with ‘The man who killed Liberty Valance’, which began with a prologue and an epilogue that gave the keys to the story, as in this case, and made you see how much there was truth and lie in the characters. Also, in the western, there was a certain mythologization of the criminal, like in gangster movies, like in ‘Bonnie & Clyde’, which brought a very ‘cool’ approach. The figure of the outsider was very romanticized, even in our ‘Stray Dogs’.

-However, we find a clear parallel between that Spain and the current one

-From those muds, these muds come and talking about that Spain of ’78 and telling what it was like confronts you in the mirror of reality. Borders are more present than ever, and especially with regard to social classes, which establish very defined limits. The character of El Zarco has a very clear awareness of his tragic destiny and is aware of his place in the world, he knows that he cannot change it.

-How do you think Spain has changed?

-Well, I think that along the way we have lost part of our authenticity. Now our cities are like any other in Europe. Nothing has a soul, it is a Spain made up, they have painted it, now everything is organic and cute.

-How was the adaptation process?

-There were many ways to adapt Cercas’s novel. Jorge Guerricaechevarría and I have focused on youth, on adventures, to add an aside with some adult characters who relive those moments that changed them forever. For a moment, it occurred to me to make a kind of ‘Once upon a time America’, by Sergio Leone, divided into two parts, adolescence and maturity, with overlaps between the two times. But we have tried to introduce this same idea into the film, with those final doses of reflection.

-What do you think of the quinqui genre? How have you tried to update it?

-The quinquis are our legendary bandits. But those films were shot at the same time that this present was reflected, they were a glimpse of reality, they were almost documents with a neorealist spirit. Now that’s impossible, so I asked myself, how do I do it? I could have made a Mannerist quinquis movie, with stripes and grain, a la ‘Grindhouse’ by Tarantino, but it didn’t make sense. So I opted for a romanticization, a stylized, nostalgic recreation, which is something implicit in the protagonist, who remembers that time as the most intense of his life.

– For you, what did the quinquis symbolize?

-They were the B-side of that time, all those people who piled up in the suburbs of big cities looking for a job that they would never get. The democracy party was being celebrated and they had not been invited, so they took the law into their own hands, started a rebellion and lived quickly, quickly: if you don’t love us, we don’t want you either. They were the only ones who stood up to the police and the institutions that still maintained the legacy of Francoism.

-How was it to rebuild all that time and capture it?

-I was lucky to have Carles Gusi as cinematographer, who worked on ‘Perras callejeras’ and ‘Yo, el Vaquilla’, so he knew perfectly the aroma of quinqui cinema. And we wanted to give all this a monumental character, through the image, the sound treatment, the music. As a tribute in a big way.

-In that sense, the soundtrack is essential

-There is a combination of themes of the moment, such as’ The forbidden garden ‘, by Sandro Giacobbe,’ I’m loving you madly ”, by Las Grecas, ‘La Grifa’, by El Pelos or ‘Alameda’s Blues’, by Smash. But at the same time I wanted the film to have its own romantic rumba so that it intensified the tragic feeling of the character. In this sense, the band Derby Motoreta’s Burrito Kachimba has been fundamental in creating the sound look, halfway between the past and the present.

-It also contributes a vision of women different from what was offered within the genre.

-Except for ‘Hurry, hurry’, the portrait that was made of the woman was very subsidiary, but here the engine of the story is Tere. She is a very powerful aunt, very strong, very magnetic and she is not afraid to be in a world of men, because she treats them as equals. She is a survivor.

-How did you find the young people in the film?

-We could no longer count on real quinquis. We only spoke with El Pera from that time, who told us many things, about how the police took out the submachine gun at the first turn. At least we tried to make them fresh faces and to set up the band we looked directly in the streets and in the dormitory towns for inexperienced kids who gave the camera a lot of truth, a lot of rogue spirit.

-In the film all the styles of the genre appear.

-The bag pull, the discos, the brothels, the car chases, the recreational … It is a whole mythology, it had to be faithful, but at the same time I have tried to reflect on the genre 40 years later. Now I see everything in a more emotional way.