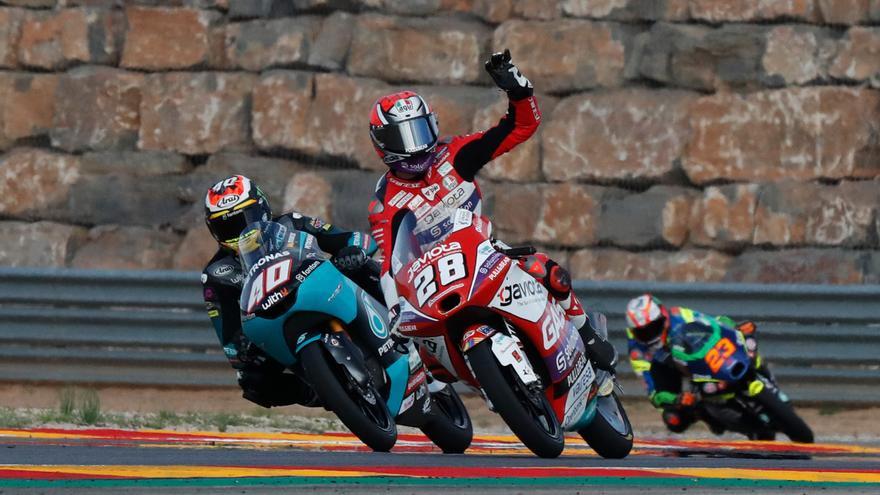 The South African Darryn Binder (Honda) he sentenced the official classification for the Moto3 Aragon Grand Prix at the Motorland circuit, in Alcañiz, in just two laps, which he needed to set his personal fastest lap, which none of his rivals could beat.

Precisely Tatsuki Suzuki (Honda) and his compatriots Ayumu Sasaki (KTM) y Kaito Toba (KTM), next to the czech Filip Salac (Honda) They were the ones who went from the first classification to the second and this despite the fact that Toba had a mishap at turn seven, although it was at the end of the session and forced his mechanics to work hard to try to be ready to dispute the second classification.

A goal that they met with great speed and diligence, but as soon as they hit the track, Kaito Toba He again suffered a new mishap on the fourth lap, when he was sixteenth and that ultimately relegated him to the last position of the session.

Suzuki He was very clear at all times and the truth is that with his record of 1: 58.345 he achieved a “comfortable” pass to the second classification, so three minutes after finishing the first he decided to enter his workshops and take a little break while his rivals struggled on the track to achieve classification.

An objective, that of the classification, that they did not achieve or Adrian Fernandez (Husqvarna) ni Carlos Tatay (KTM).

Binder He set a best time of 1: 57.724 that none of his rivals could overcome and that the South African decided to take some time to make last minute changes to his motorcycle.

Meanwhile, the world leader Pedro Acosta (KTM) was one of the ones that took the longest to hit the track, as did his teammate Jaume Masiá, and therefore the last to set a benchmark record, although on his first attempt Acosta placed fifth, with Masiá thirteenth, who later improved to move up to tenth place, but still with riders on track with options to improve their personal best.

The last step by goal produced some changes, not the leader, who stood firm with Darryn Binder, worse yes after its wake, where the Hispanic Argentine Gabriel Rodrigo finished, followed by Tatsuki Suzuki, the one he beat in the last lap, with Sergio García Dols (Gasgas), fourth, in the same vein as the Italian Andrea Migno (Honda) and the turkish Denis Öncü (KTM).

Pedro Acosta finished in the third row, with the ninth fastest time, behind the Spanish Jeremy Alcoba (Honda) and italian Niccolo Antonelli (KTM).