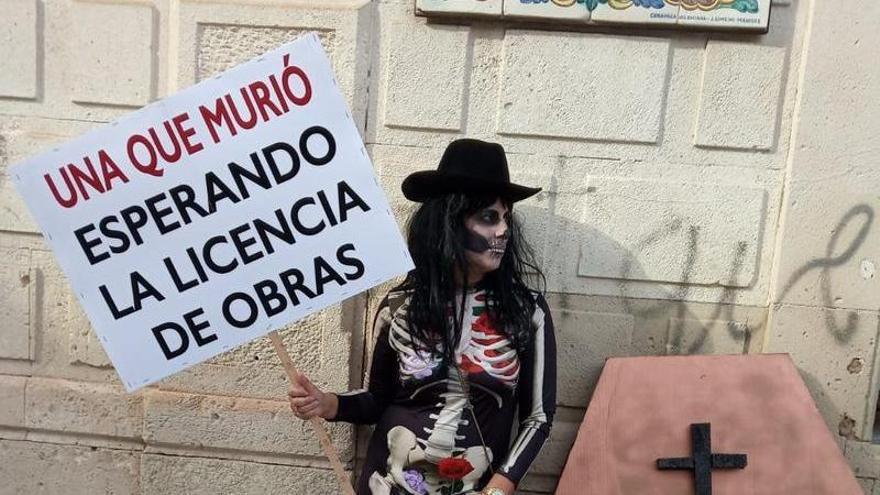 He did not know whether to make his protest naked or disguised as death, and in the end he thought that from the first one he might end up in the Civil Guard barracks. So she opted for the role of “La muerta” and thus asked the newspaper to tell her story, “como la muerta”, although everyone knows who this versatile artist is in Crevillent. Neither short nor lazy from first thing in the morning she went to the door of the City Hall in her disguise. “One who died waiting for the building license,” reads the poster that accompanies her along with her skeleton costume (crowned by a black hat, of course) and the silhouette of a grave. It goes without saying that yesterday there was no talk of anything else in the municipality.

Like so many stories, his dream began during the pandemic. “He lived in a small house and we decided that it was time to buy our first home, something bigger where we could be more comfortable,” he says. They chose a site very close to the city ​​Hall, which had been the headquarters of the casino and which had been pending construction for at least two decades. It is in the heart of Crevillent and perhaps that is the problem and the slow bureaucracy. They looked for an architect, project, financing … and they went to the Crevillent Town Hall with all the documentation. “I have been waiting for ten months but I know that there are people who have been one and two years. I never thought that this could end like this,” he recalls with some sadness while guessing if tomorrow Thursday he repeats at the door of the City Hall, with the same or with another outfit , given the impact it has had. “The dead woman“She assures that many have stopped to talk to her, including councilors from the government team, against whom she has nothing, rather the opposite,” although if there is a problem in the technical office and it is collapsed, what they will have to do is to solve it but people cannot be like this for so long “.

His work does not advance because between paper and paper, answering and replying, they spend an average of four months “to exchange a few words” and he has begun to despair so slowly. “I’m tired of making complaints and asking why my license does not advance“, she says with a certain weariness, while remembering that” I am one more, there are many people who are like me, but they do nothing. When I told someone that I was going to ask for a license he told me: You are crazy! And it is true because this is not progressing. “Members of the government team, quite astonished, had the opportunity (only if you want to see it that way) to talk to “the dead woman”, face to face, and ask her, be interested in her case and perhaps ask her for patience. It is what one always has when one sees death, that one is not in a hurry to meet her again, and perhaps thus It goes to this neighbor from Crevillent who hopes that her initiative will serve a purpose.