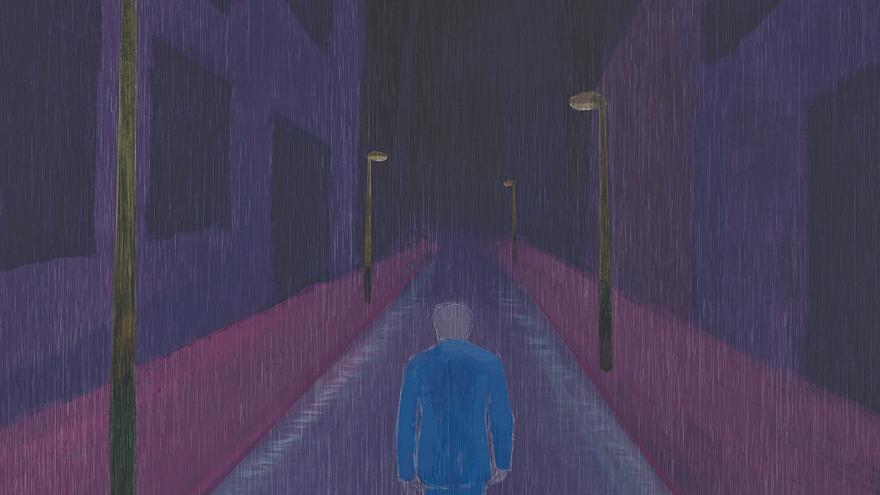 In the early morning of Saturday, October 17, 1970, the octogenarian Trinidad left his house, located on Villavieja Street, dismayed, in pajamas and barefoot, despite the great storm that was flooding the streets of the city. He was a tall figure, slim and stooped, with a graying beard and an absorbed look. One thought haunted him: rescuing Eugenia, his 8-year-old granddaughter, who had just been kidnapped by three erinias. She had been flown out of the window of the room in her house, where she slept.

Alicante had 184,716 inhabitants, but only he wandered at those hours through the flooded and dark streets. The public lighting had broken down and the storm was moving away, letting the rain and wind die down. But the avenue of water circulated increasing and with force through the streets that ended at the port and the Postiguet beach.

THE YOUNGER SISTER OF DEATH: CLIO AND THE FLOOD

Despite the fact that the flood was dangerous in some places, such as at the end of the Rambla, Trinidad crossed the Plaza del Mar and walked along the Esplanade with determination, sometimes the water came up to her knees and having to hold on to everything in her reach, trees, benches, wastebaskets, so as not to be swept away by the water. He was going south because it seemed to him that his little granddaughter had been taken that way.

Trinidad was vaguely aware that he was in the middle of a cataclysm, a word that he recognized as very appropriate since it derives from another Greek that means flood, but he did not stop advancing, coasting, despite the intense cold that he began to notice throughout his body . He did not care about the cold or the rain or the flood. The only important and urgent thing was to find her granddaughter as soon as possible and save her from the clutches of her captors. It was his obligation as responsible for what had happened. The erinyes acted by divine command when a crime had been committed against the family, and although he did not know the nature of the crime that had motivated this punishment, he knew that he was responsible. No one but himself should be blamed for this misfortune.

THE YOUNGER SISTER OF DEATH: CLIO AND THE FLOOD

At the end of the Poniente dock, he saw a boat shaped like a gigantic chest that swung around. A woman on board watched as a man untied the rope of the proís. Seeing Trinidad, she yelled at him:

Trinidad stopped about twenty meters from the boat. Once the unmooring was complete, the man prepared to climb aboard a ladder that swayed dangerously. But he turned to look at him and invite him with a wave of his hand to accompany him.

The old man recognized Deucalion and his wife Pirra, who were about to take refuge in his ark to escape the flood.

“Thanks, but I have to look for my granddaughter,” he yelled at them; and he kept walking south with the water above his ankles.

It had stopped raining, the sky was beginning to clear, and Nix, the Night, was preparing to give birth to a new day, when Trinidad saw several sheds on a beach that served as a shipyard. He stopped to watch them from fifty yards away, with the help of the light provided by the pregnant and reappeared moon. A man came out of one of the sheds with a torch. He was dressed in a turban and wore a djellaba. When he saw him, he remained still, looking at him, until finally he greeted him with a raised hand and his voice:

Trinidad responded by raising a hand. For the first time he did not know what to do. Should I continue south? Should he seek shelter in that place? Should he go home? I was tired and shaking. Then someone called him behind him, joking at him.

He turned and saw in the middle of the road a hooded girl who was bundled up in a kind of light-colored cloak and wearing wellies. He gestured for her to follow.

“I’m looking for my granddaughter.”

“You won’t find it if you get sick.” He is shaking and looks very tired. Come with me.

After inviting him to follow her, she set off. On his back he carried a small backpack and a sheathed guitar.

Trinidad followed her steps, returning the way she had come. He trusted this girl because she was not entirely unknown to him. He thought he remembered her having seen her somewhere, at some point, perhaps in a photograph or in a painting. On the maritime horizon, Eos opened the gates of heaven with his pink fingers, so that his brother Helio’s chariot could come out.

The Alicante where Trinidad lived had 78,507 homes, but the city that he found when he returned down the road, following the hooded girl, had far fewer buildings. In fact, it was no more than a village. A few dozen houses were scattered on the slopes of Benna Laqanti, at the top of which was a smaller citadel than the one he knew.

Near a small ravine, Trinidad suddenly found a very tall tower that, inexplicably, had gone unnoticed by him until then. It was over a hundred meters high and was crowned by a golden sun that was beginning to reflect the timid light of dawn, as if preparing to welcome the star in which its creator had been inspired. He continued walking and left the tower behind, but, a few steps further, he turned his head to see it because he believed he had recognized that building; however, the tower had disappeared and in its place was nothing but a ruined ceramic kiln. Surprised, he stopped, remembering that ancient warning that the spirit of man is made in such a way that it captures the imagined better than the reality.

The girl encouraged him to keep walking and, looking at her, saw that she had removed her hood. Her long, wheat-colored hair, haloed by the bright red of the sunrise in the background, was adorned with a simple diadem of bay leaves.

–Tell me, Clio, how can I find my granddaughter? –Asked the old man when he recognized the girl’s true identity.

“You’ll find out in due time.” But now you must rest and recover. You can’t face your destiny like that, ”Clio replied, before continuing the march.

When Trinidad resumed the path in the footsteps of his guide, he saw a column of people leaving the nucleus of houses, following a path that led inland. He estimated about three dozen people. Some were riding in two wagons, while the majority were on foot. The six horsemen were warriors. All were dressed in Arab clothing. When they passed them, it seemed to Trinidad that the banner on the first of the wagons was that of the Banu Savy family. He even believed he recognized Mohammed ibn Al-Sayj Al-Aslami, governor of Laqant, who was imprisoned along with his son Aslami and the rest of his family towards Qurduba, to know the punishment that his rebellion deserved from the mouth. from Caliph Abd Al-Rahman III himself.

When he looked back in front, Trinidad realized that he had lagged behind Clio, who was waiting for him some forty paces away, encouraging him with her tender and determined gaze to keep walking. Helio had already left the sea and was ascending through the sky mounted on his chariot drawn by four steeds, illuminating the earth with the rays that his golden hair gave off. Arriving near Clío, Trinidad noticed the sudden appearance of some walls that surrounded the medina of Laqant, whose name did not come as the legend of some unfortunate lovers called Ali and Cántara, but from the ancient Roman city of Lucentum, located in the Albufereta; in the same way that Alacant, in Valencian, and Alicante, in Spanish, came from Al-Laqant.

Before reaching the entrance to the Almohad medina, they passed a mosque on the left, which had attached bathrooms and was surrounded by a cemetery and a souk in which dozens of men and women sold the products of a nearby orchard, as well as others brought from the field and the sea.

After ascending a steep slope, Clío and Trinidad passed through the main gate of the medina, which had an arch with inscriptions from the Koran. They continued along the main street, which ran through the entire medina and ran parallel to the wall that bordered the sea. There were 400 houses where 2,500 people lived, but Clío had no difficulty in finding the one he was looking for. It was on the same main street and Trinidad calculated that it stood on the same site where many centuries later he would build his own house. A little further on was the main mosque and the main souk.

Both of them stopped in front of a closed gate and Clío encouraged the old man with his gaze to call using the knocker, which was shaped like a lizard, or better yet a lizard, not in vain the name comes from an Arabic word that has that meaning.

Trinidad knocked on the door with the piece of iron and, while he waited for the call to be answered, he turned his grateful gaze to the girl, but she had disappeared. He looked up and down the street, but saw only several passersby dressed in Arab clothing.

The gate opened and Trinidad found herself facing Bernarda, her servant for three decades. Suddenly he felt faint.