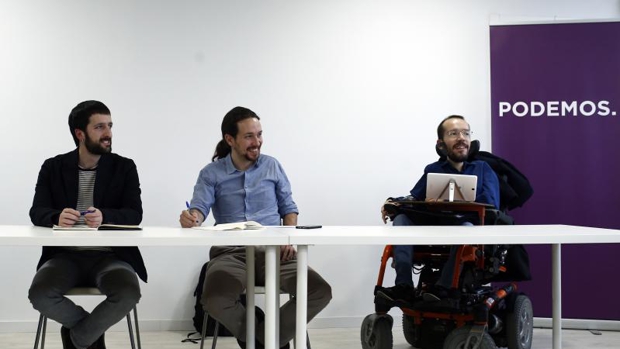 The Secretary of Communication of Podemos and right-hand man of Vice President Pablo Iglesias, Juan Manuel del Olmo, defended this Friday before the judge investigating the party the choice of Neurona as an electoral provider and It has been unmarked from the payments that the company made to a company in Mexico.

Del Olmo appeared as a defendant in the Court of Instruction number 42 of Madrid that investigates Podemos for alleged crimes of irregular financing and / or electoral crime in the context of that contract for an amount of 363,000 euros that the United Podemos coalition could not justify as an expense campaign before the Court of Accounts.

As reported in legal sources at the end of the statement, Del Olmo chose Neurona for political advice in the face of the elections because I knew his career in this field and without going into assessing whether or not to sign that contract the company of Mexican origin created a new company in Spain.

In this way, it dissociates itself from whether or not that merchant subcontracted in Mexico the services that had been entrusted to it and thus, from the flow of money from the party’s payments that ended up in Creative Advance Interactive, another company based in a neighborhood of Morelia, in Michoacán.

He has also specified that in the context of the development of these works, he dispatched with four people from Neurona, including his director in the different subsidiaries that the company has in Latin America, César Hernández. As he explained, he met him in 2018 and since then, they had a certain relationship. His points of view were interesting to him and that is why, when he made him a proposal for the general elections, he opted for his company. He has also confirmed that he had no interlocution with Elías Castejón, the administrator of the company that they founded in Spain to bill United We Can.

He has not been the only one who has appeared on this matter. The judge and the prosecutor in the case have questioned the person in charge of Finance at Podemos, Daniel de Frutos, who was also a joint administrator of the United Podemos electoral account from which the money came to pay Neurona.

As he explained, he authorized the payment to this provider because the expense was adjusted to the electoral budget and had no need to supervise service delivery because he was aware of it in two ways: on the one hand, because the videos and other services could be seen as they were sent to the party and, on the other hand, because their dissemination entailed the authorization of other contracts, such as with platforms of social networks in which visibility was given. He was, as he has stated, a supplier to so many and had no doubts raised about it.

On the other hand, he has been asked about the failed transfer of 75,000 euros that the judge has ordered the UDEF to investigate and in line with what ABC revealed this Thursday, he has explained that the Neurona account was not fully operational and that is why , Bankinter returned the money to United We Can. The training will provide the supporting documentation for this flow, the same that is already in the file opened by the Court of Accounts.

The works, under the magnifying glass

During the day this Friday, the head of purchasing of Podemos, Andrea Deodato, and as witnesses, several service providers of the reform works of the party headquarters have also appeared, a matter that is also under investigation because the original complainant, the former lawyer of the formation, José Manuel Calvente, related the surcharge with respect to the tender with a possible distribution of commissions or favorable deals.

As for the providers, the judge and the prosecutor have been interested in the origin of their relationship with the project and the services they provided. They have explained that the works in each of the cases were executed according to the initially agreed budget and if there were deviations, it was due to cost increases during execution.

For the popular accusation that Vox exercises, the day of statements has put on the table severe “contradictions” that open new lines of investigation. He is considering asking the judge for more proceedings, especially in relation to the works, because he has found disagreements in the treasurer’s testimony, as he mentioned a collapse in the building that the suppliers turned out not to know.

Meanwhile, the Podemos defense insists that “everything has been clarified” with these statements and the documentation provided and is now considering filing the case. The defense line focuses on the fact that for his part, everything was regular.

They hired some services that were provided and, in the case of the works, the tender was for a little more than 600,000 euros but because it was exclusively the architect’s project, who had calculated the possible costs with the minimum price tables that the City Council of Madrid. The budget that he presented later exceeded 1.3 million euros and finally, the work cost 1.4 million, then the deviation was not as high as Calvente denounced.