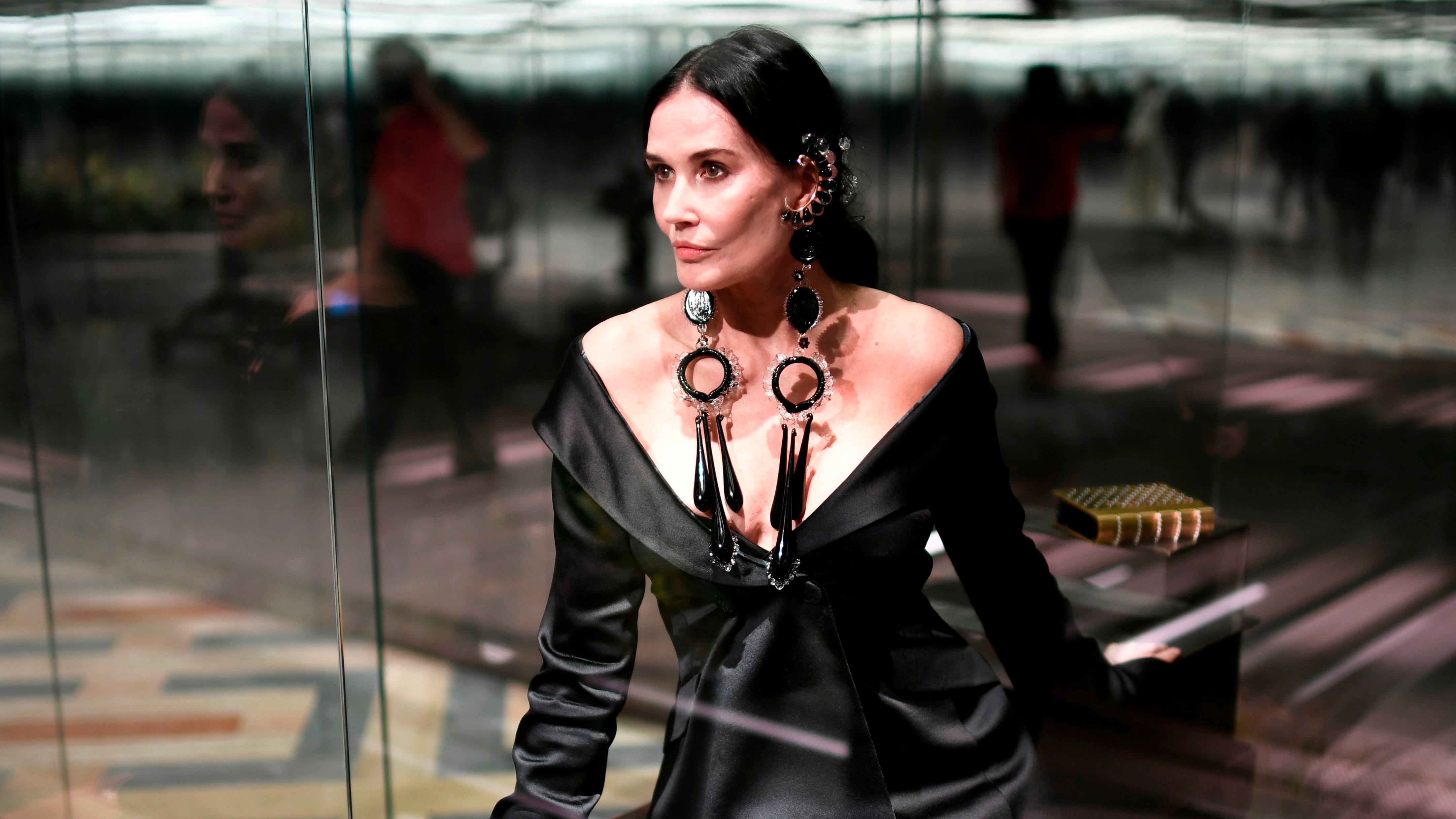 Fashion catwalks and haute couture especially are a commercial display, but also a fantasy to make the industry and consumers dream. In this eagerness to attract attention and continue to fuel the business, the firms this year have had to juggle to give a show in times of pandemic and without public attendance at their parades. Fendi set out to create surprises and did so with a presentation in which the collection that marked the premiere as creative director of Kim Jones shone for its staging but also for some of the stars who walked in it. Supermodels Kate Moss and Naomi Campbell were there, but it was actress Demi Moore – who left the role of front-row spectator for the first time in her life to become a model for a day – who made Fendi go viral.

With a spectacular black suit with a high neckline fitted to the shoulders and sophisticated oversized earrings, the actress took to the runway to make one of her life’s dreams come true, as she confessed in a conversation with Naomi Campbell on the show interviews that the model has on YouTube, No filter with Naomi. The problem is that Demi Moore’s participation on the catwalk has gone around the world not so much because of the model she was wearing but because of the appearance of her face, with too marked cheekbones and lips that encouraged a global debate about the excesses of the aesthetic touch-ups.

The actress, far from touching on this topic or showing an iota of doubt about the effects of her decision to become an occasional model, has told Campbell how happy she felt and in the video of the conversation her face appears natural, with little makeup and far from the shocking effect caused by the images of the parade. “I didn’t realize until I was done showing that I had just fulfilled a teenage fantasy,” says Moore of her appearance at Paris Fashion Week. “I had to stop and think before assimilating that I had just stepped on a catwalk accompanied by the most important models in history,” he says during his conversation with Campbell.

During the meeting she also assures that she would repeat the experience without thinking about it and that, after being in charge of opening the Fendi show, she affirms that she has discovered that the presentation of fashion collections is much more than simply showing clothes. “It seemed very special to me because I did not feel that everything was focused on showing some clothes, but on telling a complete story. It was magical and moving for me. Something memorable ”, the actress confesses to the model-interviewer.

The variety of models chosen was also the object of analysis during the talk that Moore and Campbell had and their reflections on the moment that fashion is currently living, trying to adapt to the need to reflect the different types of beauty beyond the stereotypes that have imposed the industry for years. Demi Moore states that she was touched to participate in something that she perceived as familiar and inclusive. An emotion that she summed up by saying: “I felt like a little girl.”

Naomi Campbell also wanted to contribute her vision of this parade at a different time due to the coronavirus: “Although there was no audience present, I felt that people were there. I did not feel any difference from other shows she has worked on, ”said the model. “I think it also helped a lot how the catwalk scenery was set up, with each of us having our own transparent boxes. That glass maze wouldn’t have let us see the public anyway, ”Naomi concluded.

Not a reference to the debate on social media about the face that Demi Moore showed during the parade. If the pang of criticism has affected the actress at some point, it seems that her response has been to show her face uncovered, little made up and excited by the experience she lived in Paris. To give his face again as the best answer to the speculation and controversy that his brief appearance on the catwalk triggered.

The actress has spoken freely on different occasions about the problems she has had with her self-esteem. In the 1980s Demi Moore, who is the mother of three daughters, Rumer, Scout and Tallulah, had to enter a center to rehabilitate her addiction to drugs and alcohol. History repeated itself in 2012 after collapsing after months of partying and eating disorders that led to worrying weight loss. After this second rehabilitation, the actress opened up to recognize her problems and came to undress emotionally in a public event to give an example that these black stages of life can be overcome: “For years I was in a spiral, on a path of true self-destruction” , said. “No matter how successful I’ve been, I’ve just never felt good enough, good enough,” said the actress.

Moore went into crisis, a point from which she came out with the help of her loved ones and which marked the moment of her rebuilding, as she herself has recognized. He also recognized that his priorities had changed. Beauty, including cosmetic surgery operations, is no longer one of them. She has stated that she prefers to opt for a health-centered lifestyle for herself and her family: “My relationships are more important and what I do takes second place,” she said at a Goop Health meeting while having a chat with Gwyneth Paltrow and Arianna Huffington.